Tuesdays for Travis - Lake of the Woods 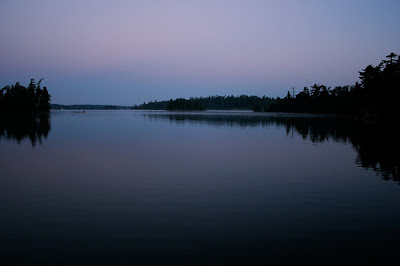 Lake of the woods is comprised of 11,800 hectares, and is situated near the borders of Ontario, Manitoba, and Minnesota. The park lies within a transition zone where three distinct natural environments meet -- northern, southern and prairie. The forest is a jumble of species, with southern hardwoods such as elm, ash and basswood growing next to Manitoba maples, and northern spruce and jackpine.

The mix of species also shows up in the park's birdlife. The most far from home are pelicans, who have colonized several remote islands and waterways in the park as permanent nesting grounds. Other winged strays include the yellow-headed blackbird and the western meadowlark, both Prairie birds. You'll also spot the scarlet tanager, redheaded woodpecker and Baltimore oriole, all usually found further south. 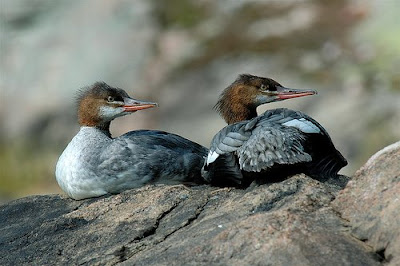 Another type of waterfowl is the Common Merganser, male and female pictured here.

The Common Merganser is often nicknamed Sawbill as it has a long, narrow bill with serrated edges and a hooked upper mandible which helps the duck catch and hold onto fish. It dives underwater to catch its prey, chasing small fish and frogs, newts, and aquatic invertebrates. It is usually seen in large flocks and is generally found on fresh water. Its nest is built in a tree cavity or among the rocks and lined with down where 6-12 pale buff eggs are laid and incubated by the female. These hatch after a 28-32 day incubation with the chicks leaving th enest soon after but not flying until 9-10 weeks old. This species is common throughout most of North America at different times of the year.

Wild rice bays are excellent feeding ground for migrating waterfowl. Duck hunting on Lake of the Woods is among the finest in the world. Grouse, sought for their delicate flavor, are plentiful as well.

Aggressive Northern Pike can be found year-round lurking in weed beds and shoreline structures with reports of sizes in the range of 5 to 30 pounds. The best time for Muskie fishing is July, August and October, Top Dancing Smallmouth Bass, Schooling Crappie and Delicious Walleye are reason enough to make Lake of the Woods, Canada your next fishing destination. There are several outfitters who can accompany you to safe fishing locations.

The clear deep water of Whitefish Bay is one of the few habitats for Lake Trout on Lake of the Woods. This superb fishing area is a relatively short boat trip from many of the Island resorts in that area.

Man, this makes me want to go fishing so bad.

The Porcupine Hills post was updated to include photos of the buffalo jump since you wanted to see it.

There is no better tasting fish than walleye.

Barbara,
what a lovely part of the world you live in.
I love the photos you've posted (particularly the hotel you get to walk past every day. Gorgeous!)

Nicola, welcome and come again. The parks posted in the Tuesday for Travis are quite a distance from Toronto, being in the north-west part of Ontario. I chose them for their remoteness, a way to show being away from the city and people. Where you and nature are a part of each other.

Being a writer, it is easy to imagine any kind of story springing from each of the photos.

I had the good fortune to enjoy some time on Lake of the Woods a few years ago. Beautiful country. Great fishing.