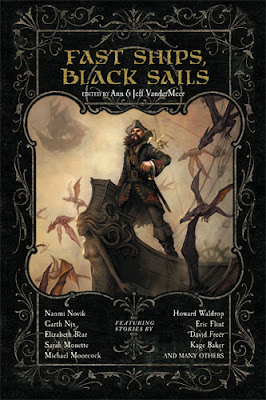 Arggggh! To help commemorate the Pirate Guys at Talk Like a Pirate today’s book review of FAST SHIPS, BLACK SAILS is an anthology of science fiction and fantasy pirate stories published by Night Shade Books. For other participants to the International Talk Like a Pirate day please visit here.

Do you love the sound of a peg leg stomping across a quarterdeck? Or maybe you prefer a parrot on your arm, a strong wind at your back? Adventure, treasure, intrigue, humor, romance, danger - and, yes, plunder! Oh, the Devil does love a pirate - and so do readers everywhere! Swashbuckling from the past into the future and space itself, Fast Ships, Black Sails, edited by Ann and Jeff VanderMeer, presents an incredibly entertaining volume of original stories guaranteed to make you walk and talk like a pirate.

There will always be pirates, even today in the Mediterranean and in the seas around Africa. In the VanderMeer Anthology pirates have moved into space and beyond, chartering the vast unknown while making their livelihood at what they know best. Within these covers is the perfect pirate story for any reader, presenting classic and unique stories of buccaneers sailing the seas of the cosmos or present day Earth.


Boogum by Elizabeth Bear and Sarah Monette – This first story is about piracy in space with unusual cargo taken from a captured freighter and a semi-sentient spaceship with Captain Black Alice who finds herself making a sacrifice.

I Begyn as I Mean To Go On by Kage Baker – a creepy classic pirate story. Two castaways are taken onto a ship, Martin Luther, whose captain has a bad reputation. By the law of the sea they are obliged to work on the ship, and things become interesting when they find their way to an ancient emerald mine in South America.

Avast, Abaft! by Howard Waldrop – found this one humorous and similar in nature to the HMS Pinafore and the Pirates of Penzance.

Elegy to Gabrielle, Patron Saint of Healers, Whores, and Righteous Thieves by Kelly Barnhill – about a woman with the ability to use magic whose daughter belongs to the sea.

Skillet and Saber by Justin Howe – a new sailor on a ship is assigned as the cook’s apprentice with some comedic episodes.

The Nymph’s Child by Carrie Vaughan– This is a story of a woman who poses as a man to be allowed to go to sea, and when caught by pirates must give up her daughter.

Ironface by Michael Moorcock – A very short piece about pirates in space on a trip to Venus that I felt should have been longer.

Pirate Solutions by Katherine Sparrow – This is an experimental piece about computer analysts who drink from a bottle of rum to become pirates, and setting sail in an old ship with masts. When they reach their isolated island, and dig up a treasure chest full of ancient rum bottles, they send out messages in bottle which in turn, bring other computer geeks from around the world to join them.

We Sleep on a Thousand Waves Beneath the Stars by Brendan Connell – A story about hungry pirates who don’t discriminate over what they eat.

Voyage of the Iguana by Steve Aylest – A story with a weird list of journal entries on said voyage with mishaps. This I found boring.

Pirates of the Suara Sea by David Freer and Eric Flint – This is a about space pirates in an alien sea where the vessel is manned by a woman captain. She manages to jettison part of the cargo when the pirates arrive, with special plans for the intruder’s captain.

A Cold Day in Hell by Paul Batteiger – provides a unique setting with three masted sailing ships on ice skates whizzing across frozen seas. Two ships leave Boston on an expedition to capture The Queen’s Revenge and its captain Frost, considered to be more monster than human.

The Adventures of Captain Black Heart Wentworth: a Nautical Tail by Rachel Swirsky – This story is great fun, featuring rat pirates and later a shipwrecked cat who had eaten her previous lover.

Araminta, or, The Wreck of the Amphidrake by Naomi Novik – An alternative Earth awaits the reader where England is ruled by Roman deities and the sacrifices of women are dominated by mens’ will. Araminta, the daughter of an important noble is kidnapped by pirates, but she has a few unique abilities to assist her in outwitting them.

The Whale Below by Jayme Lynn Blaschke – An alien story of a pirate spaceship seizes a ‘whaler’ ship only to find no one on board.

Beyond the Sea Gate of the Scholar-Pirates of Sarsköe by Garth Nix – This story is about a gentleman rogue and his magical puppet facing a priestess who happens to be a cannibal. There are some interesting scenes with shapeshifters.

There were several authors in this anthology I had never read before, and will be looking up more of Rachel Swirsky, Katherine Sparrow and Garth Nix.

Amazon.co.uk
Posted by Barbara Martin at 02:17

Oh, this sounds so fun! I'm going right over to Amazon.com after I post this. Thanks for the review, Barbara.

Shauna, it is alot of fun. The nice thing I like about anthologies is you don't need to read every story one after the other. They can be read once in awhile at a whim when time may be short.

I'm glad there are some space pirate stories in this too, Barbara - I can join in Intergalactic Talk Like a Pirate Day! Oh aarrrgghh, time to get some rum down my neck!

International Talk Like a Pirate Day?! Who knew!? And I have a little over an hour left since I'm on the west coast. However, only the dog and I are up now! Great review!

Arrgh, lassie. I'm glad ye reviewed yonder book. I've a'seen it at my library and wonderrrrred if I ought ta check'er out. Ye convinced me.

Barrie, now you can prepare for next year...every September 19th. The book is a fun read though not for children.

Scott, you'll like this one for sure. The first story really sets the stage for the remainder.

I must admit I once enjoyed the Hornblower series - but he fought pirates...

Ah, nothing like an old pirates' story to bring back memories of my younger self. Many thanks for such a fantastic review.

This seems like a fantastically good time for all pirate lovers, Barbara. I'll be sure to get a copy and settle down with it. Thanks so much for the tip.

RuneE, in this day and age, pirates have rights too. Though I did appreciate the time when they were blown out of the water.

Ruth, welcome. Pirates seem to provide the right amount of conflict in any story.

Rick, pirate stories seem to be the rage now.

Shiver me timbers, Barbara, I just put this book on my shopping list, yesterday :)
Very nice review. It seems that this is an enjoyable book. I recommend seeing more books by Garth Nix. I personally like his works :)

Mihai, with the multitude of books that are published every year, sometimes it's difficult to pick and choose. Anthologies seem to be a good bet all around.