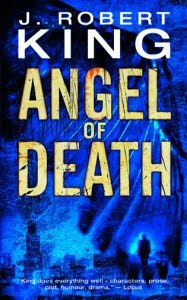 The excerpts are written for a mature reader.


Assuming after the third ring that the doorbell didn’t work, Investigator Leland knocked. She stood in the lee of a storm door held together by duct tape. The cool gray winds of a December 7th morning breezed past her.

It had been standard police work. Lots of dead-end leads. Lots of waiting for someone to file a missing persons report. Lots of phone conversations assuring cottagers and farmers that everything that could be done was being done. After two days of office work, Leland had at last been asked by Detective McHenry to help him knock on doors and canvas the Bohner’s Lake area to find out the identity of the body.

She looked down at the crime scene photo in her hand. In it, Sergeant Banks squatted gravely beside a dark pine tree and propped up a stiff collie mutt. At the zenith of a washed-out foreground, the dog looked spectral. Its frozen legs were poised in a flat line on tiptoe. The effect made the collie appear to be dashing pell-mell through the picture, past Banks’s stern, down-turned face. The dog’s eye glowed with the flash, as if Banks held a light to the blown-open back of its skull.

“I feel like a Goddamned trophy hunter,” Leland murmured to herself.

The door eased back, shuddering a little. Warm wet air came from within, along with the mill-wheel tumble of a stove-sized humidifier. A thin old woman stood there in a faded cotton housedress. A Kleenex jutted out, ready between two buttons. “Yes?”

“Sorry to bother you this morning, ma’am. I’m Investigator Leland of the Burlington Police Department – ”

“If you’re here about the cardboard, I didn’t know it could be recycled until just last week, and I’ve got it ready for the bin this time, if you want to come see – ”

Leland laughed in quiet dismissal. “Actually, ma’am, I’m looking for the owner of this dog.” She held up the photo.

The old woman peered, unblinking, at the picture. “You probably think I should have reading glasses or bifocals to see something like this, but I’ve had the new cataract surgery, which lets me read a book and look out at the sunset without any glasses at all, or see this picture of the dog and see Mr. Koenig walk that dog just about every evening at eight thirty before the gas station stops selling those little flasks of devil water that I’ve signed petition after petition against, always the first or second name…”

“Mr. Koenig?” asked Leland, writing. “And he lives where?”

“Three houses down, on the right, toward town, the one that still has the Christmas lights from three years ago up on the eaves even though he hasn’t plugged them in for two Christmases and he’s not turned them on yet this season if they work at all anymore. I haven’t seen him in a while, but he keeps those irregular hours, a newspaper man for the Gazette, and coming and going at all times and working on that old junker of his in the middle of the night sometimes, trying to keep a twenty-year-old car going with these two-day-old computer car parts they have nowadays, and him without the first bit of mechanical skill but too cheap to buy something better…”

“Thank you, ma’am,” Leland said, tucking the photo into her breast pocket. “You’ve been a great help.”

With no trace of humor on her face – the shape and hue of a garlic clove – she said, “Too bad about that dog of his. Sometimes it would break loose and dig in my petunias. Not that I would have wanted it dead – hit by a car, right? Forty-five’s too fast for a residential block.”

“Thank you, ma’am,” Leland said, backing out of the door space and letting the storm door sway inward.

The old woman caught it and held it ajar as Leland backed away. “And if you’re going to get so up in arms about cardboard in the garbage, what about these folks that pile it in with their leaves to burn and we have to be breathing that all day long?”

Leland marched away. Her black boots splashed through the dead oak leaves, brown and gold like muddy water. Behind her, the woman’s voice continued to labor shrilly, a too-small pump struggling in anonymous obsession to empty a too-deep pit.

The oaks were tall and stout here, their crags deep with gray shadows. The sky above was an acrylic blue, and a wintry wind tumbled brown leaves over the rim of the Bohner’s Lake bowl and down toward the water.

Mr. Koenig’s house was on that rim, perched like a ship breaching the head of a standing wave and about to plunge down the trough beyond. The land dropped away behind it, baring a line where clapboards gave way to gray cement block. The white Masonite boards on the main floor were curved with inexpert installation and years of seepage, but they clung to the frame with all the tenacity of a gunwale on a ship.

She knocked. In good intention, someone had painted the white door red, and then left it to peel behind a rusting screen. No answer. Again she knocked, and again, nothing.

It was a Tuesday. He could well be at work, but a rust-riddled gray ’89 Olds sat on the cement slab beside the chimney. He couldn’t have walked to the Gazette from here, but could have carpooled. It wasn’t enough to warrant a search.

Unholstering her walkie-talkie, she switched it on. “This is Investigator Leland. I’m in the fourteen-hundred block of County P. I think I might’ve found our victim. Anybody near a phone? Over?”

The crackle and hiss of static answered at first, and then Banks’s butch voice: “What do you need, Leland?”

“I need somebody to call the Gazette, see if a Mr. Koenig – a newsman – see if he’s there.”

“I’ll get back once I know something.”

Leland stowed the walkie-talkie and knocked again. Still, no response. She stepped from the front stoop and strolled slowly around the cottage. It had the decent dirtiness of most middle-class bachelor places, eaves stubbled with dirt, shingles beginning to curl, storms and screens in random assortment, flower beds gone to volunteers and weeds, grass left overlong after the mowing season, sticks lying on the walk. Ah, a dog tether, and no dog on it – and no dog barking inside. Perhaps he and his dog were at the vet, or on vacation.

She glanced back at the old woman’s house. The storm door was closed, though the woman still haunted its frame. This man was the same as she. Perhaps this whole block was the same, shipwrecked souls clinging to whatever sargasso they could gain and hold.

Leland descended a set of concrete steps beside the house. She came to a wide window of the walkout basement, a sixties design in aluminum and single pane glass, actually releasing more heat than it held in. In fact, the window where she stood poured dry furnace air out through its open side casement –

He had worn no jacket the night he was killed.

On the desk within was a framed photo of a shaggy collie mutt and a similarly hairy man embracing her. His bearded face smiled, and the dog, too, smiled.

Leland blinked, and the photo changed – half the dog’s head was gone and its remaining eye was gray with death, the man’s neck was vacant and his embracing arms ended in a pair of stubs.

“Leland, come in, over,” crackled the walkie-talkie.

“They’ve already given his job away.”

I believe this is a very exciting book! I like detective novels provided there is a happy end for the main characters. You have done a great job, writing this review!

Wil, the excerpts presented here belong to the first three chapters which the publisher has allowed me to post here. The book review will come later.

I think the author's premise is excellent.

Sekhar, nice to see you. This dark story has great promise.

I recently came accross your blog and have been reading along. I thought I would leave my first comment. I dont know what to say except that I have enjoyed reading. Nice blog. I will keep visiting this blog very often.