The Book of Secrets by Chris Roberson (Book Review) 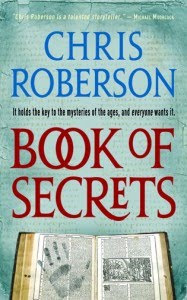 Reporter Spencer Finch is embroiled in the hunt for a missing book, encountering along the way cat burglars and mobsters, hackers and monks. At the same time, he’s trying to make sense of the legacy left him by his late grandfather, a chest of what appear to be magazines from the golden age of pulp fiction, and even earlier.


Although Angry Robot Books lists this book under the Thriller / Urban Fantasy category, it contains multiple genres: short stories similar to the noir pulps of the forties and fifties; adventure/action, spiritual journey and fantasy. The story comes in layers providing clues along the way. Some seem insignificant until the end of the book until the ‘ah ha’ moment.

Spencer Finch has been trying to find his way in life, struggling with situations that occur during his life as a journalist. He has a collection of people that he uses to acquire information from or do the legwork on portions of projects for him. Expect the unexpected as the clues are unraveled. Although the book has its noir and pulp fiction clichés, they are entertaining and fun.

Finch tries to unravel the mystery of his grandfather’s legacy contained in a cardboard box: a collection of old magazines that hold short stories written by him, books, type written pages, a loose sheet with foreign writing, plus a locked wooden case without a key. In alternative chapters are the short stories his grandfather wrote, revealing different aspects of a character known as “The Black Hand”. These short stories are in multiple genres as well: western, historical, swash-buckling sea adventure, crime. They all contain clues, and those who like noir and crime pulp will be delighted. I was.

In digging up information on a reclusive millionaire, Finch travels across country as the clues appear, and so does the body count. While finding out about his mysterious grandfather, Finch learns things about himself. He’s not perfect; at times downright stupid when going somewhere without backup or a safety net. Though he bumbles at times, Finch manages the detective work

The short stories Finch’s grandfather penned move backward in time, beginning with “The Talon’s Curse” in 1939, a noir mystery set in San Francisco, followed by a western in 1918, a rogue tale in 1833, a swash-buckling sea adventure in 1705, and so on. Mr. Roberson uses these fantasy stories layered in with the crime novel that progresses to solving the mystery, and the fantasy to early mythology and beliefs thus producing a portal to another place.

The ending is WOW. It wasn’t anything that I thought it would be, as the previous chapters stuck to the mystery involved in crime noir in combination with the clues in the collection of short stories by Finch’s grandfather.

This book was refreshing, fun, and with laugh out loud sections. I would recommend it for anyone wanting an entertaining read, to be carried away into the stories and shutting out the outside world.

Amazon.co.uk
Posted by Barbara Martin at 11:59

Sounds very intersting. These kitchen sink books, featuring a lot of different genres are becoming popular and I'm happy to see it.

This book sounds fascinating, Barbara. Thanks for the review.

For being released on August 6th, it is already into its second print run.