The Meaning of Night by Michael Cox (Book Review) 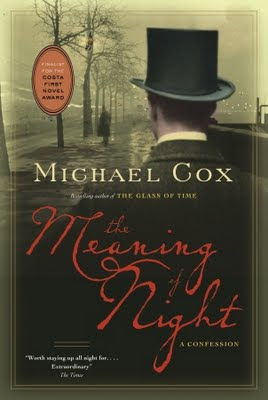 “After killing the red-haired man, I took myself off to Quinn’s for an oyster supper.

"It had been surprisingly -- almost laughably -- easy. I had followed him for some distance, after first observing him in Threadneedle street. I cannot say why I decided it should be him, and not one of the others on whom my searching eye had alighted that evening. I had been walking for an hour or more in the vicinity with one purpose: to find someone to kill. Then I saw him, outside the entrance to the Bank, amongst a huddle of pedestrians waiting for the crossing-sweeper to do his work. Somehow he seemed to stand out from the crowd of identically dressed clerks and City men streaming forth from the premises. He stood regarding the milling scene around him, as if turning something over in his mind. I thought for a moment that he was about to retrace his steps; instead, he pulled on his gloves, moved away from the crossing point, and set off briskly. A few seconds later, I began to follow him.”

The reasoning behind this cold-blooded murder is soon revealed in the following opening pages. The killer, Edward Glyver aka Glapthorn, confesses to the killing and others he has planned.

Portions of Edward’s story are told by an assorted collection of people in his life until his complicated past is revealed. Bella, a courtesan from “a highly select club…catered for the amorous needs of the most discerning patrons of means”, Le Grice, a best friend from his school days, and others, with whom he is careful not to reveal too much to.

In his childhood he was raised by a single mother, through whom Edward develops a love of books, and attended Eton. It is at Eton where he meets Phoebus Daunt, soon to become his nemesis and the reason behind Edward’s shameful departure from the school.

Ten years after his mother’s death, Edward goes through her papers to learn she was a successful novelist and finds her diaries: small, black books that reveal his true identity. He is not Edward Glyver, but Edward Charles Duport, a member of one of the oldest and most powerful families in all of England. Edward believes he is the rightful heir to the large country estate, Evenwood. Edward decides to reclaim his birth right and learns that Lord Tansor has designated his heir as the wicked Phoebus Daunt. One of the motivating factors for Edward’s obsession is the Evenwood library which contains rare books from the 15th century.

Edward is obsessed with the theft of his birthright, and books. In proving his birthright he searches in the more disreputable sections of London where he learns deep dark secrets.

Phoebus Daunt is a poet and a leader of a gang of thieves, thugs and counterfeiters; and locates an inscribed copy of Donne’s Devotions that confirms his suspicion that Glapthorn is Glyver is Duport, the true heir to the Tansor fortune.

The world Edward inhabits is one of opium, brothels, revenge and murder. This is a suspenseful mystery that needs to be followed to the end for a brilliant conclusion.

Michael Cox has placed various epigraphs at each chapter and section breaks, along with copious footnotes. These quaint footnotes provide brief explanations of terms and locations within the book, for example, “Waterloo Bridge was known as the ‘Bridge of Sighs’ because of the number of suicides who had leaped to their deaths from it.” There is wonderful, thorough detail in the description of the locations, the people, and the era in which this book is set.

There are a few loose ends in this book that may be explained in the sequel, “The Glass of Time”.

I recommend this book for anyone who likes detailed description set in a Victorian style of writing. The multiple genres are: literary, mystery and detective, and historical.

Sounds like a great book, Barbara. If only classes didn't start tomorrow!

This was such a compelling review that I'm going to purchase this book and read it. Thanks ever somuch, Barbara.

Teresa, I'm certain there will be time to read it later. It would be an excellent read in a cozy corner with tea.

Rick, you will not be disappointed.

If you liked this I bet you'd like C. S. Harris's St Cyr mystery series. They are beautifully written historicals.

Ooh. I saw this one in the library last week and wondered. Now I know. I'll check it out next time. Sounds perfect for an autumn night.

Interesting book review Barbara, thank-you. I'd like to mention too how much I enjoy links provided in your Conservation and Nature Connections, ie 'Of Cats'.Always thought lions were lions and had no idea of such tragic history of the Barbary Lion species. Thanks again.

From the London of Sherlock Holmes - but the other way around?

This sounds like an engrossing read. I will check it out, thank you.

Thanks for the interesting review, Barbara. It sounds as if the author meshed setting and plot perfectly.

Charles, I have them and they are as you say.

Cloudia, it's interesting to consider what turns some people into killers.

Pamela, there are many twisting turns to keep a reader interested.

Tony, I'll chekc out your recommendation.

Gary, the history behind the story is exceptionally well researched.

Pam, apart from reading a variety of genres, I have a keen interest in our environment and the flora and fauna of the planet.

RuneE, exactly. A person with nefarious intentions after being betrayed.

Leigh, the book keeps a reader thinking as several characters and clues, including red herrings, are revealed.

Shauna, this story was put together in a unique way with a riveting end.