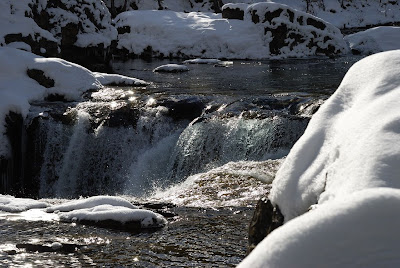 The big snows have been skirting us and the cold weather comes and goes. Today is warm enough for a light jacket and much of our snow is gone. I feel sorry for the critters who have their white winter gear on.

New Year greetings Barbara from all of us at Necky Knoll House!

It does sound as if you are having unusual weather at the moment - I hope your planet's weather stabilizes. Over here it has been sunny, with a few giraffe snowflakes!

We have had an on-and-off winter like you. Periods like your beautiful photo, and periods with fog and rain. At the moment it it is - 6 degrees C and 5 cm with snow where we live.

We've only had any real cold air in the last few days, but that isn't totally atypical for down here. We did have gray rainy skies for well over a week, which brought some folks down.

Hot chocolate with you sounds divine!

How's my winter going? LOL! I just came back from Iqaluit, in the High Arctic, and the temperature there was in the minus forties with the wind chill. Not to mention there was always wind, since that was the tundra, so there were no trees to act as a windbreak.

It's so good to be back in Toronto! The weather feels incredibly mild here.

Leah, one of those days'll be a mild chinook coming in over the Rockies. Those are wonderful after a four to six week deep freeze like those in the late 60s and early 70s where it didn't get above -20F but went lower most days, some overnights of -45F.

Raph, so glad you could pop over. Those intergalactic flights are marvellous.

RuneE, hopefully once the weather settles we will be back to what we consider normal. Or Mother Nature has a bigger surprise in store for us.

Chalres, sun is an important factor for me to keep my mood elevated. I just look at rain as being something the vegetation needs more of to wash away the pollution and grime of the atmosphere, and once that's been done then the sun will shine more brightly after the clouds pass.

Cloudia, Aloha! Oh, those sun drenched sandy beaches, coconut trees, aquamarine water in the bays, and the days you get rain it's so clear and beautiful afterwards.

Marian, Baffin Island tends to be nippy in the cold department. Once I'd considered working there.