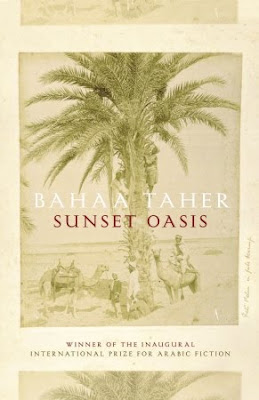 “Set in late-nineteenth-century Egypt, this award-winning novel introduces the work of an acclaimed Egyptian writer for the first time to Canadian readers.

“When disgraced military officer Mahmoud Abd El Zahir is sent to govern the remote Egyptian oasis of Siwa, he knows the danger he faces—two of his predecessors were murdered. But having been accused of disloyalty to the current regime and its British overlords, he has little choice. Rather than stay behind in Cairo, his Irish wife Catherine, insists on accompanying him, hoping to reinvigorate their marriage and to pursue the secrets of Alexander the Great, who she feels convinced is buried in Siwa.

“Neither is prepared for the stultifying heat, the hostility of the townspeople—all but the seductive and troubled Maleeka, who develops a strange friendship with Catherine—or the astonishing and disturbing events that befall them in the dreamlike other-worldliness of the Sunset Oasis.

“In turns mesmerizing and shocking, Sunset Oasis is a complex tale of love and frustrated passions, and of the vicissitudes of power during a time of change, as it tells of people struggling to free themselves from the grip of the past. It is a striking, haunting work by one of the Arab world’s most celebrated writers.”


This book took me right into story immediately, immersing me in the political climate of the time along with the cultural differences of the Egyptians and the nomadic people with the British overlords. Mr. Taher has an excellent way of introducing the conflicts which produce a variety of responses from Mahmoud, Catherine and the residents of Siwa. The mesmerizing description of the desert with its inherent dangers, the caravans, the Bedouin, the townspeople of Siwa and their beliefs, including the historical background all tie in the various details to make the story captivating.

Once I began this interesting book I found it difficult to put down. I wanted to know more about the people who lived so far removed from Cairo, via a caravan trip of two weeks along a trail that may disappear at any time with the winds shifting the sand over the tracks or the wells where the camels were to be watered. A mighty Persian army from long ago on its way to Siwa had been buried forever under the shifting sands. There were also the hazards of wolves, snakes and scorpions that frequented the campsites.

There were situations Catherine got herself into that I recognized would lead to conflict with the townspeople: wearing men’s clothes and going without a veil, and going to homes without being invited first. The woman seemed oblivious to the reactions she was creating while going on about her explorations of the town and nearby areas in the search for Alexander the Great’s burial site, other antiquities and painted hieroglyphics.

Mahmoud is stuck in a tough situation and location due to his alleged disgrace. He does the best he can under the circumstances and procedures he has been provided by the British overlords.

Many of the secondary characters hold their own mystique within the story: Sergeant Ibraheem, assigned to Mahmoud, is elderly with many grandchildren to feed as his children had died of an cholera epidemic; Sheikh Yahya, an elderly scholar, wise beyond his years; who perceives trouble brewing among the council, and his niece, Maleeka, married off to a man old enough to be her grandfather to settle her mischievous ways; Maleeka, a precocious girl, interested in things no one before or after her was interested in, such as the statues and paintings in the ruins of antiquities, of her ability to sculpt from a handful of clay statues that matched those in the ruins perfectly.

I recommend this book for anyone wanting to escape to another place to become immersed into a different culture in the heat of the desert.


BAHAA TAHER was born in 1935 in Cairo, Egypt. After many years of living in Switserland, he has recently returned to Egypt. Now one of the most widely read novelists in the Arab world, Taher has received the State’s Award of Merit in Literature, the highest honour the Egyptian establishment can confer on a writer. He is the author of four collections of short stories, several plays and works of non-fiction, and six novels: East of the Palms, As Doha Said, Aunt Saftyya and the Monastery, Love in Exile, The Point of Light, and Sunset Oasis, which won the inaugural International Prize for Arabic fiction in 2008.

Translated by Humphrey Davis who has lived in Cairo for more than twenty-five years.

Amazon.co.uk
Posted by Barbara Martin at 20:25

This books sounds fascinating, Barbara. You've added yet another book to my Must Read list. Any suggestions for how to increase the number of hours in a day?

Oh, that sounds like a good read, I will have to look into it.

Bernita, this is certainly not a book to be missed.

Teresa, I have my future reviews to do as well as my own TBR shelved and waiting. Take it one book at a time.

Reb, the descriptions of the desert and the various characters are superb.