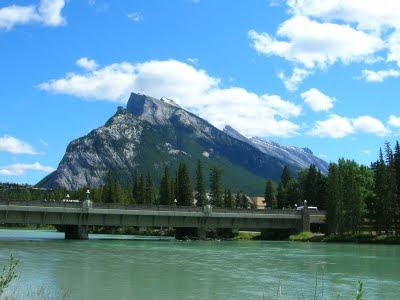 
During my early childhood trips to Banff in Banff National Park one of the best experiences was crossing the Bow River over this bridge. Crossing meant going to: the trout fish hatchery (now closed), the Cave and Basin lower pool (closed due to a tiny snail known as the Banff Springs snail which is considered threatened -- I did a guest post at Shelley Munroe's website last year where I mentioned the snail and its environment), the Administration grounds with lovely manicured lawns and flowerbeds with gazebos, the Upper Hot Springs pool, the Banff Springs Hotel and its famous golf course.

When viewed from the side or above from the sidewalk and leaning over the stone railing underneath each of the lamp-posts, one can see that there are Indian heads in full feather headdress relief. These always intrigued me, and were part of the magic that this town held for me: and still does. 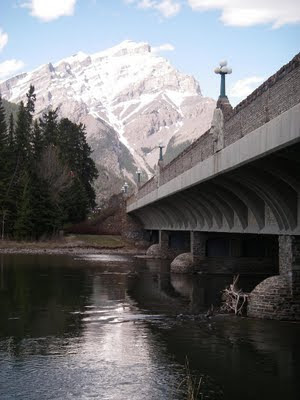 The Bow River bridge was built in 1923 and the Indian heads were designed by James L. Thomson.

I love the pictures. Thanks for sharing, Barbara!

Magnificent or majestic? Not sure which best describes such a stupendous view.

its a Beautiful place and very well captured Barbara

Have a nice week ahead and Season Greetings to you :)

I'm as you know a frequent "bridge photographer" and fell of course for that bridge. The desihn reminds me of some of the concept used in some of our own bridges made aboutb a 100 years ago.

I dearly love ornamental touches on bridges - removes them from the category of merely utilitarian structures.

I haven't bee to the Rockies for years...but maybe this summer. Your photos are tempting.

Bridges are so often kind of magical places. Not sure why but they've always had that feel for me.

Teresa, you're quite welcome.

Leah, everywhere in the Canadian Rockies provides a supreme landscape to feast one's eyes upon.

Josh, a perfect place for anyone.

Samson, it's a place dear to my heart, as many of my previous posts attest to.

RuneE, I'm glad the bridge appealed to your knowing eye.

Bernita, the lamp-posts are a nice touch too. I've not seen similar ones any place else.

EG, book well in advance as the accommodation fills up quickly.

Charles, I've always had a special place in my heart for the bridges in Banff and Jasper as my grandfather put up the first wooden ones in the early 1900s under contract with the government.

Kia ora Barbara,
How wonderful, and as usual just stunning places you share with us. To know the connection is so deep within you makes me look at these photos again slowly and carefully. Thank you for this place you have here, and the most wonderful of Yuletide greetings to you.
Aroha,
Robb