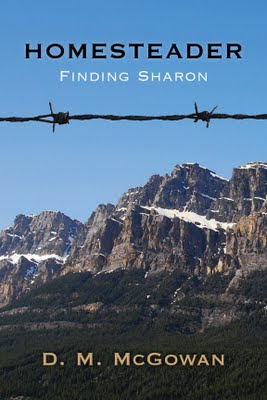 “Staking a claim to a homestead in the rugged, untamed Canadian frontier of the 1880s was hard enough. But when someone tries to run roughshod over the “nesters”, a man has to take a stand.

“There is more than bad weather from Hank James to contend with as he rides in search of the land of his dreams and the woman of his heart. Portis Martin, manager of a large cattle company, has no use for the small homesteaders that have begun to pepper the area…and he isn’t afraid of using every dirty trick he knows to run them out.

“And Portis had been doing a pretty good job of it—until Hank James and his partner arrived.

“The dreams of early homesteading were not always strong enough to see them through adversity, but with Hank James on their side, the people might just find a way of uniting for the common good and building a dream that can endure.”


This western story opens in 1886 in foothill country near Cochrane in the North-West Territories of what will later become Alberta. Henry “Hank” James, late of Farwell (Revelstoke, B.C.), is on a mission to find a woman. While in Farwell Hank James had built a prosperous freight business and, what he thought, a promising relationship with Sharon Dalton, housekeeper for the magistrate. Sharon had left Farwell in September 1885 after learning that the B.C. police knew about her past and association with some outlaws in Missouri. Hank wasn’t too concerned as some of those outlaws had been his relatives.

After deducting that Sharon had taken a train east to Calgary, Hank, and his partner, Scott Gilmore, went east to search for her. Hank’s other intention for going east was to locate appropriate land for a cattle and horse operation under the Homestead Act. Gilmore is half Lakota Sioux, raised in St. Louis, Missouri with a university education, and from time to time educates Hank James.

A neighbour, Lottie McAdams, is running a homestead after the death of her husband and trying to keep that fact a secret. Under the Homestead Act women had no rights to own property, only men were allowed a quarter section consisting of 160 acres to prove up by making the required improvements.

Portis is a nasty antagonist, keeping the story going well with all sorts of conflicts. He’s used to getting his own way, and when Hank James gets back at him legally he turns to more ruthless methods.

David McGowan has history well documented for the time with the homesteading, the lack of rights for women (considering they were only a man’s property), the North-West Mounted Police, the special promotion that the Canadian government in Ottawa gave to the European and English nobility and gentry to open up the land for business, over the single family homesteading operations. If the small operation homesteaders were run off by the cattle barons, Ottawa tended to look the other way or take sides with the larger ranches.

The story moves along at a good clip with action and new conflicts in each of the chapters which are eventually resolved. There is a continuity to the story without any of the slumps sometimes found in novels. Does Hank James end up with Sharon Dalton? I’m not telling. But I will say that I didn’t want to put the book down once I began it because each chapter urged me on.

Something I really appreciated was that Mr. McGowan included an Author’s Note to verify some of the historical episodes related in the book, although I’m well versed in the history of Alberta and Saskatchewan.

I look forward to reading more of Mr. McGowan’s western books as I like stepping back into history in western Canada. Some times it feels like I’ve gone home because there are phrases that have carried over from those early years to now.

Amazon.ca
Posted by Barbara Martin at 22:04

I must admit that my current book is called something like "Real World Camera RAW", so maybe this would be a suitable antidote? :-)

Thank you for the nice comment, and I wish you and your dear ones a Merry Christmas and a Happy New Year!

I wish you a wonderful Christmas and New Year, in your new home. Hope you are settling in well. Thank you for your interesting blog and your treasured bloggy friendship throughout the year!

Oh, that sounds fascinating, will have to look for that too!

Sounds pretty good. Not the kind of western I usually read but I'll check up on it.

RuneE, if you want to learn a little more about western Canada this book would fill you in on some of the history.

Phoenix, the book is a good read.

Thank you for your good wishes for the season, and your beautiful gardens.

Reb, being an Albertan you would love this book.

Charles, it does have gun fights complete with weapon specs, messy altercations, interesting court room scenes to rival Perry Mason, Blackfoot painted for war, and many other incidents.

Cloudia, welcome and may Santa bring you the present you desire: a copy of this book.

My researches have suggested that women were "allowed" their section of land, but were unofficially discouraged because the incredible workload was considered too heavy for one person, man or woman. Men were officially AND unofficially encouraged to become a couple as soon as possible if they were not already. In the Abernathy district of Saskatchewan, two cases are mentioned of homesteads which failed economically, the reasons being that the single women who ran them had to hire extra hands....which caused them to run in the red. Single men never lasted either. Sometimes it is hard to remember that a farm is not just a home, it is a business first, and a homestead second. Women never had problems inheriting the parcel of land if their husbands or fathers died, for instance, and if they had the money to purchase their plot from the CPR, (who of course got every second section of land) no law was in place to stop them. My aunt, for another instance, inherited her parent's homestead in law and deed, but then, that was in the mid fifties.
I'll send you the ISBN of the best book (IMHO) on the subject when I get back to Canada in January. I was a little loathe to make ANY comments without my research library close to hand, but I felt that a timely comment was best.
Please allow me to express my best wishes for a happy and prosperous new year. I have spent some good holiday time going through your blogs, and am impressed, entertained, and encouraged.

STAG, welcome. As to your assertion over women's rights on homesteading, I wonder why my grandmother wasn't allowed to homestead in Alberta in 1906 when told it was men only. She lived on a homstead with her husband, and would be allowed to inherit the property after it was proved.

In the United States the rights regarding homesteading are quite different.