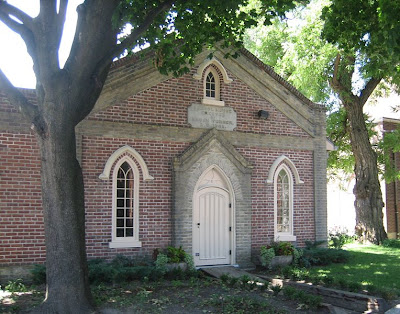 The Enoch Turner School was built in 1848 and located at 106 Trinity Street between King St. E. and Eastern Avenue in Toronto, Ontario. The building is now owned by the Ontario Heritage Trust.

Enoch Turner (1792-1866) was a native of Staffordshire, UK, who arrived in Toronto in the early 19th century. He established a brewery on Taddle Creek at Front and Parliament Streets. After a disastrous fire in 1832 he had to rebuild and was assisted by the York Circus with a benefit performance. A successful businessman, Turner contributed to an endowment fund to establish the University of Toronto as a non-denominational institutional. In 1848 he built the Enoch Turner Schoolhouse to provide basic education to the children of the poor Irish immigrants (from Cork, Ireland) in the neighbourhood surrounding his brewery, known as “Corktown”. This was the first free school in Toronto and is the oldest schoolhouse still standing in the city.

In 1849, the school opened with space for 240 pupils and Turner paid for its operation for three years.

An 1854 plan by John George Howard shows a brewery with a stone cellar, a malt kiln, a granary, ice house, stable, kitchen garden, "grapery," and paddock. The house measured 56' by 46' and had its own garden. The property included twelve separate lots.

By 1854 Enoch Turner is listed as a gentleman, and the brewer was Samuel Platt. In 1855, he sold his property to Consumers Gas, which used the property for gas storage tanks. 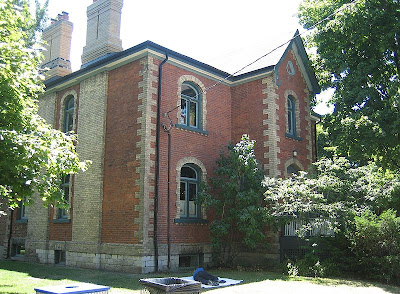 
The design of the one-story Gothic Revival style brick schoolhouse is attributed to architect Henry Bowyer Lane (1817-1878). In 1869, the building was expanded to the west with an addition designed by noted Toronto architectural firm Gundry and Langley. The addition is a particularly early work by Henry Langley, who opened his own practice that same year, following the death of Thomas Gundry.

Turner resided near his brewery until 1856, when he moved to 241 Sherbourne Street (just north of Dundas Street). He named this house "Allandale" after local land owner William Allan. "Allandale" is now part of the Sherbourne Lanes housing complex at 241-285 Sherbourne. The property is identified on the City of Toronto Inventory of Heritage Properties. 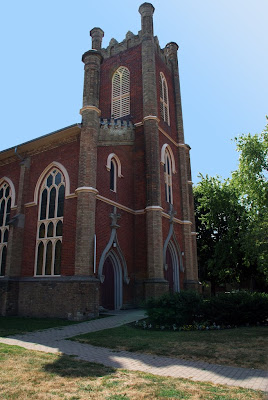 Turner remained active in the Corktown community, serving as a warden at Little Trinity Church. Although he married twice, Turner remained childless. According to historical descriptions, "in a period of grinding poverty he was regarded as a generous and compassionate man who loved children and animals. At the end of a hard day it is said that he would feed his horses beer".

Travis Erwin from Amarillo, Texas is the founder of My Town Monday. For other locations to visit please go to Travis' site here.
Posted by Barbara Martin at 20:53

Once again, things I did not know, and am quite happy to read about and see. Thanks again, Barbara.

This is a really interesting post, Barbara, and I appreciate Enoch Turner's philanthropy to his town. I wish more rich people nowadays emulated him.

I was just wondering, what happens to horses when they drink beer? Do they get colic?

My grandfather attended a little brick school similar to the Turner school and built in the same time frame in rural Indiana.

Chris, I now have a list of historical buildings discovered in and around Toronto, so should be good for several months of MTM posts. There are numerous rivers and creeks that have been cemented over in Toronto including a couple of cemetries. Taddle Creek mentioned in this post was one of those.

Teresa, there are philanthropists today and many prefer to remain anonymous.

I had a horse trainer that used to give the horse in my avatar photo Alpen Bitters in his bran mashes after he had been cooled out from a hard workout. Beer has been known to be added to mashes as well. It aids in the digestion. The amount has to be slowly introduced like all new feed to horses to prevent colic. Piggy liked his bi-weekly dose of bitters.

"in a period of grinding poverty he was regarded as a generous and compassionate man who loved children and animals. At the end of a hard day it is said that he would feed his horses beer".

I'm with Chris! You have once again opened something worthy, uplifting and engaging to us. Toronto is a great city, and you it's worthy scribe. Thank you, Barbara! Aloha

Cloudia, thank you for the accolades, but I do have to dig to find these gems in a city that has its dark areas. Any man who would give beer to his hardworking horses is a friend of mine.

Barbara, you do such wonderful and interesting posts. I love old architecture and to learn the history of how they came to be in existence is great.

Is it me or did schools used to look friendlier?

Interesting post. When I see some of the old buildings standing quietly beside giant skyscrapers in the downtown area, I think that I should research each one's history as you do. I'm sure some interesting stories would come up!

Reb, I am fortunate as Toronto has kept many of its old buildings and protected them under the Ontario Heritage Act.

Gary, beer is from a malt made from grain. Piggy would belch sometimes and then you could smell it down the barn aisle. Though he only got half a bottle in his mash.

Patti, it must be you or the design of this particular schoolhouse. The teachers used corporeal punishment then, if you recall. Well, even when I went to school with straps, pointers and yardsticks when the occasion suited. Hardly friendly. Though I remember bringing flowers or candy to the teachers in the early grades.

Bindu, perhaps if you're willing you might just do that and then join our group for a visit or two, I'd like that. I'm certain there are many buildings in India that have historical significance.

what a lovely old building.

That's wonderful how much he gave back to his local area, especially with donating to the university to be non-denominational. Very forward thinking (and socially risky) for back in those days.

Some horse are luckier than others.

beautiful schoolhouse. The ones built today (at least where I live) lack character...

Travis, they are indeed.

Monnik, there are schools in Ontario that resemble the high school used in the old TV series "Room 222", made out of brick with nice flowing lines like this one.

I love old buildings and all the better if you can put some meat on the bones!!

I hope the horses didn't get breathalyzed if they were stopped ...

Raph, I'm sure they didn't because who would think...