This music video was produced by Grade 10 students as a school project to support the Boreal Forest Conservation.

For those viewers who cannot view an embedded video see here.

Further information about the Woodland Caribou and other endangered species in Alberta can be found at this website. 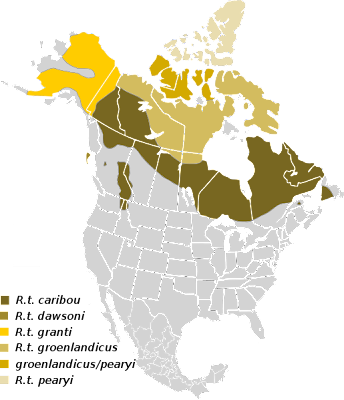 This diagram shows the approximate range of caribou subspecies in North-America with overlapping for contiguous range. Groenlandicus and pearyi mix on some arctic islands.

Barren-ground Caribou (R. tarandus groenlandicus), found in Nunavut and the Northwest Territories of Canada and in western Greenland.

Porcupine caribou or Grant's Caribou (R. tarandus granti) which are found in Alaska, the Yukon, and the Northwest Territories of Canada.

Peary Caribou (R. tarandus pearyi), found in the northern islands of the Nunavut and the Northwest Territories of Canada.

Woodland Caribou (R. tarandus caribou), or forest caribou, once found in the North American taiga (boreal forest) from Alaska to Newfoundland and Labrador and as far south as New England, Idaho, and Washington. Woodland Caribou have disappeared from most of their original southern range and are considered "threatened" where they remain, with the notable exception of the Migratory Woodland Caribou of northern Quebec and Labrador, Canada. The name of the Cariboo district of central British Columbia relates to their once-large numbers there, but they have almost vanished from that area in the last century. Herds are protected in Jasper National Park and the Caribou Mountains in Alberta.

Queen Charlotte Islands caribou (R. tarandus dawsoni) from Haida Gwaii (Queen Charlotte Islands) was believed to represent a distinct subspecies. It became extinct at the beginning of the 20th century. Recent DNA analysis from mitochrondrial DNA of the remains from those reindeer suggest, that the animals from Haida Gwaii were not genetically distinct from the Canadian mainland reindeer subspecies.

Only a 100 Woodland caribou left? How terrible! Here in South Africa there have been several 'success' stories with endangered species, particularly the cheetah and the African wild dogs. I really admire people who devote their lives to conservation.

I have just read 'Q and Q' by Indian novelist, Vikas Swarup. It has also been made into a movie: Slumdog millionaire. I enjoyed the book, very interesting structure. Witty, sad, unusual. (Don't I sound pretentious and academic!) I must look for the Dean Koontz novel. The cover is intriguing. Or rather read your review first!

I love the music video, Barbara. It is done very well. I also enjoyed the informative videos about caribou and old forests. Thanks for the information.

Valentines Day wishes to you Barbara :)

I don't think I'd ever heard of these particular types of caribou. Cool vids.

Barbara, those are good clips. Thank you for posting them.

Gary, I amended the first paragraph with punctuation to make the statement clear: Jasper National Park has only 100 individuals of woodland caribou. There are other subspecies of caribou and the post has been updated to reflect them.

Eleanor, the numbers are dwindling and it would be a shame to allow these fine animals to become extinct.

Now you have piqued my interest in 'Q and Q' and will go searching for it.

Teresa, in my search for videos to add to my posts sometimes I come across gems like these.

Sekhar, thank you very much.

Charles and Reb, nature and the environment needs to be taken care of.

How terrible, Barbara, that human activiti destroys the woodlands. Not only in Canada, but also in Borneo and other Asian countries. Where trees aren't cut, there are bush fires. The woods are not only essential for the lives of many animals, whose habitats are getting smaller and smaller, but they are the lungs of the earth, so we need them otherwise we get deserts and waste lands.

You never fail to educate me, Barbara! Yes, we need to watch after our animal cousins before it's too late. But then, we seem to be "doing ourselves in, too."

Wil, there are videos on YouTube that reveal what happens to forests when herbicides are used to test the products. Large swatches of vegetation are wiped out.

Donnetta, yes we are killing and maiming ourselves through the use of petroleum derivatives in such things as soap, detergent, cleansers, plastic containers, exhaust fumes from gasoline powered vehicles and machinery. The chemicals are absorbed through our skin. There was no diabetes or other serious illnesses until the invention of the light bulb.

Thank you for the Valentine wishes to ease my troubled heart.

eye opening!
Thank you for these professional posts, Dear. Aloha-

Cloudia, hopefully it will help others to think more deeply.

It is a sad fact, but human activities has had (still has?) a way of being for humans only. As you have written yourself, in Europe we use the term reindeer for all variants of caribou. In Norway it is domesticated by the Sami people (mainly in the North), but there is also large wild populations living on the mountain plateaus in for instance Southern Norway. There is a hunting season in the autumn, but the quotas are very often not filled.

BTW - I don't hunt. I lack the killer instinct.

PS Thank you for the nice comments - things are definitely going the right way.

I loved the Boreal Forest video very much, it's well done. I also hope that destruction of environment could be stopped and people would think more deeply.

I so love old woodland aesthetically, as well as for the wildlife, and am so sad that it diminishes.

As usual, very interesting. And I always wondered about the difference between caribou and reindeer. BTW, my car photos helped. ;) Go see my MTM post.

An excellent and inforantive post Barbara. Thanks for sharing.