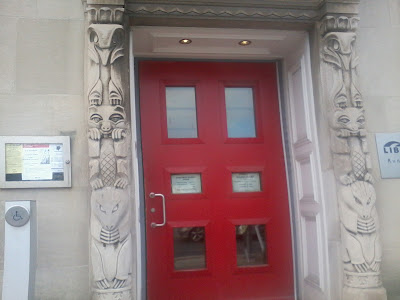 Early in July I paused outside the Runnymede Public Library, at Bloor St West and Glendonwynne, where the art deco around the front door caught my eye. Inside one of the librarians was kind enough to assist me in locating information about the architect, one, John M. Lyle.

Mr. Lyle was born in Ireland in 1872, came to Canada at an early age. He was the first architect to use Canadian style, designing the high pitched French Canadian type of roof tiled with the ordinary small black slats used in France. The walls of the library were constructed from the local Credit Valley limestone, grey stone with hints of yellow and red in its texture. Construction began in 1929 and was completed in 1930.

The art deco around the front door was done in a First Nations totem motif: the raven, the beaver and the bear on the bottom. 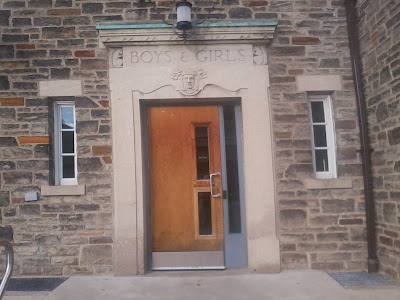 On the west side of the library is a door that once led into the children’s portion of the library where special spaces (club rooms) were allocated for their activities.

A few of Mr. Lyle’s other creative works in Toronto are the Royal Alexandra Theatre and Union Station which share the similar style of the Runnymede Public Library.

Photo Credit: B E Martin All Rights Reserved.
Posted by Barbara Martin at 20:46

This is a great post, Barbara. I have missed your interesting introductions to sights and sites in Canada.

Libraries as such are arguably the most important institutions a society can have. This looks like fine and well designed example.

I like art deco! This door is very beautifully done.
Thanks for your visit and comment.
Wil, ABCW Team

I love the details! What a great librarian too!