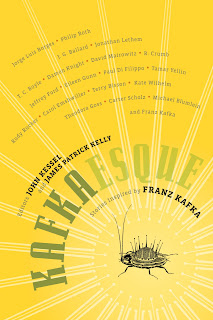 “THE TOURIST SHOPS OF PRAGUE SELL DOZENS OF ITEMS COMMEMORATING FRANZ KAFKA. You can drink a latte in the Café Kafka, add sugar to it from a packet with Kafka’s face on it, and then light your cigarette from a box of Kafka matches.


“Franz Kafka died in obscurity in 1936, publishing only a handful of bizarre stories in little known literary magazines. Yet today he persists in our collective imaginations. Even those who have never read any of Kafka’s fiction describe their tribulations with the Department of Motor Vehicles as “Kafkaesque” How did this happen?

“Kafkaesque explores the fiction of generations of authors inspired by Kafka’s work. These dystopic, comedic, and ironic tales include T.C. Boyle’s roadside garage that is a never ending trial, Philip Roth’s alternate history in which Kafka immigrates to America to date his aunt, Jorge Luis Borges’ labyrinthine public lottery that redefines reality, Carol Ernshwiller’s testimony by the first female to earn the right to call herself a “man,” and Paul Di Filippo’s unfamiliar Kafka—journalist by day, costumed crime fighter by night.

“Also included is Kafka’s classic story “The Hunger Artist,” appearing both in a brand-new translation and in an illustrated version by legendary cartoonist R. Crumb (Fritz the Cat). Additionally, each author discusses Kafka’s writing, its relevance, its personal influence, and Kafka’s enduring legacy.”

The stories listed below were some of the most bizarre but ingenious I have ever read. They work on repetitive themes Franz Kafka incorporated in his own work.

A Hunger Artist by Franz Kafka

The title introduces the topic of the unfolding story of a man on exhibition, fasting. Initially I wondered where it was going, and soon was mesmerized by the words and the story.


The Drowned Giant by J.G. Ballard

A rendition of Gulliver’s Travels with macabre twists.


The Cockroach Hat by Terry Bisson

Love, death and misdirection as told in an alternate reality by a cockroach.

A clothes designer discovers an eight-foot wasp in his salon.


The Lottery in Babylon by Jorge Luis Borges

As was in Babylon of old with wanton and unusual tastes, the lottery fulfilled most of the buyers’ dreams with its prizes.

An Audi owner joins three bedraggled car owners living in a garage while waiting for repairs that may never come.

A journalist turns crime fighter by night in Kafaesque style.

Report to the Men’s Club by Carol Emshwiller

A feminine take on living in a patriarchal society.

An escape story with a twist, of a fantasy/science fiction writer implementing Kafka elements.

The Rapid Advance of Sorrow by Theodora Goss

A surreal look at communism in eastern Europe.

Bioengineering has its disadvantages when applying insect genes to facilitate organizational abilities.

The Handler by Damon Knight

A story difficult to interpret except to stay it has the aspect of a Trojan horse.

A parody on “It’s A Wonderful Life”.

A Hunger Artist by David Mairowitz and Robert Crumb

A pictorial version of the story by Franz Kafka.

“I Always Wanted You to Admire My Fasting” or, Looking at Kafka by Philip Roth

Humourous reminiscences of a boy’s Hebrew-school teacher being invited to dinner.

Not my type of story. Someone else may find it entertaining.

The Amount to Carry by Carter Scholz

Kafka in Bronteland by Tamar Yellin

In reflection of her Jewish upbringing, a Yorkshire woman encounters Kafka on the moors.


JOHN KESSEL and JAMES PATRICK KELLY are the award winning co-editors of canon-defining anthologies, including Feeling Very Strange, The Slipstream Anthology, Rewired: The Post-Cyberpunk Anthology, and The Secret History of Science Fiction.


The review copy was provided by Charlene Brusso, with many thanks.

These days one only has to read certain news-stories to realize that Kafka's society is just round the corner.

I guess Kafka is too bizarre for me. I could never really get into any of his work.

The current issue of The Atlantic has an article, Is Franz Kafka Overrated? http://www.theatlantic.com/magazine/archive/2013/07/is-franz-kafka-overrated/309373/. I don't believe so.

RuneE, history does tend to repeat itself.

Charles, Kafka's writing has a definite psychological twist to it.

David, I agree with you.