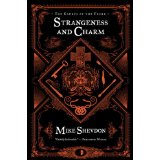 chapters.indigo.ca
Posted by Barbara Martin at 19:24

Has the urban fantasy genre started to flag at all? It's been going strong a pretty long while.

Charles, it appears to be holding its own as the publishers I read continue to produce the urban fantasy.