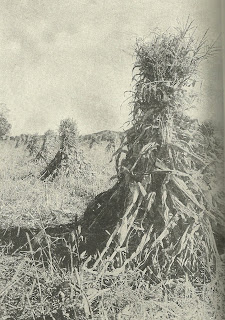 Good for your mom. I recall having stooks in a field when I was very young. Dried wheat, I think, but it was a very long time ago.
Brought back memories. Thanks.

I never did this but I've seen a pic of one of our fields with stooks standing.

Leah, I remember in the mid to late 1970s when the large round bales became all the rage with farmers, though they still used the square baler in two sizes. The larger square bale of timothy alfalfa mix weighed about 80+ pounds while the smaller one was more manageable, at least for me. The large square bales would allow generous sized flakes to feed horses with.

I recall one of my uncles putting hay up in tall stacks that had to be covered with tarp.

Charles, I remember seeing fields of stooks when very young like Leah. Cousins in central Alberta put part of their crop up that way before they could afford a baler.

A nice little story from the old days. I notice that you use(d) different techniques from us when drying hay (which is hardly done any more).

I too remember seeing a few stooks in my youth, but mostly remember the square bales. I also remember one summer/fall day, helping one of the country kids we went to school with pitch bales. I don't know what size, but man, were they heavy. These days you hardly ever see square bales. I suppose a one ton round bale is a bit more efficient.

RuneE, I'm certain most farmers are grateful for their machines that make their work faster and easier. Though there are Amish who live near Kitchener, Ontario and north of there who still farm the 'old' way. It's quite the sight to see from the highway.

Reb, I still see the square bales when I go out with a friend to see her horse. There they have the 80 lb square bales of hay and straw bales too. Sometimes a look in the past brings up fond memories.

Have never heard the word stooks before but my wife's mother told stories of harvests and the back breaking work involved. She ran a farm on her own when her husband was killed.

Nowadays so much is automatic with bundles stored within black plastic material. The 'romance' has gone.

Thanks for the memories.

A great insight into your mother. So glad she didn't tell and her father didn't ask!!

Mike, running a farm on your own can be challenging. I did for five years with a rustic bungalow, a hand pump to get water and a cast iron wood stove, though I did have electricity which was a bonus in the winter.

Pam, my mother was quite determined in all that she did, and thankfully some of that rubbed off on me.