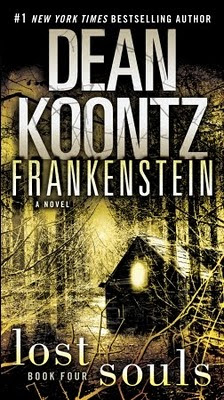 “The war against humanity has begun. Victor Leben, once Frankenstein, has not only seen the future—he’s ready to populate it. Using stem cells, “organic” silicon circuitry, and nanotechnology, he will engender a race of superhumans—the perfect melding of flesh and machine. With a powerful, enigmatic backer eager to see his dream come to fruition and a secret location where the enemies of progress can’t find him, Victor is certain that this time, nothing and no one can stop him.

“It is up to five people to prove him wrong. In their hands rests nothing less than the survival of the human race.

“They are drawn together in different ways, by omens sinister and wondrous, to the same shattering conclusion: Two years after they saw him die, the man they knew as Victor Helios lives on. Detectives Carson O’Connor and Michael Maddison; Victor’s engineered wife, Erika 5, and her companion Jocko; and the original Victor’s first creation, the tormented Deucalion, have all arrived at a small Montana town where their old alliance will be renewed and tested—by forces from within and without, and where the dangers they face will eclipse any they have yet encountered. Yet in the midst of their peril, love will blossom, and joy, and they will discover sources of strength and perseverance they could not have imagined.

“They will need all these resources, and more. For a momumental battle is about to commence that will require all their ingenuity and courage, as it defines what we are to be…and if we are to be at all.”


This is a very creepy story with tension and suspense deepening as the story progresses. By the time I got to the end I was hooked into a great story despite it being the fourth in a series and not having read any of the previous books. There was sufficient explanation of the characters’ roles from the previous books to keep me interested. A fault I found was an over explanation of the character, the cloned Victor, near the ending. Though I must say, Victor, is definitely a monster to be avoided. The rather abrupt ending just as the action was well in high gear was a bit of a disappointment; and makes this book not a stand alone.

Although this book is listed in the genre of general fiction it encompasses science fiction, adventure, police procedural, romance, and rather heavy on the horror. All of these components make for excellent fiction. There are also elements of dry humour provided by the PIs and secret FBI agents. The character, Deucalion. 200 years old, has special talents like the ability to move through walls and teleport from location to location.

Throughout there are subliminal messages which the reader can obtain from between the lines. Mr. Koontz has a fine grasp of what makes America tick. All in all, an excellent read and one I recommend. I look forward to the next installment.

The review copy was kindly provided by Cassandra Sadek.

Also available in paperback and ebook.

chapters.indigo.ca
Posted by Barbara Martin at 17:23

I have the first 2 in this series but haven't read them yet.

RuneE, Stephen Hawking has reality embedded in his theories. His comment on intergalactic travellers taking the energy from suns of other solar systems and plundering our planets' resources is certainly food for thought for any creative writer.

Dean Koontz is a terrifying writer. I prefer his fiction to Stephen King's. I'm gonna check out this book today by downloading a free sample to me e-reader.