Girl in a Blue Dress by Gaynor Arnold (Book Review) 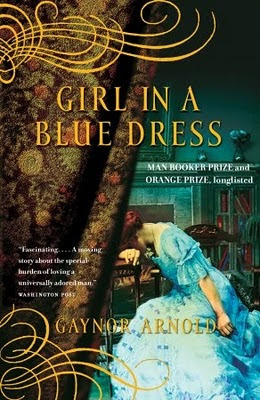 “Alfred Gibson's funeral is taking place, and Dorothea, his wife of twenty years, has not been invited. The Great Man's will favours his children and a clandestine mistress over the woman he sent away when their youngest child was still an infant. Dorothea initially accepts her exclusion, but then she begins to examine her own life more closely. Her recollections uncover deviousness and the frighteningly hypnotic power of the genius she married, but also raise questions about her own complicity - questions that finally compel her to face her grown-up children and the two women she has long felt stole her husband.”

Longlisted for both the Man Booker and Orange Prizes, Gaynor Arnold’s debut of her fictional account of the marriage and life of Charles Dickens and his wife Catherine will appeal to those who like reading about the Victorian era.

A long time fan of the books of Charles Dickens I thought this book would be a nice introduction into what his life was like during his life of marriage and writing. “Girl in a Blue Dress” captivated me throughout the telling of Alfred Gibson’s life, detailing with vivid description of his quirks and antics to acquire the woman he desired to marry, which carried through to his writing and future success in literature, theatre and speaking engagements; and raising children. All the foregoing as told through the viewpoint of his estranged wife, Dorothea Gibson.

It brings to the forefront the difficulties women had during the Victorian era, their limitation of choice once they became married. Dorothea, or Dodo, as she is called by her family and Alfred, initially appreciates being with her sweetheart husband despite their meager lifestyle. When Alfred’s writing career takes off with great success, complete with social functions and lavish dinners held at his new house, Dodo begins to find herself overwhelmed with producing children on a yearly basis and a lack of private time with her husband. After being wife for twenty years she is ousted from the family home and placed into private lodgings. Scandal ensues with suspicions directed at Dodo’s sister, Sissy, who came to take care of the children and remained in the household; and at a young actress, Wilhelma Ricketts, whom Alfred takes as a mistress, and whom ends up with a share of his estate.

Ms Arnold describes in wonderful detailed characterizations of how everyone has an impact on each other complete with consequences of actions. It is a thrilling yet sad story, even tragic of how marriage and circumstances of those involved have far reaching effects. A mismatched marriage from the beginning: Dodo from a prosperous family with parents who disapproved of her suitor, to Alfred, an overambitious man working toward success to escape a childhood of poverty through his own parents’ mismanagement of money.

As to the true life story of Charles Dickens I am ignorant, except for his parents’ stint in debtors’ prison, and one of his sons joining the North-West Mounted Police after a naval career. However; “Girl in a Blue Dress” has raised a curiosity in me to look farther afield for more information.

Amazon.com
Posted by Barbara Martin at 16:37

I had not heard of this. Sounds intersting.

I read "Dickens of London" by Wolf Mankowitz. And that's the same sad story. It's terrible that there are still places where women are treated as second even third rate creatures. There is still a lot to be done. Great post, Barbara!

And that's a fabulous cover.

Charles, the Victorian era holds a special fascination for me.

Wil, women are more independent than they were and have more avenues available. However, Charles Dickens did work very diligently towards making the masses aware of those living in poverty and provided ideas and methods to alleviate those conditions.

David, Ms Arnold's writing style is quite eloquent that conveys the mood of the times.

What a fascinating review, Barbara. I'm going to get a copy and read it. Thank you so much for the recommendation.

Editor, welcome and I'm pleased to hear you liked the review.