The Man From Beijing by Henning Mankell (Book Review) 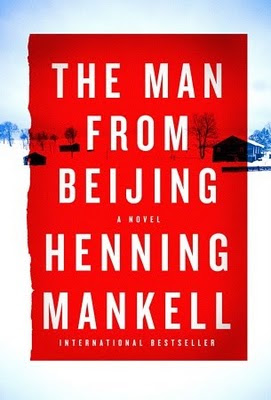 "From the internationally acclaimed author of the Kurt Wallander mysteries comes an extraordinary stand-alone novel--both a mystery and a sweeping drama--that traces the legacy of the nineteenth-century slave trade between China and America.

January 2006. In the small Swedish hamlet of Hesjövallen, a horrific scene is discovered: nineteen people have been tortured and massacred and the only clue is a red silk ribbon found at the scene. Judge Birgitta Roslin has a particular reason to be shocked by the crime: her mother's adoptive parents, the Andréns, are among the victims. Investigating further, she learns that an Andrén family living in Nevada has also been murdered. Travelling to Hesjövallen, she finds a diary, kept by a gangmaster on the railway built across America in the 1860s, full of vivid descriptions of the brutality with which the Chinese and other slave workers were treated. She discovers that the red silk ribbon found at the crime scene came from a local Chinese restaurant, and she learns that a Chinese man, a stranger to the town, was staying at a local boarding house at the time of the atrocity. The police insist that only a lunatic could have committed such a horrific crime, but Birgitta suspects that there is much more to it, and she is determined to uncover the truth. Her search takes her from Sweden to Beijing and back, but Mankell's narrative also takes us 150 years into the past: to China and America when the hatred that fuelled the massacre was born, a hatred transformed and complicated over time and that will catch up to Birgitta as she draws ever closer to discovering who is behind the Hesjövallen murders."


This book is an excellent political thriller and detective mystery which unfolds with the discovery of a dead man missing a leg in the snow outside a rural Swedish village followed by eighteen other bodies of elderly residents and a boy in the houses. The only clues are a red ribbon and a 19th-century diary found at the scene.

Mr. Mankell provides just enough information to keep the reader going without losing interest. The story moves from the present into the past mid-nineteenth century to Guangzhou, then to Nevada, returning to 21st century Beijing to Zimbabwe and Mozambique and back to Sweden while using international political issues as a background. The underlying motives are dealt with through a variety of characters to provide political and social explanations of China’s involvement with foreign countries, as well as the reason behind the murders.

Judge Birgitta Roslin begins her own inquiry into the murders when she discovers that her mother’s foster parents are among those found dead. Off work for high blood pressure she studies the journals found in the foster parents’ home. She finds a link to the red ribbon and follows it to a local hotel where Birgitta uncovers another clue. The suspense builds until the naïve Birgitta finally realizes that the killer is after her.

I would recommend this book for any avid mystery crime reader as it does provide good elements for a thriller.

Internationally acclaimed author HENNING MANKELL has written nine Kurt Wallander mysteries, which have been published in thirty-three countries and consistently top the bestseller lists in Europe, receiving major literary prizes (including the UK's Golden Dagger for Sidetracked). He has also published many other novels for children, teens, and adults. In addition, he is one of Sweden's most popular dramatists. Born in 1948, Mankell grew up in the Swedish village Sveg. He now divides his time between Sweden and Maputo, Mozambique, where he works as a director at Teatro Avenida. He has spent many years in Africa, where a number of his novels are set.

Amazon.co.uk
Posted by Barbara Martin at 00:07

It does sound really good! Good to read you again!

You do the best book reviews, Barbara! I've got to read this- it sounds great. Mystery/suspense is my favorite bench.

You have met Sweden's most famous contribution to crime :-)

A great book review! I saw many Wallander mysteries on TV. Very thrilling.
Have a wonderful and sunny Easter!

thank you very much for your explanations and articles provided