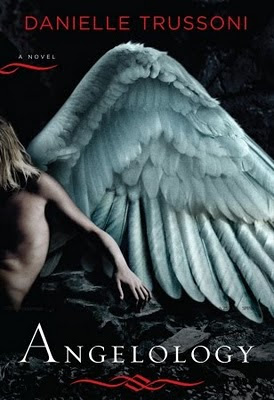 From the publisher, inside book flap:


“There were giants in the earth in those days; and also after that, when the sons of God came in unto the daughters of men, and they bare children onto them.”
Genesis 6:4

"Sister Evangeline was just a young girl when her father entrusted her to the Franciscan Sisters of Perpetual Adoration in upstate New York. Now, at twenty-three, her discovery of a 1943 correspondence between the late mother superior of St. Rose Convent and the famous philanthropist Abigail Rockefeller plunges her into a secret history that stretches back a thousand years: an ancient conflict between the Society of Angelogists and the monstrously beautiful descendants of angels and humans, the Nephilim.

"For the secrets the Rockefellers guard are desperately coveted by these once powerful creatures who stopped at nothing to perpetuate war and subvert the good in humanity. Almost since human civilization began, these uncommonly tall fair figures moved undetected throughout the world, gaining great power and tracked in stealth by generations of angel scholars—the angelogists—who have devoted their lives to stopping them. This mission is steeped in a reality shadowed by the divine supernatural. It haunts every corridor of Evangeline’s Hudson River abbey, pierces the innocent world of an art historian’s research, and casts architectural treasures in Paris and New York in an astonishing new light. All the while, deep in a Bulgarian mountain cavern, the Nephilim’s angelic forefathers illuminate the stalactite bars of their prison with a radiance of an altogether different sort—a perpetual glow that is as deadly as it is irresistible.

"As Evangeline learns how these realms connect to the correspondence she’s found, she comes into knowledge of the role she herself is destined to play in this ancient clash reignited—and of how her Parisian grandmother, one of the great angelogists, intends to prevent catastrophic defeat on the eve of the new millennium.”


I loved reading this book, and once begun was unable to put it down. For those looking for an engaging thriller, this is the one to read.

The author combined historical detail with a variety of interesting characters, mixing it with biblical stories of the fallen angels, mythology, the supernatural and a treasure hunt, to produce a wonderful book. The story starts out slowly with a great attention to detail of Evangeline’s life as a nun in a convent along with snatches of her childhood.

A bohemian art historian is introduced early, Paul Verlaine, doing research for the cruel and handsome villain, Percival Grigori. Verlaine is described as dressed in a white corduroy jacket and favorite Snoopy socks with a bad track record on first dates and job interviews. Verlaine has been hired to learn whether Mrs. Rockefeller and the convent’s abbess had exchanged correspondence. Grigori, an impatient, arrogant creature, presses Verlaine for the research material from the convent.

Percival Grigori belongs to a long line of Nephilim described as “beautiful, iridescent monsters” with golden skins and large white wings. The Nephilim, once powerful, are becoming sick and losing their angel powers due to too much interbreeding with humans. Grigori is searching for the golden lyre that Orpheus gave to the fallen angels imprisoned in the caverns in Bulgaria hoping to heal his decaying wings.

As bits of Evangeline’s childhood are slowly revealed, an overheard poignant comment from one of the Nephilim remains etched upon her mind: “Angel and devil….One is but a shade of the other.”

Woven within Evangeline’s story via flashbacks is her grandmother’s involvement with the Angelological Academy, providing an in-depth look at how the society managed its affairs and how some of the Nephilim managed to survive.

The detailed description within tends to slow the pace of the story in places but quickens when the chase is on at the two-third mark in the book. I enjoyed the extensive descriptive explanations as the clues were revealed one by one throughout the story. Ms Trussoni’s use of words produces stellar imagery for the reader to transcend place and time, whether it is in a convent, cave or through the eyes of a little girl or a prideful Nephilim.

I suspect by the number of loose ends left dangling at the end of the book that there is a sequel in the works. However, the ending should leave a satisfactory feel to the reader although I found it left an uncomfortable gap with the relationship between Evangeline and Verlaine with a feeling of being rushed into a new set of circumstances.

I'm looking forward to the sequel.

For more information about the book and the characters within visit Angelogy.com.

My thanks to Julie Forrest for providing the book for my review.
Posted by Barbara Martin at 22:59

I've heard good things about this book all around. Gotta check it out.

I heard an interview recently with Ms. Trussoni... fascinating. Sounds like an intriguing book.

What a striking cover, too. It sounds great.