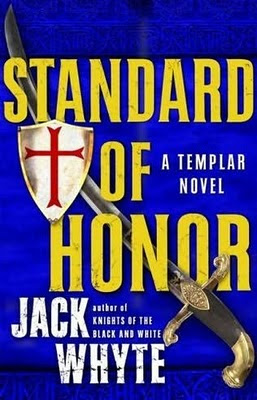 “As the Second Crusade crashes into ruin with the defeat of the Christian armies by the Muslim Sultan, Saladin, a Scots Templar knight, Alexander Sinclair, is taken captive by one of Saladin’s captains. Sinclair learns from his captor that Saladin is determined to be merciless in exterminating the Templar knights, believing them to be the single greatest threat to Islam, and he begins to fear for his brothers in arms.

“Meanwhile, Sinclair’s youngest cousin, André, a fugitive in France, is offered a chance to redeem himself of false charges, provided that he and his father, a former master-at-arms, agree to join the Third Crusade in the army of the new King, Richard the Lionheart. But the new king, whose duplicitous ways and fierce temper lead to a shocking and vicious betrayal of one of his own best men, proves to be a far bigger threat to the St. Clair family than anything they will face in the war.”

The Standard of Honor is the second book in a trilogy about the Templar Knights, following “Knights of the Black and White” which introduced the beginnings of their Order, the reasons behind the founding of them. This book deals with the inner workings of the organization and how man perceives the aspect of honor.

Jack Whyte has prepared this entertaining book with well researched detail on the Third Crusade and the Order of the Temple. I loved Mr. Whyte’s full descriptions of the political intrigue of the time combined with the battles and skirmishes including excellent explanations on certain methods of warfare and weapons. He took the time to explain the political intrigue between the factions of the orthodox and catholic sections of Christianity, and Saladin along with the Muslims.

The scope of the story was quite large with the development of plot between the two cousins: Alex Sinclair’s fate in the desert after the Battle of Hattin and Andre St. Clair’s training in the Brotherhood of the Sion within the Order of the Temple; and the various battles in Cyprus and Sicily, and the different relationships between family, king, country, Order and Brotherhood.

Other reviews have mentioned an abrupt ending to the story; however, I found 50 pages before the end was reached that Mr. Whyte had begun to wind the story down. The ending came at an appropriate placement with the characters with closure of the questions presented before.

If you want an adventure story with detailed historical events then this book will do the job in an excellent fashion.

I am looking forward to reading the third book in this trilogy, Order in Chaos, which is certain to entertain in true Jack Whyte style.

Standard of Honor was a book that I purchased.

Amazon.co.uk
Posted by Barbara Martin at 21:23

850 pages! wow, that's a tome for sure. I do enjoy good historical fiction, though, and this is set in a time period I generally enjoy.

I doubt I could read such a weighty book anymore!

I enjoy reading historic novels, Even if I don't agree with the crusades, I must acknowledge that they have inspired many great people to create masterpieces. I think of Handel's Rinaldo and the many books written about those events. Thanks for your post, Barbara! And thanks for your visit and comment! Have a wonderful week.

I loved The Knights of Black and White. I will have to look for this one. Maybe over spring break...

is jack not a canuck, now?

Tony, Jack Whyte may be by now after emigrating from Scotland many years ago.

I like a quick read these days. But, you never know, I could get hooked! Love the historical facts woven in and throughout. Hope you have a fabulous weekend. D

Barbara, you are always such a meticulous, perceptive reviewer that everytime I read one of your evaluations I just have to buy the book!