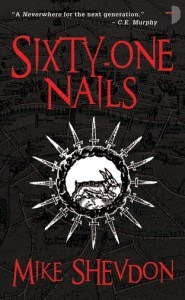 Sixty-One Nails, a debut novel, is the first book of The Courts of Feyre series. The title and cover photo, integral to the plot, are revealed through the telling of the story while providing another slant at urban fantasies.

A life which was hidden to Niall Peterson suddenly becomes opened to him when he has a near-death experience after witnessing an accident on the London Underground enroute to work. A woman named Blackbird rescues him and begins Niall’s introduction into the world of the Fayree by giving him the moniker of “Rabbit”. Blackbird shows Niall a new road to self-discovery of his abilities. In the beginning Niall is frustrated with his new found abilities, learning to cope with them as they appear and how to apply them to the pure blood fey, who are executing all the half-blood mongrels they find. The pure bloods have a section calling themselves The Untainted, the darkest of the Seven Courts, who have made a play for power intending to enslave the other Fayre and humans.

Niall has to find a way to correct the wrong in an old English ceremony which has been performed annually since 1211 to defeat the Untained. There are excellent descriptions of locations and plenty of dastardly villains to keep any reader happy.

All characters including those who are fey are well developed with strengths and weaknesses and the story moves along steadily with excellent attention to detail of location with some historical details provided.

Mr. Shevdon used a piece of English history: the Quit Rents Ceremony that occurs every year. He provided an explanation of the background of this history and how it relates to the plotline. I liked his descriptions of the London locations and felt as if I had returned there in person seeing the sights again.

Once I started this book I could barely put it down, wanting to know how certain threats would be dealt with and solved. There are no weak spots, and the action kept moving at a good pace. I really enjoyed reading this book. I recommend this book to anyone wanting to delve into a different look at urban fantasy.

I look forward to reading the second book in this series, “The Road to Bedlam”, available in the UK July 2010.

Amazon.com
Posted by Barbara Martin at 21:22

sounds good to me, thx barbara...

Sounds like it might be my cuppa, Barbara. I generally prefer traditional heroic fantasy but this sounds interesting.

Gotta say though, if I could somehow guarantee I'd live long enough, I'd prefer waiting 'til the last of these multi-volume epics is released before starting to read them. By the time the next is released, I often need to re-read the previous one to refresh my memory.

Then when the third book comes out...and fourth...well - you get my drift. ;)

Frank, that's how I felt with the Robert Jordon series "Wheel of Time". Though perhaps the publisher may print this fairy series back to back.

Teresa, the writing style is very smooth while covering detailed information to progress the story along.