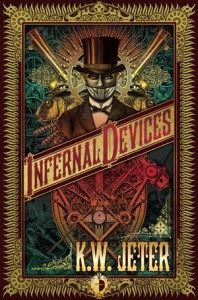 This was my first real foray into Steampunk Fantasy set in Victorian times. The description of historic background and characters provided an enticing read.

Mr. Dower, Jr., inherits his father’s trade, that of purveyor, construction and repairman of timepieces, clockwork and scientific devices.

Unfortunately, the son has no knack for the more complicated designs his father invented, nor the maintenance of them. His father’s old assistant, Creff, continues on in his former place as manservant as well as aiding in repairs.

When Mr. Dower is commissioned to repair one of his later father’s designs, a regulator, by a man described as the “Ethiope”, he has explained he is not capable of the repairs requested. Yet the foreigner persuades Mr. Dower to try, and thus, provides a gold crown with the likeness of Saint Monkfish rather than that of Queen Victoria. Once Dower realizes he is in possession of this odd coin, he decides to search for the person who made it. The search leads from revelation to the next while providing an entertaining mystery.

An assortment of supporting characters add colour to the tapestry of the unfolding mystery:

A terrier named Abel steals part of the story;

Graeme Scape, procurer of clockwork pieces, a natty dresser who wears blue spectacles which he never removes, exhibits artifacts on the road;

Lord Bendray, scientist in his spare time, requires the regulator for one of his experiments and will go to any length to obtain it;

The novel picks up speed once the Paganinicon makes his appearance, adding suspense and adventure that escalates to the end. All in all, a rather satisfying read that provided a few chuckles and many exciting moments of just what the author had up his sleeve. This was a book that was hard to put down.


Morlock Night is the second novel in the combindation package put out by Angry Robot Books with Infernal Devices. This review will follow below.
The review copy was provided by Lee Harris. 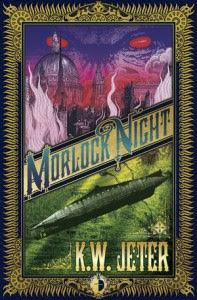 This novel is also of the Fantasy Steampunk genre.

It is 1892 in Victorian England. Edwin Hocket has been to an unusual meeting in London where time travel to the distant future was discussed. Hocker finds it to be rather entertaining to learn mankind has evolved into two races: those who live underground and those living above ground, known as “Morlocks” in perpetual war.

Enroute home, Hocker discovers a man accompanying him down the street. They discuss the evenings’ discourse with Hocker no more convinced that a Time Machine, Time Travel and Morlocks actually exist. After smoking his companions’ exotic pipe tobacco, Hocker, discovers himself in the midst of sniper fire, rescued by a woman dressed as a man carrying a rifle and pistol, both of unknown manufacture.

The story moves on in a manner that reminded me of the movie “Matrix”, with each new revelation more fanciful than the last. Historical figures from the past make their appearance which I found to be far-fetched. Up to this point the story was rather good and then it didn’t appeal to me at this section of the story. Perhaps other readers might find this different.

The advanced review copy was provided by Lee Harris.

chapters.indigo.ca
Posted by Barbara Martin at 12:27

Great cover. I've read some of Jeter's short stories and enjoyed them.

I'm going to have to read these. Thanks for the heads up Barbara.