The Glass of Time by Michael Cox (Book Review) 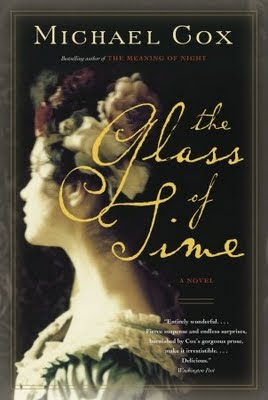 It is 1876, twenty-two years after the murder of the poet Phoebus Daunt by his former friend Edward Glyver. Esperanza Gorst, a nineteen-year-old orphan, arrives from Paris to become lady’s maid to the 26th Baroness Tansor, who became mistress of the great country house of Evenwood by helping Daunt deny Glyver his rightful inheritance. But Esperanza is no ordinary servant and as she turns from lady’s maid to master manipulator, "The Glass of Time" pulls readers into a sinister web of intrigue, murder, and ruinous betrayal.


This Victorian mystery is a sequel to The Meaning of Night that is narrated by an intelligent young woman, Esperanza Alice Gorst. Although an orphan and never knowing her parents, Esperanza was raised by a guardian, Madame de l’Orme, in France and tutored by Basil Thornbaugh. She is sent to England on arrangements by her guardian to become a lady’s maid for the 25th Baroness Tansor, formerly Miss Emily Carteret, widow at the magnificent estate of Evenwood. Esperanza’s “Great Task” is to ingratiate herself with Lady Tansor while waiting to learn the reason behind her secret mission which her guardian has promised in three letters to be sent before year end. Encouraged to keep a journal, Esperanza carefully records all of her opinions and observations on Emily Tansor’s life, two sons, friends, acquaintances and household staff.

Once Experanza learned what her “Great Task” was I thought the ending would be typical for the situation, but the author provided some unusual twists and turns at the very end.

The historical detail of the Victorian era is superbly done combined with rich character development and writing style that the author uses to draw the reader into his world. The clues are revealed gradually that points to the drama of the narrative filled with conspiracies, villains, murders, betrayals, romance, fate, and hidden documents. Michael Cox has crafted a page turner filled with dark secrets, people with questionable pasts, and interesting sub-characters such as the hansom-cab driver, Solomon Pilgrim, and the solicitor, Armitrage Vyse. All perfect elements for escaping into an excellent book.

It is quite unfortunate that Michael Cox passed away in March 2009 as I would have eagerly awaited any of his future novels.

Amazon.co.uk
Posted by Barbara Martin at 14:36

Ever since reading some of the Sebastian St. Cyr mysteries I've intended to do some more historical. I'll keep this one in mind.

Your reviews of beloved books always make me want to hurry to the next bookstore! :-)

It is always such a sad moment when we realize a favorite writer's voice is no more.

I was thinking of you as I walked by the Lipizzan Stables. I stopped and took a portrait, just for you! ;-)

Charles, this has many intriguing sections.

Merisi, this series is perfect to be reread on cool autumn days and nights. There are a few authors that I return to regularly, and this set will be one of them.

This sounds like a fascinating book, and I had never heard of it. Thanks for the review.

This sounds like an excellent read. What a pity there won't be more.

Shauna, I loved it for the historical aspects and location.

Leigh, at least I can savour the story in rereads.

Aubrie, welcome and enjoy your visits.

Nice post you got here. I'd like to read a bit more concerning this matter. Thnx for giving that material.
Joan Stepsen
Technology gadgets