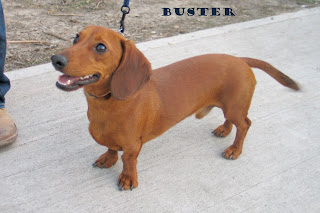 Best friend? That’s a dog. Currently, I don’t have a dog, although I have had several in the past. So in lieu of showing photos of the dogs I have owned, this particular dog is Buster. He’s a Standard Dachshund, owned by a friend. A nicely put together dog: with a well shaped head, good bone in his legs and a square stance. How can you tell I used to show dogs?

Dachshunds come in two sizes: standard and miniature; three coat lengths: long, short and wire; and colours: black and tan, red, and dapple. They also come in other colours (when I was showing dogs they were not allowed in the ring).

Dachshunds were bred to hunt rabbits, foxes and badgers in Germany. A dog has to be tough and tenacious to go after a badger. The only other dog bred to go after badgers is the Skye Terrier from Scotland.

During my dog show career, the breeds of dogs I exhibited were: a slew of Doberman Pinschers in conformation and obedience trials; an Akita and a Saint Bernard. One of the techniques used in showing a dog off to a judge was to use some bait: often liver, and more likely to be beef than pork. Dogs love liver to distraction. Their attention to you becomes riveted as their eyes and nose zero in on those wee chunks you popped into your mouth to hold in your cheek while you keep one eye on what the judge is doing and the other eye on the dog to make sure its standing where you put it.

When I was in the dog show ring I used beef liver, and at one show, I had a breeder's Akita bitch in a 9-12 month class. I ran out of liver, was given a small handful by another handler. Out of habit I put it into my mouth. Gag! Blech! It was pork liver. And the dog was eyeing me up ... gee if I had it in my mouth it must be really good!!!! She was a good dog, stood square, kept her tail curled over her back and pricked her ears at me. Akita's ears naturally stand up, but when they are puppies and still growing, one may not stand erect and flop over instead. We took the breed, which is really great with a senior puppy and moved on up to do a Group class. Every dog who wins a breed class automatically moves up into a Group class to be judged best of Group. Then all the Best of Groups are judged together for Best of Show. We only got to Group and didn't move on up. Very rare for a senior puppy in any breed to go up against older dogs who are usually of champion status.

My ex and I had a miniature dachsund named Silky, a black and tan. Very sweet and enjoyable dog.

Charles: Very nice dogs, indeed. There are several dachshunds in the apartment complex I live in: above me, Buffy, a black and tan miniature; and two other miniatures down the hall, Zeus, a dapple, and Bridget, another black and tan. Nice happy dogs who love to pick up sticks and chew them to death. Funny how you learn all the dog names and not the owners.