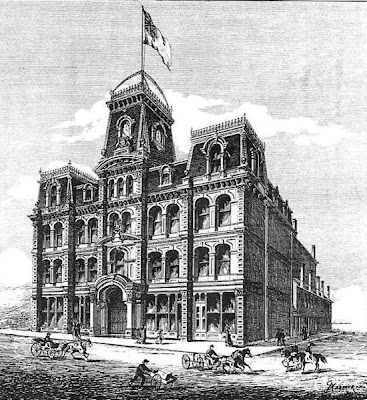 In 1874 on Adelaide Street West, west of Yonge Street, the Grand Opera House opened in Toronto, Ontario. Designed in the Second Empire-style with 1,750 seats, it featured gaslights that could be switched on or off simultaneously with one electric switch. The Grand Opera House’s staged the nineteenth century’s best-known performers: Maurice Barrymore, Sarah Bernhardt, Sir Henry Irving, soprano Emma Albani and the Italian baritones Giuseppe Del Puente and Antonio Galassi.

In 1879 a major fire killed a stage-carpenter, his wife and infant daughter. An article in the New York Times on November 30, 1879 covered the details.*

Despite being restored and reopened after each fire, the Grand Opera House fell into neglect with the arrival of vaudeville in the 1900s and the modern vaudeville theatre, such as the Loews and Winter Garden Theatres on Yonge Street. 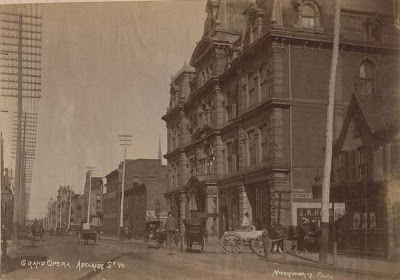 The story of Ambrose Small has resurfaced many times only to be laid to rest after the police officially closed the file on December 14, 1960 wherein it is reported they destroyed the Ambrose Small file.

In the interesting account of “The Disappearance of Ambrose Small: Case Closed” a producer of a television documentary proposal for History Television discovered an important document written in 1936 relating to the case. OPP Inspector Edward L. Hammond, the lead Provincial investigator in the case, summarized the Ambrose Small investigation from start to finish, including the names of the suspects and motives in his report. Hammond accused the Toronto Police detective, Austin Mitchell, of “orchestrating a deliberate cover-up.” Hammond’s report contradicts the official report released by the Ontario Attorney General on their Special Inquiry into the disappearance of Ambrose Small wherein it exonerated Theresa Small of any involvement in the crime. Hammond states in his report that “Ambrose J. Small…was the victim of a cunningly and well-conceived plan in which Mrs. Theresa Small his wife was the prime mover, and further more, I believe that she was actually present when her husband was murdered for there was no question, that she “knew all along, from that very day of his disappearance, as to what had happened to him also that John Doughty her husband’s secretary was one of the murderers too…”

I suspect the major reason this particular case was covered up was that Ambrose and Theresa Small were leading socialites in Toronto. The initial investigation was put on hold for two weeks as the police hesitated to call on Mrs. Small whose family was considered powerful and well connected. A note to consider is Inspector Hammond’s report was dated 1936, a year after Mrs. Small died in 1935.

The Grand Opera House was demolished in 1927 and the site is now occupied by the 68-storey Scotia Plaza in Toronto’s Financial District. The only reminder is a small lane running south from Adelaide Street West, named ‘Grand Opera Lane’.”

UPDATE: Here is a movie review for SLEEPING DOGS LIE based on the Ambrose Small disappearance:

"SLEEPING DOGS LIE * * setting: Ont./USA.
(1999) Wendy Crewson, Joel Keller, Leon Pownall, Michael Murphy, Eric Peterson, Shawn Doyle, Leslie Yeo, Shannon Lawson, Art Hindle, Cedric Smith.....A private eye (Keller) becomes embroiled in the mystery surrounding the disappearance of theatre impresario Ambrose Small in the '20s when he's employed by the millionaire's wife (Crewson). Fact-based (or, at least, fact-inspired) made-for-CBC TV suspense-drama suffers from unappealing characters, thin characterization, and a failure to really create the murky mood of conspiracies and paranoia that it's trying for. Crewson is badly miscast as a (cliched) femme fatale and baby-faced Keller's "decent" hero is a thug who beats up protesters and slaps women around -- ironic, since he's a fictional construction and so could have been written as a much more sympathetic (and fleshed-out) figure. It wants to be "Chinatown" more than a sleazy, true-crime-drama, but doesn't pull it off. Ironically, by playing Small's disappearance as a straight crime-thriller, it loses some of the eerie -- even supernatural -- flavour that probably made the case so notorious to begin with. sc: Raymond Storey (from the book The Strange Case of Ambrose Small by Fred McClemment). dir: Stefan Scaini. - violence, sexual content.- app. 90 min"

Reviews tend to be one sided and after viewing the trailer, I decided to purchase it.

The trailer can be seen here.

Sleeping Dogs Lie is available as a DVD through sullivanmovies.com

A popular landmark, with such controversial past, to be reduced to a just a small lane in a matter of a century is sad.

As always your post is an informative peek into the past Barbara.

I have been on a bit of a hiatus, which will likely continue, although I will try hard to keep posts flowing.

But, this post is an excellent reason to continue with furtive visits...

History, mystery, tarts, and sleaze. What more could a reader ask for? Thanks for the heaping serving!

The old 1879 newspaper article on the fire was very descriptive with phrases like "hair-breadth escape" and "gave an alarm." I could browse old newspapers for hours.

Those with influence are always treated differently, I fear. Wasn't it amazing how we spent money on making a building beautiful and not just functional.

Sad that such a beautiful building couldn't have been saved. Fascinating history, though. Thanks, Barbara :)

Such a pity that a building like that was demolished. Some very beautiful buildings have to disappear and make place for ugly modern constructions.Thanks for sharing and for your visit.

It would be interesting to see the TV documentary. Did it ever get beyond the proposal stage?
Another interesting look at the history of your town. Thanks, Barbara.

Interesting story about the Smalls. Just another of those mysteries that'll probably never be solved.

What a lovely building that must have been. I am saddened when we lose such architectural beauties.

Murder mystery and influential suspects, could it get any better?

What happened to his million bucks?

I loved this story, Barbara. One of my favorite genres is history mysteries. And I'm with Travis in wanting to know what happened to the million dollars?

For those who asked about the million dollars, it MAY have been released by the Ontario Attorney General's office once they had completed their Special Report exonerating Mrs. Theresa Small of any wrongdoing. They probably paid it to her estate as she had died in 1935. I do not know the specifics of the case, except the cheque had Mr. and Mrs. Small's signatures on it when deposited into the bank. The money remained in the bank until the Attorney General's office seized it as evidence during the criminal investigation. As long as the case was under investigation and still open the money would not be released to anyone.

I will do a bit more checking and when I learn the answer will add the information as an update to the bottom of the post.

Movie information: the movie was made and titled: SLEEPING DOGS LIE, released in 1998 through Sullivan Entertainment.

I will put the link and the trailer link on the post. The movie looks interesting and intriguing.

interesting on so many levels, Barbara.
Aloha-

What an interesting story. It gives a writer lots to think about. :) Toronto is still a great theater town. I saw Miss Saignon there years ago and had a great time. Can't remember the name of the theater, though.

Linda, I believe Miss Saignon played at the Princess of Wales Theatre.

Thank you for helping people get the information they need. Great stuff as usual. Keep up the great work!!!
home inspector tampa fl