My Town Monday - Toronto, Then and Now 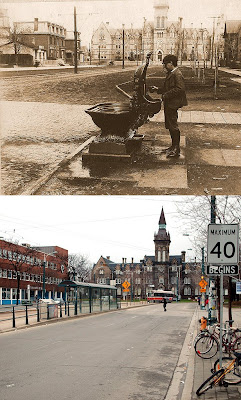 [Facing north on Spadina toward College - click to enlarge]


Victorian drinking foundation for humans, dogs and horses taken in April 1899, and below April 2008. Note the boy is collecting water in a cup. 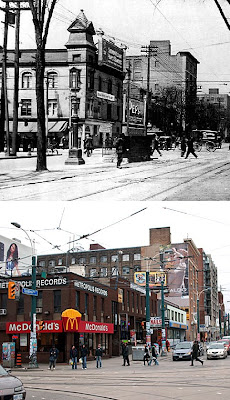 
At the intersection of Queen and Spadina Streets, the building with the ugly Aldo billboard is the survivor on this corner. One wonders why they demolish a building for what now houses a MacDonald's franchise. By looking closely at the lower middle of the top photo, you can see a stairwell descending into one of Toronto’s now long gone public toilets.

Travis Erwin from Amarillo, Texas is the founder of My Town Monday. For other locations to visit please go to Travis' site here.
Posted by Barbara Martin at 21:09

I love looking at then and now photos.
You always have interesting things to show, Barbara.

As always I love the old photos.

What a shame to put a characterless building where one so beautiful had been!

Interesting post, Barbara. I love the horse/human drinking fountain, and I agree the old building looks much better than the one with the McDonald's in it.

You think we'd make things prettier don't you, not worse. That first sepia photograph is wonderful.

I love the fountain - how smart was that! great comparison photos and yes, very sad to see McD's in place of the other structure.

A few old images can sometimes capture more about our past than words. Sad is when only the pictures remain.

I have seen wooden spring water fountains in some Austrian villages, with a cup attached by a string.

It has always be the case that beautiful buildings have to make place for an ugly nondescript thing. Only years later one start realising what damage was done.
Thanks for your visit! Have a nice day, Barbara!

Suddenly I felt transported back in time - but to London! Maybe not so strange...

I liked the drinking fountain. I don't think progress is always a good thing. I liked the before photos best. :)

WOW...its incredible. That architecture in both the images is still very much intact after 100+ years.

seems a shame to see one or 2 nice buildings still standing, but then ugly new ones in place of others!!! so sad!

Why does then always look better than now? Horse included.

Debra, funny how I prefer the then photos. Toronto is filled with all kinds of history.

David, then I will search for more.

Raph, so it seems everywhere I go.

Teresa, it wasn't until I looked at the large size photo that I noticed the lower bowl close to the ground where the boy is standing.

Pam, well in the 1920s man decided they wanted to be progressive and look to the future.

Reb, I feel the same way about the fountain.

Merisi, it's the older architecture I like. Perhaps the stonework appears more solid than the shining towers of glass and steel.

Wil, I believe some buildings were not kept up and had to be demolished due to unsafe conditions such as floors, wiring, etc.

RuneE, perhaps a past life remembrance? I have them.

Shelley, it seemed to be a simpler time, though I suspect they had 'hustle and bustle' too.

Thomas, there are still many buildings in Toronto that span 100+ years. I'm slowly writing posts about them.

Gary, I agree. People need to support their historical building societies to ensure the older buildings are kept up and remain for future generations to see.

Patti, it is perhaps we think it was a slower way of life, and yet, from discussions with my grandmother, she said it was very busy too. I suspect it's a perception we carry. She had said she was surprised to find Toronto and Montreal so progressive when she arrived in 1905 from Birmingham, England.

Myself, I could see going back to driving horses, but the long dresses and horrid corsets with whalebone stays??

I love looking at old pictures of cities that I am familiar with, but I never thought to side by side compare them with current pictures of the same location. It's so neat to see how much Toronto has changed over the years.

Fascinating contrasts. I, too, can't help preferring the older architecture, too. Most of our modern buildings are so boring.

I love the comparison photos..especially the first one. It's like time travel ;)

This is fabulous. I love the then and now. It really stimulates my imagination and I always wonder why really beautiful buildings were knocked down rather than renovated and shored up.

Love the comparisons through the years. I've thought about doing a similar post but wasn't sure of anyone outside of Amarillo would care.

Hallo Barbara, thank you for visiting my Belvedere post.
But you visited a "pre-finished" version of the post, it's much longer now :)
If you want to see the complete thing, please visit again :)
Thank you for giving me so very convenient hikes in Canada :))))

This is really fascinating. How much things have changed!

I enjoyed the before and afters!

They were hard times, though. My mom and dad and grandma lived not far away.

My birth mother had polio in her youth. Tough times. Things were different and it is difficult to compare.

I've been blogging about marketing strategies.

We know much more. We live longer. It is the quality vs, quantity of life that concerns me!

Lauren, this was brilliant of the photographer, James Boston, to come up with it. I will be borrowing from his idea in following historical building posts.

Bernard, they are indeed.

Linda, I like the carved scrolling and moulds on the windows and lintels.

L.A., it is, as you say, time travel through a corridor.

Terrie, many buildings that could have remained up were demolished before the heritage societies were formed. They try and save the buildings where they can now.

Travis, in any place it is always interesting to see the before and after photos.

Maria, I will be over later tonight. The next hike you should enjoy as well.

Bindu, I will be posting more on changes since others have the same interest I do.

Jenn, this post is mostly about buildings, though the times are relevant between eras. Each era has its own difficulties and progressions, though we have more social problems than the nearly non-existent ones a hundred years ago. It was and still is, a life of haves and have nots.

And to think I was at this intersection this past summer!

Barrie, everywhere you travel has some interesting bit of history. It's just waiting to be discovered.

These are fantastic images that you found; Thanks for sharing.