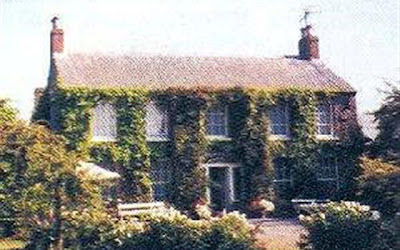 Camus House is ivy covered which dates back to 1685 and is built on the old Camus Monastery near Coleraine, Northern Ireland. The property is near the Bann River. This particular house is where my great-grandfather, Joseph Martin, and his brother, James McCardie Martin, D.S.O., were born. For years I was under the impression they had been born in England. It's nice to know I have more than a mere sliver of Irish in my blood; though my grandmother did tell me I had the eyes of the 'Black Irish'.

Its unfortunate I had not planned on this post, as I have two nice photographs of Uncle Jim, one in his naval uniform with the typical surgeon's beard, and one with his grey heavy hunter.

For those of Irish descent or well wishers, I hope you all had a grand St. Patrick's Day.

What a gorgeous house!! Do you still have distant cousins living in it? If you do, you should figure out a way to get an invite there for your next vacation. It looks so interesting.

What a lovely little cottage.

Teresa, the house is owned by people who run a Bed and Breakfast. I would gladly pay to stay there a night or two to see if I could feel the vibrations from the place. There's a lot of history in that house.

On the first link to the name are aerial maps of its location: a nice beautiful green farm property.

Charles, I love these quaint places in the UK. The house looks like it belongs in a Charles Dickens or Jane Austen novel.

I bet it would have vibrations!! You could probably set several stories in and around it.

What a beautiful house! It looks really atmospheric and welcoming.

What a wonderful cottage. On St. Patrick's Day everyone is Irish!
Both my daughters went to the parade in Cleveland. For once it was warmish and sunny.

Cloudia, perhaps that is where I get my love of beer from.

Raph, I can almost feel how relaxing it would be there. I'm sure there must be local stories about the place.

Debra, I'm glad to be a bit Irish because then I can admit to seeing faeries.

Happy St. Patrick's day! That is such a gorgeous house! How interesting to trace back your roots and know the places and people from then.

What a great house; it must be a fun B&B to stay at. It sounds like your family was what my grandmother called "cut glass Irish", i.e. upper class. My folk were "lace curtain Irish", i.e. middle class. My grandma was born in Northern England but her dad was from Belfast and her mom was from a small fishing village in County Down, so they were Ulster Scots. (What Americans call Scotch-Irish)

I want to live in that lovely old house.

How nice you know this tidbit about your ancestors and even have a picture of the house. I agree, it would be wonderful to stay there.

Leigh, I felt the same way when I first saw it.

Shauna, in a couple of years I'd like to go there to visit and to Wales where another relative, Catherine Hutton, had a collection of prints of the clothing the Welsh wore in the mid-1800s. Catherine was a writer with writerly connections (1756-1846) such as Sir Walter Scott.

That place whispers to me of warm fires and the sound of rain at the window...

Bindu, it was a lucky find at the last moment before I posted.

Linda, it's only my grandmother's side through my mother that were upper middle class. My grandmother when she came to Canada fell in love with a merchant who was beneath her status, yet was determined to marry him despite whatever her father said. She had to leave her father's care, live on her own, work and support herself for a year before she would be able to marry. I have her diary and will perhaps do a short post at a later date with the entries.

What a wonderful thing to work towards Barbara, your trip to Ireland and Wales. It would be fun to stay in Camus House with your connection to it. As a fifth-generation Australian, it is wonderful for me to touch, experience or stay in houses and buildings from the 1600's when overseas,as our settlement history is very young in comparison, (although the indigenous sites, of course,are ancient)My ancestors were also Irish,and as a young couple,amongst the earliest settlers in our state. South Australia was the only state to be founded on free settlers, not convicts. In the 1800's,these ancestors lives were tough and rural, with eventually twelve children to support.I enjoyed your post.

Steve, to add to your eloquent words...with a glass of Bushmill's Irish Whiskey. My other favourite alcoholic beverage.

Pam, I had a couple of cousins go to Australia and Tasmania in 1898.

Barbara,
The nice thing about being Irish or Scottish is that, at least among fellow crazy Celts, you can admit to faeries, ghosts and other unworldly things and none will think you daft.

My Irish roots run through Counties Clare, Kerry, Antrim and Limerick. My Antrim MacDonald ancestors came to Ireland from Islay, off the coast of Scotland, in the early 1400's. Of course, they originally migrated from Ireland to Scotland in the late 5th century.

J.L., there's a nice feeling knowing where one's roots originate. I have always felt a pull to Scotland, the English Midlands and the Shetland Islands. When I lived in London, England for two years I loved the feel of the place. It was like I had come home.

great cottage, barbara... as is the knowledge you can truly call yourself a colleen of the olde sodde ;)