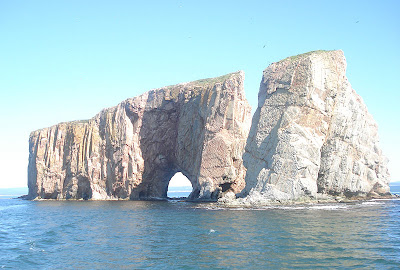 “Percé Rock (French for "pierced rock") is an island and sheer rock formation in the Gulf of St. Lawrence just off the tip of the Gaspé Peninsula in Quebec, near the village of Percé. It is one of the largest and most spectacular natural arches in the world. 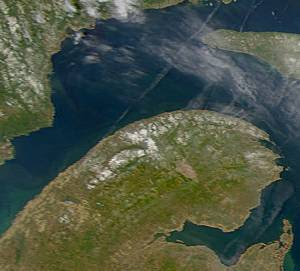 
Together with Bonaventure Island, Percé Rock is part of the provincial Parc national de l'Île-Bonaventure-et-du-Rocher-Percé. 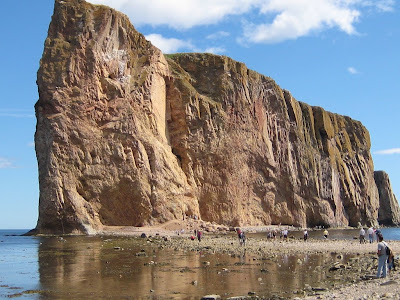 [3-The Perce Rock with tide out - click to enlarge]

There were actually two arches in the rock, until the outer arch collapsed on June 17, 1845. For four hours at a time during low tide, the water recedes from a wide spit that allows the rock itself to be visited. Percé Rock is a major tourist attraction. It contains millions of marine fossils such as trilobites, tetracoralla, brachiopods and ostracods from the Devonian period. 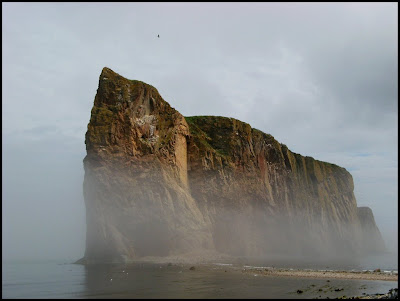 
As of May 2008, access to Percé Rock is only possible while being accompanied by a guide. Contact Parcs Quebec for more information.”

This is a place I have always wanted to visit and listen to the sea call to me.

Perce Rock must be an awesome sight on a stormy night.

I've seen this on TV quite a few times but these pics are very nice. I didn't know about the old arch that collapsed. It's always interesting when landscapes change like that in historical time.

Looks peaceful and yet mysterious.

This sounds like a fantastic place, Barbara. Now I just have to find time and money for a tour of Canada. Your blog posts have whetted my wanderlust.

Kia ora Barbara,
When I got to the description of the sheer size of it I literally gasped, that is huge! Is there a particular reason that access is limited to being guided? I hope you get to visit and share here with us.
Cheers,
Robb

Bernard, there would have to be lightning to see it. In the daytime I can imagine the waves crashing on the rocks.

Charles, the sheer size of the rock is fascinating.

David, even the photos from a distance show its magnificence.

Teresa, trips could be made at different times because in each location there is so much to see and do.

Robb, I imagine guides were enforced due to the possibility of rocks falling at any given time, and they have either a cell phone or some method of contacting assistance should it be necessary. Also, people tend to forget the time when discovering new areas and it wouldn't take much to become stranded when the tide came in. Then you'd have to swim to shore.

There's a big draw to see the fossils in the rocks.

Fascinating Barabra - I'd hate to get stranded with an eerie mist- maybe the guide IS a good idea!

The Perce Rock in mist - my favourite! How impressive this rock is! Great!

It looks amazing! I'm sure there are those who climb this rock to the top.

How impressive Barbara! It's huge! I can understand that you love to be there! Thanks for sharing and for the interesting information!

Lovely post with exquisite choice of images. The image of the rocks in mist is so beautiful.

Barbara, I found a wonderful piece of advice by Charlotte Gray about being cut off by the tide, in a quotation book about grandmas.To young people she says... "Try hard NOT to drop Gran in it after a day out. There is really no need to tell Mum you got cut off by the tide. Not unless helicopters were involved".