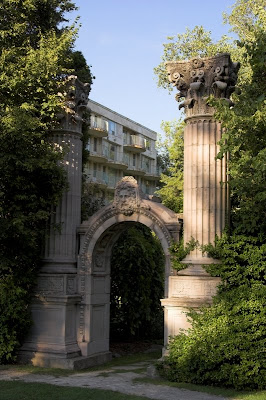 
Guildwood Park is 90 acres adjacent to Lake Ontario and the Scarborough Bluffs is operated by the City of Toronto. Inside the park is the Guild Inn, consisting of a 33-bedroom pseudo-Georgian villa built in 1914 as ‘Ranelagh Park’ for Colonel Harold Child Bickford (1876-1956). 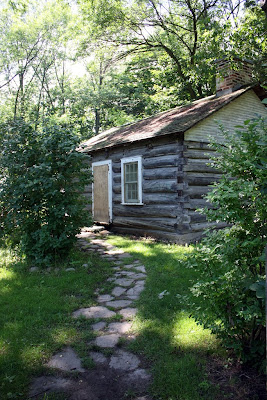 From 1921 the property went through a variety of owners including Rosa Bretihaupt Hewetson, heiress to the Hewetson Shoe Company who purchased the villa and 40 acres of property in 1932. Ms Hewetson soon married Herbert Spencer Clark with the Guild becoming their home and private museum. During the Great Depression, the Clarks created The Guild of All Arts.

On property adjoining theirs, they set up cottages and workshops for staff and their families, which later became homes for The Guild’s resident artists. The Clarks provided studio space and some accommodation for those artists who had no other source of income. The Clarks hoped that the artists would be inspired by the beautiful setting to use their creative talents, and, in the process, to earn a living. 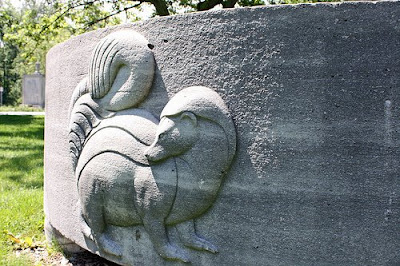 [3 - Skunk, one of six animal bas-relief panels from the Bank of Montreal building sculpted by Jacobine Jones]


The majority of the artists’ crafts were practiced in what had been the garage and stables, now known as ‘The Studio’. The area between the Studio and the Inn had been General Bickford’s polo grounds. Soon the Clarks’ dream came true as visitors came in increased numbers. They added dining facilities and guest rooms in the early 1940s, and the Guild earned a reputation as a country inn with talented artists. 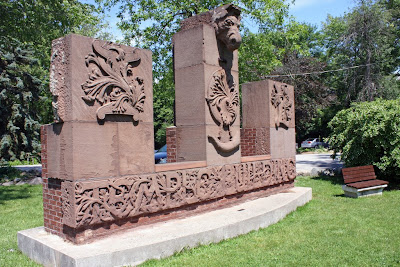 [4 - Temple Building blocks in 1895, at nine stories was the tallest building in the British Empire. These are located in the North Garden. Click to enlarge.]


To protect the setting and allow for expanding recreational needs of the country inn, the Clarks purchased surrounding farms and soon their lands amounted to 500 acres, stretching from Lake Ontario to the Kingston Road, and from Livingston Road to Galloway Road. 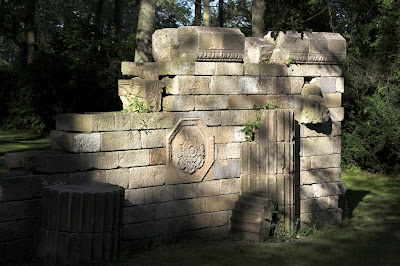 
From 1942 to 1947 the federal government requisitioned the property, converting it into a residential training centre for the Womens’ Royal Naval Service (WRENS). It was known as ‘HMCS Bytown II’. After the war, the property became a specialized military hospital in the treatment of personnel suffering from nervous disorders and became known as ‘Scarborough Hall’. 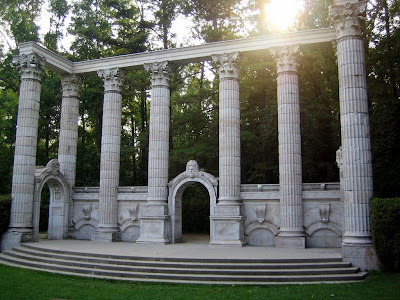 
In 1947 the property was returned to the Clarks and they re-established the Guild of All Arts. When Metropolitan Toronto was formed, property taxes rose at an alarming rate and the Clarks sold 400 acres of their land for development. Spencer Clark oversaw the developers as they created a community that would be called Guildwood Village. With the retained 90 acres around the Guild, the Clarks began to gather pieces of architecture from Toronto’s historic buildings when they were being destroyed to make room for the development of new skyscrapers. 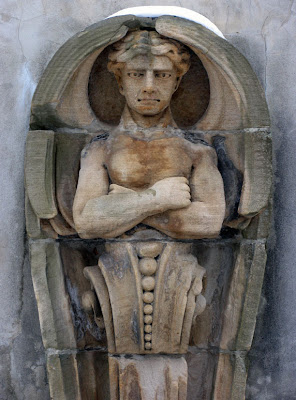 
Around the house and on the grounds, Spencer Clark placed his collection of columns, capitals, reliefs, carvings and façade elements taken from banks, churches and office buildings that were being demolished. In 1965, the six story, 100-room east wing was added to The Guild Inn to accommodate the increasing number of visitors who came to see the craftsmen at work and the beautiful gardens on the property. 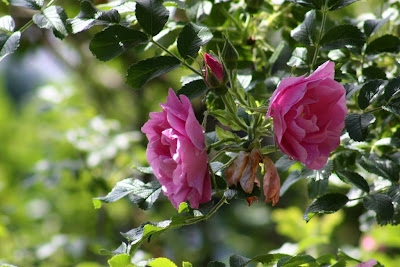 
In 1978, The Guild and its surrounding lands were purchased by the Metropolitan Toronto and Region Conservation Authority and later transferred to the City of Toronto. 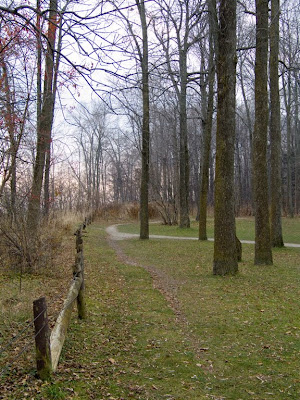 
As a city park, The Guild is open to all during daylight hours, seven days per week. 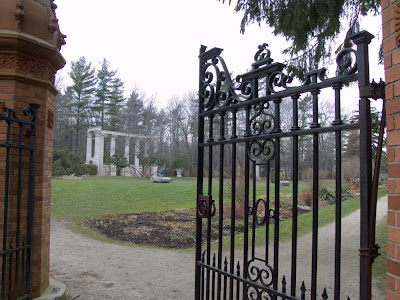 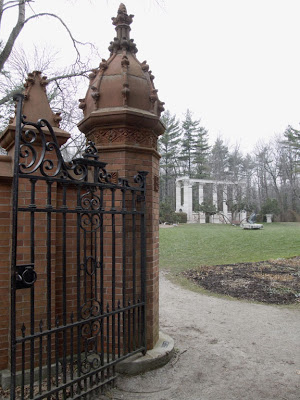 
It hosts many tours and special events. The walks, trails and gardens are popular with joggers, dog-walkers, birdwatchers allowing escape from the City of Toronto. 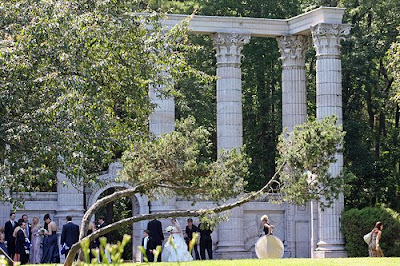 [12 - The Greek Theatre with a bridal party]


Although the former arts centre and hotel closed in 2001, the City has recently approved a plan by Centennial College to build a hotel, restaurant, and conference centre on the site. 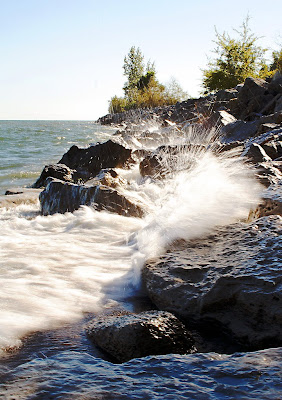 
Travis Erwin from Amarillo, Texas is the founder of My Town Monday. For other locations to visit please go to Travis' site here.
Posted by Barbara Martin at 00:25

The archways reminded me of the Robert Jordan fantasy series "The Wheel of Time" where arched doorways are represented as doorways into other worlds or timeframes within the dimension.

It's great that the parkland is there, with architectural mementos of Toronto (and York's ?) past. It's too bad that the Guild is gone for artists. Thanks for bringing this to us, Barbara!

That must be a very thrilling place to visit. When history and photographic subjects go together I'm very happy.

PPS No, I'm not back at the hospital - I shot it last week. Always carry a camera ;-)

Thanks Babara another informative post one of your pics has a person with a reflector does this mean lots of people go there for wedding photos ? looks an excellent place to do so.

WOW...Beautiful post and your choice of images amazing Barbara

Those archways are indeed stunning.

The Clarks had the foresight to preserve pieces of the architectural history of the city. What a gift. It seems like an amazing resource.

What an amazing place to wander with a camera. Lovely shots and terrific lesson.

You outdid yourself today!

Chris, in 1967 I had visited the downtown core of Toronto and seen the beautiful carvings on the older stone buildings. Later, after moving here I wondered where they had gone after seeing the tall office towers, especially the carvings from the Bank of Montreal building. Photos of those carvings will be posted at a later date.

This is what I miss about the newer buildings, where as far as I am concerned, have no character to them. They are stark and impersonal.

RuneE, I plan on going in June when the weather is warmer to walk through the gardens.

Philip, yes, there are many bridal parties here for their photos to be taken. Other parks with flower gardens in Toronto are used for this purpose.

Thomas, thanks and I had many choices of good photos. There will be another post on this park to cover several magnificent items missed here.

Debra, I'm very glad they did. These pieces hold an era of stone masonry one doesn't see often.

Michael, welcome and yes it is a beautiful place.

If ever I find myself straddled with Tycoon Wealth, I'd have to create something much like this....

I am sadden that the buildings were demolished for "progress", but, I am glad the Clarks had the wherewithal to save the artistic details for posterity. It looks like a wonderful place to visit.

Patti, thtere were too many good photos to choose from. I left out enough for two more posts. I can see myself spending a whole afternoon in this park just being with the exhibits.

Steve, spoken like a true artist. I love this park and its architectural exhibits.

I first noticed architecture when we went to Paris for our post-honeymoon. We lived in Ottawa at the time.

When we visited Toronto, I realized there are some lovely old buildings here, too.

Thanks for pointing these out!

What a great park, and how wonderful that the Clarks were able to preserve so much of Toronto's architectural heritage, and how good of them to take care of starving artists. My ancestors lived in a log cabin like the one in the park.

The park looks like a beautiful place to wander around with lots to look at.

I love the skunk!! This is really cool.

Lovely tour photos. Thanks!
We have a stone pathway through our back garden that looks exactly like the one leading to the log cabin in your photo!!

Reb, sometimes the older buildings' inards need major repairs and it is for financial reasons they are demolished as it is cheaper to rebuild.

Jenn, Ottawa, Montreal and Quebec City have some lovely older buildings too.

Linda, the Guild was quite well known at the time and many Hollywood stars stayed at the Inn.

Shelley, if you look at the pdf map you can see the layout of the gardens and where the statues and artwork are situated.

Teresa, there was a photo of a pair of wolves, but the skunk was cuter.

Pamela, I'm pleased to hear you liked this virtual tour.

How interesting to see how many different phases this place has seen. I wonder what would have happened to all the beautiful pieces if Spencer Clark hadn't purchased them. Very serene location.

Bindu, I would hate to think of these statutes and facades being crushed to make gravel or road fill.

Barrie, it is possible you were there. They do arrange for cultural events, weddings, etc. through Ontario Heritage site. Your enthusiasm is infectious!

Sorry I'm tardy in getting here to comment but it has been a hectic week.

But once again let me say I love the great architecture of your area. Wish we had more here.

Barbara - I'm a local resident of Guildwood and always appreciate reading the history of the Guild Inn and seeing the unique images from this urban oasis. Your website is wonderful. Question: Given the current state of decline of the grounds, monuments and gardens, I'd like to see the Guild Park designated as a National Historic Site. That way the Park would qualify for federal funding. Comments?

John, welcome and thank you for your comments. With respect to your query I would suggest writing to the City of Toronto Parks Department to voice your concerns over the lack of care. The site certainly has merit to become a historic site. A letter would need to go to the Historic Sites and Monuments Board of Canada. There is an online address: 1115
hsmbc-clmhc@pc.gc.ca
to put forward requests. To get a good response from the government, a multitude of letters ought to be sent on the subject. It's that old adage of "the squeaky wheel gets the grease".

Please send me an email (at top of blog).