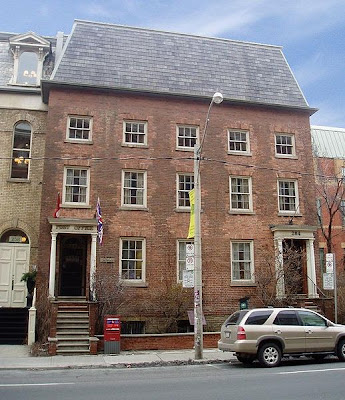 The York Post Office became Toronto’s first in 1834, built in 1833 by James Scott Howard who was the postmaster of York, which served as a post office until 1839. It is the oldest ‘purpose-built’ post office in Canada which served as a department of the British Royal Mail. Howard had purchased the plot of land from the Bank of Upper Canada, thus creating a financial centre for a city with 9,000 people.

Postmaster Howard was caught up in the politics of the Rebellion of 1837 and framed as an aid to the rebels and unfairly dismissed from the bank’s directorship without formal charges. His position was given to Charles Albert Berczy, who resided in the post office until 1839 until Berczy relocated operations to Front Street west of Yonge.

Howard had moved his family north to a farmstead in 1835 and rented the building to various tenants until he was able to sell it in 1841 when it became the home of hardware merchant, Thomas Denne Harris. In 1873 Harris sold the building to the Christian brothers, who ran a school out of the old bank building (which had failed in 1866). During the passing of a century, the neighbourhood changed from residential to commercial and industrial and the building changed hands many times. A fire on June 30, 1978 seriously damaged the building, leaving it roofless. Rescued by private owners, it was lovingly restored and in December of 1983 was reopened as Toronto’s First Post Office under the direction of the Town of York Historical Society.


Today the building has a museum and a full-service post office run by the town of York Historical Society, and is located at 260 Adelaide Street East, one block north of King and one and a half blocks east of Jarvis. In the museum is a scale model of Toronto in 1837 as it was in Upper Canada. Visitors are provided with the opportunity to write letters with a quill pen and seal them with wax as was done in the 1830s. The style is in the late Georgian architecture.

Travis Erwin from Amarillo, Texas is the founder of My Town Monday. For other locations to visit please go to Travis' site here.
Posted by Barbara Martin at 20:59

Barbara, you never fail to find Toronto spots I have failed to visit! I really must hop in the car, tourist map in hand. I shall wait till this current blizzard finishes...

I'll have to take my kids the next time we're up. Thanks, Barbara

WOW...it is nice to know that the post office is still fully functional. Thanks for the informative post.

Who would imagine the interesting history behind that little building? I loved the bit about the postmaster being framed for aiding rebels and replaced, not something one typically associates with a Post Office!

Jenn, not to worry...there are many places in Toronto I haven't been to either. I like my seek and find photos for this post.

Barrie, you're quite welcome.

Thomas, I was surprised when I uncovered the history behind this gem.

Excellent idea--having a museum plus working PO! if I am remembering correctly, isn't this the prettiest and oldest neighborhood in TO?

I love the fact that the building was restored after the fire and that is is still the post office.

I hope to get to Toronto in Sept. so I'm storing these sites.

What a lovely building. I love the Toronto history I've learned from you here!

Y'all have us whooped. Trust me when i say there are no fully functional post offices in all of the US. They are full of crazy people like myself.

Gary, this is the oldest portion of Toronto with the neighbourhoods of Corktown and Cabbagetown close by. The Enoch School which I posted about several weeks ago is in Corktown. The tree lined streets of those neighbourhoods with the older houses provide a reminder of the past.

Debra, it was nice that private citizens pooled their money to buy the property to restore it.

Patti, then I will be certain to find more interesting places for you.

Mary, the building has a charm to it when standing on the sidewalk infront.

Tony, I'm pleased there are others interested in preserving our history.

That would have been in the times when post offices were interesting.Australia Post is now just instantly recognizable in its boring shopping centre presentation with equally bored queues. Give me a good old fashioned gossipy post office any day, particularly one harbouring an accused aid to rebels!My goodness- what was this 1835 rebellion! I loved the country post-offices of my childhood- it was exciting to go there with my grandmother to collect her mail-one a huge old place on top of a hill, the other,after she moved, a tiny building opposite a railway station,both historical buildings.Thank you for sharing this Barbara, and for thinking of Australia on your side-bar.

As always, I am amazed by how well the buildings you post have held up through the centuries.

Another informative post. You're the greatest promoter for Canada's tourism industry.

i always feel a tad smarter after reading your blog Barbara :)

Thanks again for all the positive support, it means the world to me.

Great post, Barbara. You are a growing repository of Canadian architectural history on the web.

Pam, isn't it interesting that we like the same things...must be having opposite star signs. That was the rebellion my great-great-grandfather was involved in. He got away with his life, too. I will be posting about this closer to summer after I complete posting the early history of Canada to show why the native population acted the way they did to the Americans during the War of 1812.

Australia is a part of me as I have distant cousins living there.

Bernard, perhaps it is the stone and mortar they used; or plain luck.

David, well I wouldn't say the 'greatest', but just one of many. Some who visit here want to stay.

Josh, knowledge is easier to remember when provided in small doses.

Cloudia, thank you for your kind comments.

Bindu, yes, this is a little gem of preserving a bit of the past for the current generation.

What a lovely old building. York is a charming neighborhood. I visited one December years ago when there was snow on the ground and Christmas lights. Loved it.

Linda, Christmas is one of the better times to visit Toronto. The decorations and lights for the season make everything cheery.