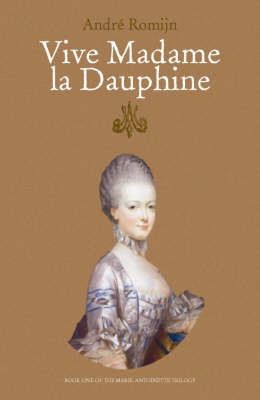 I enjoyed this hardcover book by taking the time to savour its essence; which is why the review is late. The author, André Romijn, writes in an eloquent style that compliments the story well. Once I finished the Prologue the book became difficult to put down.

This is Book One of the Marie Antoinette Trilogy, a biographical novel where the plot is already taken care of, the fictional narrative wrapped around the true facts. The story, as it unfolds, provides a feeling as if you, the reader, are encountering the same vivid and well described situations and encounters at Versailles as Marie-Antoinette.

At fourteen, Marie-Antoinette was married to Louis-Auguste, Dauphin of France, the future Louis XVI. While at the Royal Court, Marie-Antoinette is learning her match with Louis-Auguste is not popular among the elder members. The long-standing tensions between Austria and France had only been mollified with her marriage despite courtiers still actively promoting a match with various Saxon princesses.

The marriage was initially amiable but distant as Louis-Auguste's shyness meant that he failed to consummate the union, much to his wife's distress, whilst his fear of being manipulated by her for Imperial purposes caused him to behave coldly toward her in public.

Marie-Antoinette soon learned the distinction between life at the Royal Court in Versailles and her previous home in Vienna. Her parents, the Emperor and Empress, had a relaxed court life with a variety of changes: being a relatively lax dress etiquette, and a private life developed by the Hapsburgs that were off-limits to the rest of the court. In their private life the family could dress in bourgeois attire with no reproach, play games with non-royal children, had schooling, and were treated to gardens and menageries.

These customs did not mesh well with the protocol of French court, including the servants Marie-Antoinette had to attend her every need.

Many other courtiers, such as the comtesse du Barry, King Louis XV’s courtesan, had a more or less tenuous relationship with the Dauphine. When Marie Antoinette asked “Who is that woman” to the Mistress of the Household about Madame Du Barry, she replied “That woman is here to give pleasure to the King”, and Antoinette replied, “Well I am also here to give pleasure to the King!”

From the beginning of her marriage, the Dauphine had to contend with constant letters from her mother, who wrote to her daughter regularly after receiving secret reports from Austrian Ambassador Mercy d'Argenteau on her daughter's behaviour. In return, Marie Antoinette would write home in the early days stating how she missed her dear home. The Dauphine was also constantly criticized by her mother for her inability to “inspire passion” in her husband, who rarely slept with her and had no interest in doing so, being more interested in his hobby of making locks and hunting; and was told again to promote the interests of Austria and the House of Lorraine, of which Marie Antoinette was a member through her late father. The Empress, Marie Therese, criticized the Dauphine's pastime of horseback riding, though paradoxically the Empress's favorite portrait of her daughter was one of her in riding garb.

To make up for the lack of affection from her husband and the endless criticism of her mother, Marie Antoinette began to go riding to the hunt with King Louis XV dressed in an outfit like a man to much scandal among the nobility. She formed a relationship with the widow, the Princess de Lamballe, a cousin.

Interspersed with Marie-Antoinette's life at Versailles are visits from the Austrian Ambassador Mercy who patiently tries to inform her of the politics and financial status of the Royal Court and France.

There is a section in the book where Marie-Antoinette approaches King Louis XV and stands up to him after receiving his criticism through a personal palace assistant, the Mistress of the Household. The King is shocked by her brazen approach, yet responds carefully, worried the outcome of this conversation will make its way back to Maria Therese, the Empress of Austria.

Another section is of Marie-Antoinette returning to Versailles after a drive to find her husband, Louis-Auguste, working in the forge with his upper body bare amongst the labourers of the palace. Enraged she tells him off infront of those present ending with a comment about his lack of attention in the boudoir. Later that night the Dauphin attends to his duties to consummate their marriage.

During a function at Versailles and at a masked ball in Paris, Marie Antoinette encounters Count Axel von Fersen, a Swedish diplomat, where both reveal a mutual attraction to one another.

Christoph Willibald Gluck, her former music teacher, whom she took under her patronage upon his arrival in France arranged for operas to play in Paris. A week after the première of Gluck's opera, “Iphigénie en Aulide”, which had secured the Dauphine's position as a patron of the arts, that Louis XV began to fall ill on April 27, 1774. On May 4, the dying king sent comtesse du Barry away from Versailles; and on May 10, at three in the afternoon, he died of smallpox at the age of sixty-four.

The book ends with Louis-Auguste recoiling from Marie Antoinette’s offer to assist him with his future governing of France, revealing to her his intention to rule in the absolute manner of his forefathers.

A nice touch to this book are the epigraphs before each chapter containing a dated page from the journal of the Princesse de Lambella. The book also includes a section entitled Historical Notes that provides a glossary with detailed description of terms, names, locations, a map of France, and geneological lines of the Houses of Bourbon, Austria, Savoy, Stewart Descent of Louis XVI, and a Table of Spanish Succession.

I look forward to another well written book with vivid descriptions of history during 18th century France and a new portion of Marie-Antoinette’s life.

Biographical novelist, André Romijn, spent many years in the Netherlands Royal Navy. After coming ashore, he established his name as a publisher of professional journals. For the past decade, he has lived and worked in North Yorkshire, England. His next book, due for publication in Autumn 2009, is titled ‘A Perfect Woman’ - Book Two of the ‘Marie Antoinette Trilogy’.

Barbara, I look forward to you remaining posts on this series. Now that I've read your review, I feel compelled to purchase this work and read it for myself. You are a wonderful reviewer.

Rick, the book was exciting in the way the narrative was presented.

Charles and Bernard, thank you kindly.