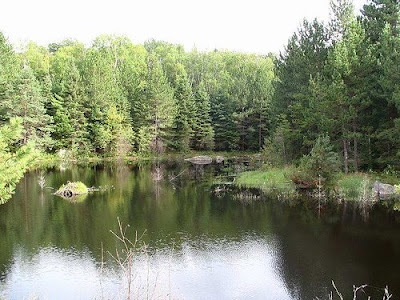 Beavers are two primarily nocturnal, semi-aquatic species of rodent, one native to North America and one to Europe. They are known for building dams, canals, and lodges (homes). They are the second-largest rodent in the world (after the capybara). Their colonies create one or more dams to provide still, deep water to protect against predators, and to float food and building material. The North American population was 60-400 million, but as of 1988, 6-12 million, due to being hunted for fur, for their glands used as medicine and perfume, and because their harvesting of trees and flooding of waterways may interfere with other land uses. 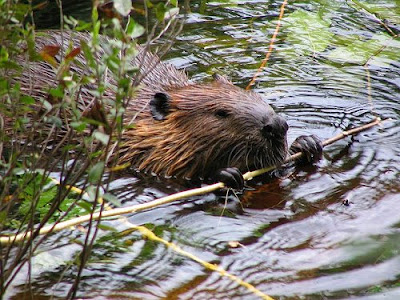 [2] Beavers are known for their natural trait of building dams in rivers and streams, and building their homes (known as beaver lodges) in the resulting pond. Beavers also build canals to float build materials that are difficult to haul over land. They use powerful front teeth to cut trees and plants that they use for building and for food. 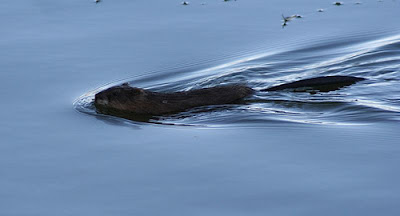 They are known for their "danger signal": when startled or frightened, a swimming beaver will rapidly dive while forcefully slapping the water with its broad tail. This creates a loud "slap", audible over large distances above and below water. This noise serves as a warning to beavers in the area. Once a beaver has made this danger signal, nearby beavers dive and may not reemerge for some time. Beavers are slow on land, but good swimmers that can stay under water for as long as 15 minutes. 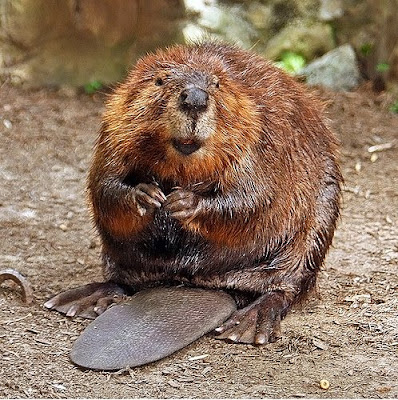 [4] Beavers do not hibernate, but store sticks and logs underwater to feed on during the winter. They have webbed hind-feet, and a broad, scaly tail. They have poor eyesight, but keen senses of hearing, smell, and touch.

Beavers continue to grow throughout life. Adult specimens weighing over 25 kg (55 lb) are not uncommon. Females are as large as or larger than males of the same age, which is uncommon among mammals.

The American Beaver (Castor canadensis), also called the Canadian Beaver (which is also the name of a subspecies), or simply Beaver in North America, is native to Canada, much of the United States and parts of northern Mexico. This species was introduced to the Argentine and Chilean Tierra del Fuego, as well as Finland, France, Poland and Russia. 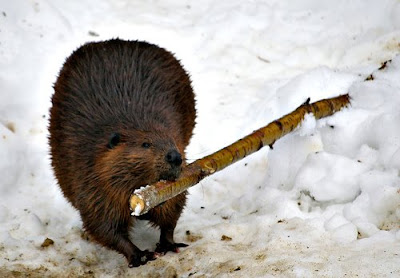 [5-Beaver moving branch to lodge] The American beaver's preferred food is the water-lily (Nuphar luteum), which bears a resemblance to a cabbage-stalk, and grows at the bottom of lakes and rivers. Beavers also gnaw the bark of birch, poplar, and willow trees; but during the summer a more varied herbage, with the addition of berries, is consumed. 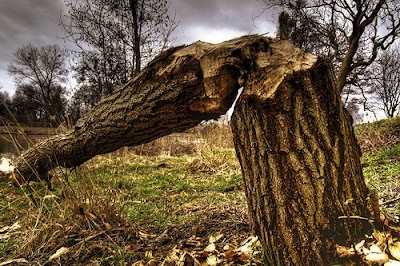 These animals are often trapped for their fur. During the early 19th century, trapping eliminated this animal from large portions of its original range. However, through trap and transfer and habitat conservation it made a nearly complete recovery by the 1940s. Beaver furs were used to make clothing and top-hats. Much of the early exploration of North America was driven by the quest for this animal's fur. Native peoples and early settlers also ate this animal's meat. The current beaver population has been estimated to be 10 to 15 million; one estimate claims that there may at one time have been as many as 90 million.

The North American Giant beaver (Castoroides ohioensis) was one of the largest rodents that ever evolved. About the size of a Grizzly Bear, it disappeared along with other large mammals in the Holocene extinction event, which began about 13,000 years ago. 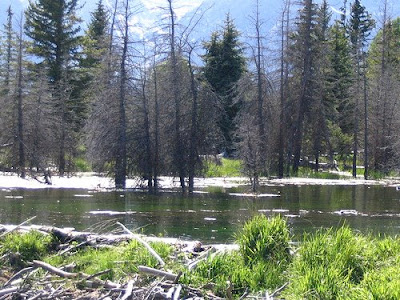 Dam building can be very beneficial in restoring wetlands. Such wetland benefits include flood control downstream, biodiversity (by providing habitat for many rare as well as common species), and water cleansing, both by the breakdown of toxins such as pesticides and the retention of silt by beaver dams.

Beaver dams are a nursery for salmon. An early indication of this was seen following the 1818 agreement between the British government of Canada and the government of America allowing Americans access to the Columbia watershed. The Hudson's Bay Company, in a fit of pique sent word to its trappers to extirpate the fur-bearing animals in the area. The beaver was the first to go. Salmon runs fell precipitously in the following years even though, at that time, none of the factors were extant that we associate with the decline of salmon runs. 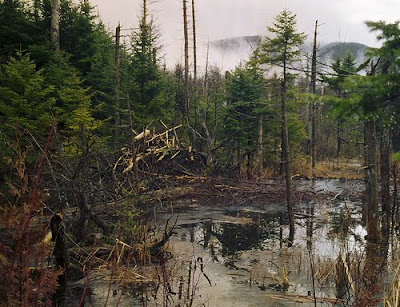 The functions of beaver dams in increasing salmon runs are many. They provide deep enough water for the juvenile salmon to hide from predatory wading birds. They trap nutrients in their ecology and notably the huge nutrient pulse represented by the migration of the adult salmon upstream. These nutrients help feed the juveniles after they finish their yolk. They provide quiet water so that the young salmon can put energy into growth rather than into fighting currents and larger smolt with a food reserve have a better chance when they reach the sea. And beaver dams keep the water clear which favours all the salmonoids, trout included. 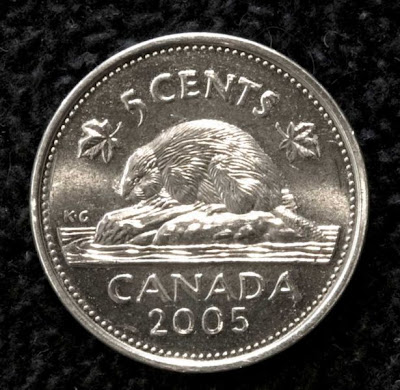 [9] The importance of the American Beaver in the development of Canada through the fur trade led to its designation as the national animal. It is depicted on the Canadian five-cent piece [photo] and was on the first postage stamp issued in the Canadian colonies in 1849 (the so-called "Three-Penny Beaver"). As a national symbol, the beaver was chosen to be the mascot of the 1976 Summer Olympics held in Montreal with the name "Amik" ("beaver" in Anishinaabemowin). The beaver is also the symbol of many units and organizations within the Canadian Forces, such as on the cap badges of the Royal 22e Régiment and the Canadian Military Engineers. The trade in beaver pelts proved so lucrative that the Hudson's Bay Company honoured the buck-toothed little animal by putting it on the shield of its coat of arms in 1678. The Hudson's Bay Company shield consists of two moose and four beavers separated by a red St. George's Cross, and reflects the importance of this industrious rodent to the company. A coin was created at that time to equal the value of one beaver pelt. There is a magazine called "The Beaver", first published in 1920 by Hudson Bay Company, that is still being published today.

In the 17th century, based on a question raised by the Bishop of Quebec, the Roman Catholic Church ruled that the beaver was a fish (beaver flesh was a part of the indigenous peoples' diet, prior to the Europeans' arrival) for purposes of dietary law. Therefore, the general prohibition on the consumption of meat on Fridays during Lent does not apply to beaver meat. The legal basis for the decision probably rests with the Summa Theologica of Thomas Aquinas, which bases animal classification as much on habitat as anatomy.

I'll let my wife know that there is another alternative open for her during Lent.

By the way I think you'll enjoy my MTM post this week.

A beaver the size of a Grizzly. I bet the trees didn't care much for those guys.

Very informative post.
They are not to be confused with muskrat, though. I thought it was our beaver romping through our garden. It chopped down all of the bulrushes at the edge of our swamp. Turns out it was the muskrat on a tear. It boldly came up on shore and chomped away on some of my prize plants before I could blink.

Considering the strong associations in my mind between the beaver & Canada, I was quite surprised to learn that they live here, too!

Travis, I'm sure she'll be quite surprised.

Ah, my curiosity is piqued.

Charles, if the beavers were that large perhaps the trees were taller. We don't know for certain.

Jenny, when winter brings its icy chill I have a nice long muskrat coat to wear.

Your encounter was because that daft thing hadn't been threatened enough by humans. You could set up a sensor light with a buzzer.

Lana, I was surprised they were found in Mexico!

Wow! That was a great info on beaver. Thanks for sharing :)

What a wonderful and informative post! Thank you! I've always enjoyed watching the beaver, but doubt I would have enjoyed the (Castoroides ohioensis!

I'd never heard about the 'Grizzly' Beaver before. I'm with Charles. It would have been a bad day to be a tree. :)

Sekhar, I'm planning on doing more posts on the animals in Canada while adding in a bit of history.

Dark Wolf, they are interesting to watch in the water, swimming while floating a birch branch alongside.

Bernard, and a tasty tidbit for some larger predator.