My Town Monday is the brainchild of Travis Erwin in Amarillo, Texas where group participants tell something about their location on the globe. You can find Travis' weblink on the side bar under My Town Monday. {NOTE: History posts have been moved to Wednesday] 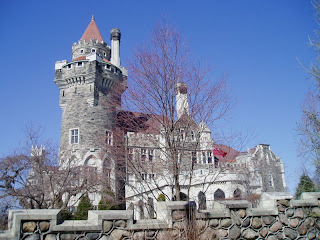 [1] Casa Loma (Spanish for “Hill House”) is the former home of financier Sir Henry Mill Pellatt and a major tourist attraction in Toronto. 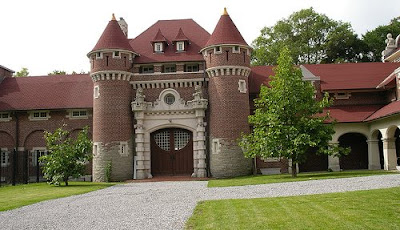 [2] The stables [photo] were used as a construction site for the castle, with some of the machinery still remaining in the rooms under the stables. 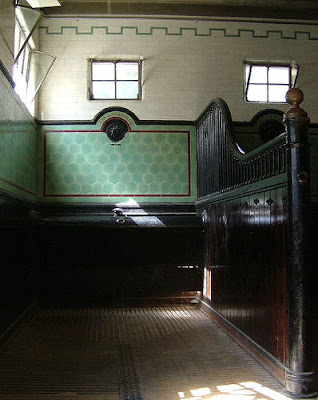 
The house cost approximately $3.5 million and took a team of 300 workers three years to build from start to finish. 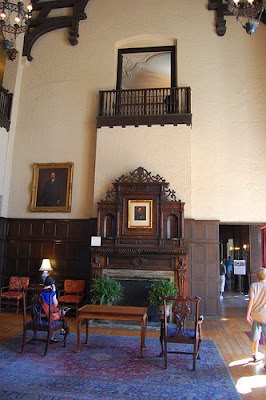 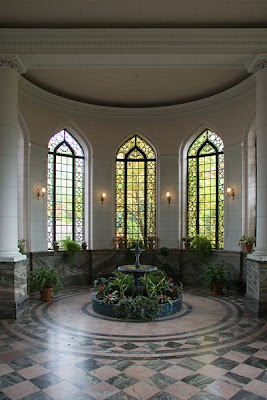 
Sir Henry filled Casa Loma with artwork from Canada and around the world. Casa Loma stood as a monument to its creator - it surpassed any other private home in North America. With its soaring battlements and secret passageways, it paid homage to the castles and knights of days gone by. 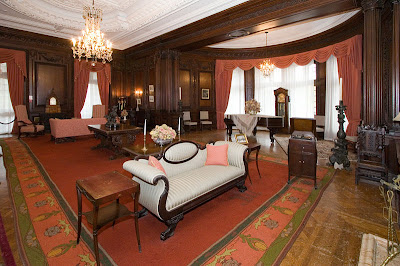 Casa Loma's romantic borrowing from the past, tempered by necessary modern day conveniences, provided the perfect setting. In the height of their years at the Castle, the planning of such a busy social calendar consumed much of Lady Pellatt's time. 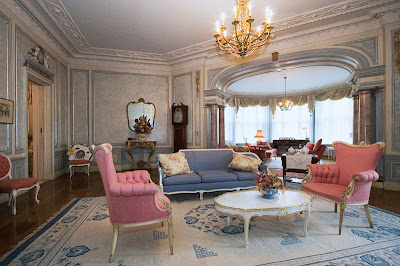 
In addition to hosting grand social events, the Pellatts were involved in a number of philanthropic projects. Sir Henry was a trustee and benefactor of Trinity College and a strong supporter of Grace Hospital. The organization of the St. John's Ambulance Brigade in Canada is due largely to his efforts. Lady Pellatt, in spite of her frequent confinement to a wheelchair, played an active role in the promotion of Girl Guides in Canada. She was appointed the first Commissioner of the Girl Guides of Canada and in 1919 was honoured with the Girl Guides' highest award, the Silver Fish. 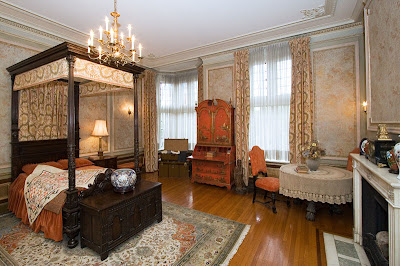 
Many of the rooms were left unfinished, and today serve as the Regimental Museum for The Queen's Own Rifles of Canada. Pellatt joined the Regiment as a Rifleman and rose through the ranks, eventually becoming the Commanding Officer. He was knighted for his dedication to the Regiment. Later, Pellatt served as the Honorary Colonel and was promoted to Major-General upon his very grand retirement in Pasadena California.

[10-Interior of Top of East Tower]

Sir Henry was able to enjoy life in the castle for ten years, leaving in 1923. Vacant while proposals were considered for its future use, architect William Sparling put forward a proposal to convert the house to a luxury hotel in 1925. A long term lease was granted to Sparling to open a hotel within Casa Loma. He began completing the Great Hall and the Billiard Room, areas that Sir Henry had never finished. Sparling planned to add two large wings to the main building, one to the east and to the west, each wing containing 96 full suites and 56 rooms. At an estimated cost of $1 million for each wing, they were never built. The hotel failed in 1929.

During the late 1920s Casa Loma was also a popular nightspot. The Orange Blossoms, later known as Glen Gray and the Casa Loma Orchestra, played there for eight months in 1927–1928. Shortly thereafter, they went on tour of North America and became a major Swing Era dance band. 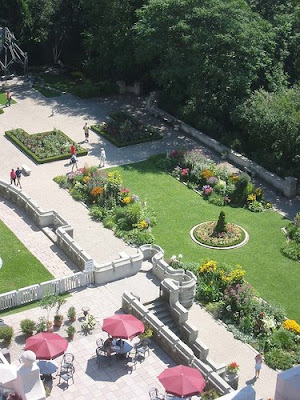 [11-Part of the five acre gardens from above.]


During the Depression, Toronto increased Casa Loma's annual property taxes from $600 to $12,000 (this approximately translates to an increase from $6000 to $111,000 in today's currency), and Pellatt—already experiencing financial difficulties—was forced to auction off $1.5-million in art and furnishings for $250,000 during bankruptcy hearings. In 1933 the city seized Casa Loma for back taxes owed, which totaled approximately $3000. Rather than file for bankruptcy and lose his knight hood, which Pellatt cherished, he was forced to sell Casa Loma for well below market value at $27,303 to the City of Toronto.

None of the suggestions for possible use proved feasible and the City considered demolishing the castle. In 1936, The Kiwanis Club of West Toronto proposed that they operate the Castle as a tourist attraction. The City of Toronto agreed and in 1937 Casa Loma opened to the public after extensive refurbishment by The Kiwanis Club. 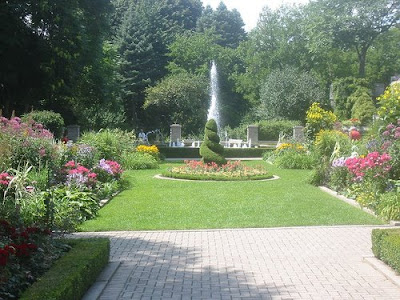 
Today this unique piece of Canadian history is open daily as a tourist attraction and hospitality venue. Casa Loma is financially self-sufficient and contributes close to $1 million annually to the City in licence fees and taxes. Net proceeds from the operation of Casa Loma support a wide range of the Kiwanis Club's charitable works.

Under the careful stewardship of the Club and its professional staff, the Castle remains one of Toronto's top ten tourist attractions and hospitality venues. In 1998, 375,000 visitors toured the Castle and gardens. A perfect backdrop for special occasions, the castle played host to over 200 functions with almost 30,000 guests attending during the year. Casa Loma's unique architecture has also made it a highly desirable location for film, television and photography shoots. For example, it has served as a location for movies such as The Love Guru, X-Men, Strange Brew, Chicago, The Tuxedo, and The Pacifier. Comic books and children's novels that have used it include the Scott Pilgrim series and Eric Wilson's murder mystery, “The Lost Treasure of Casa Loma”. It was also temporarily transformed into “Hogwarts” for the release of the 7th Harry Potter book. 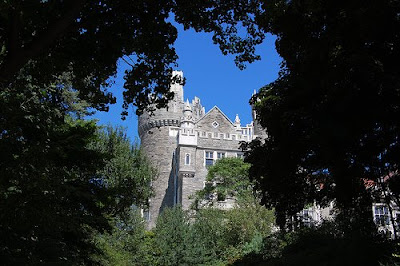 The tour of the castle is self-guided. Visitors can experience the castle at their leisure with the aid of an audio cassette and floor plan brochure. Casa Loma provides audio cassettes and tour brochures in the following eight languages: English, French, German, Japanese, Mandarin, Korean, Italian and Spanish. 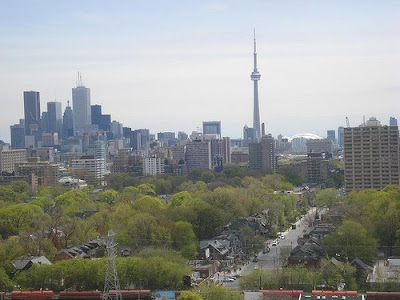 
Casa Loma is on Austin Terrace, at the north end of Spadina Road on an escarpment (Davenport Hill) above Davenport Road. Davenport runs along the bottom of the escarpment which was the shoreline of Lake Iroquois, the predecessor of Lake Ontario. Casa Loma affords views down the escarpment and Spadina Avenue into the heart of Toronto. 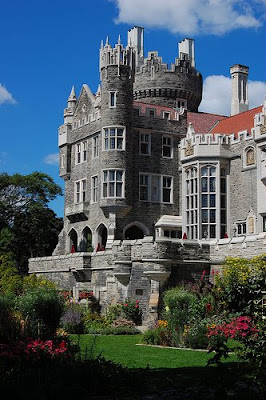 I lived in Toronto for a year with a couple of friends. We were all security guards at the time. I joked about wanting to work at Casa Loma so that when someone asked what I did for a living, I could say, "I guard the castle."
Lovely pix!

Can you believe I've never been to Casa Loma. Even with these great photos, I should go the next time I'm up.

Casa Loma is a truly wonderful place! The horses' stables must be among the most luxurious ever, and the conservatory looks like a place where I'd love to have tea. Thank you for giving us a virtual tour! :-)

Thank you for visiting my blog and your kind comment and link to my blog!

It's wonderful that these old places built by such fine craftsmen have been restored and preserved. Thanks for another look.

Nice explain with these photos...

wow... thx barbara, it's been eons since my last visit there....

It would have been such a shame if the city had torn it down! I love to see beautiful old landmarks preserved like this. Gorgeous!

We are woefully shy of interesting architecture in my neck of the woods but I might try and dig up some for a future MTM.

No doubt your summer residence!

Lana, it's always nice to revisit places you've lived in, isn't it?

Barrie, that makes two of us.

Your blog has an exquisite grace.

Dark Wolf, I have always loved castles. It must be from a past life.

I have been there. Twice. It's fabulous and so are these pictures.

Debra, I enjoy discovering and looking at these grand places for a look into a long gone era.

Tony, then you have good memories.

Willow, there are historic landmarks in the Kingston vicinity which I will be posting about soon, that I'm certain you will find to be equally wonderful.

Travis, you have a huge state to look in.

Charles, actually my summer residence has only electricity, no running water, a cast iron wood stove and an outhouse. I could live there in winter should I choose to.

Wow, what a tour, it is always nice to be able to wonder through these places at your own pace. Thanks for sharing these photos and telling about the castle, it is such a beautiful place. Just stopping by to say Hi and inviting you to come on by.

Thank you for your kind words and commentary about the stewardship of Casa Loma and the Kiwanis.

I haven't been there in years! Thanks for the trip down memory lane! I love the photos.

What a great place. I know I have seen it in movies and on telly, but if I ever get out to Toronto I will have to see it in person. Thanks to the Kiwanis and the city for saving it.

i do, was most impressed by the secret passages, tho a tad tight for me :O lol

Margaret, I do have these virtual tours of historical buildings once in awhile.

David, welcome. I appreciate the beauty and craftmanship that went into the planning and construction of this building. Casa Loma is a wonderful reminder of days from another era.

Jenny, memories are nice to keep.

Reb, it is a beautiful place. I like the idea of the cassettes so you can take the tour at a leisurely pace.

Tony, anyone in need will fit into a secret passage.

Thomas and Shipley, thank you for your kind comment.

Pretty amazing what those fin-de-seicle plutocrats were able to do, eh? Hard to imagine Bill Gates or the Sultan of Brunei building something this cool!

I've been to Toronto twice, but never got to visit Casa Loma, much to my regret. Thanks for the virtual tour, Barbara. What a gorgeous building. I'm so glad the Kiwanis club was able to save it and preserve for future generations. Next time.

Steve, Sir Henry wasn't the only rich person building a castle replica in Ontario at the turn of the 20th century. There are several in the Kingston area.

Linda, now you can put Casa Loma on your list to visit when you return.