Lady Chatterley's Lover is a novel by D. H. Lawrence written in 1928. Printed privately in Florence in 1928, it was not printed in the United Kingdom until 1960. 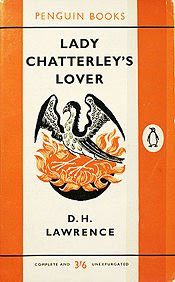 When I first read this book, it was in the early 1970s and as part of a course I was taking dealt with women’s roles over time. Alberta, at that time, censored all media coming in: books, films, magazines, newspapers and news. Anything controversial never reached the public consumer; if it did, when discovered was quickly removed and disposed of. The copy I read was abridged, with almost no sexual content in it except for brief passages where the reader could surmise the actions intended. Only Lady Chatterly’s adultery with a commoner could be taken to task.

However, the copy I read recently for this post was unabridged. Under today’s standard of obscenity, there is nothing amiss with this book. For those concerned with moral issues, unfortunately, it promotes adultery.

Why all the fuss over this book? The fuss had been about the intimate scenes, the use of strong language and the adultery between a woman from the aristocracy and a commoner.

The novel had been banned in the United Kingdom for obscenity, including initimate activity, obscene words and adultery of a woman of status with a commoner. There they referred their decision on important tests of obscenity such as the Hicklin test stemming from an English legal case R. v. Hicklin (1868), LR 3 QB 360, in English Common Law, stated that legislature could outlaw anything that, “depraves and corrupts those whose minds are open to such immoral influences and into whose hands a publication of this sort might fall,” for example, children. If one small portion of a work was deemed obscene, then the entire work would be forbidden. The Hicklin Rule was utilized up until the 1930s, when it was eventually abandoned for the “work as a whole” test.

When Lady Chatterly’s Lover was published in Britain in 1960, the trial of the publishers, Penguin Books, under the Obscene Publications Act of 1959 was a major public event and a test of the new obscenity law. The 1959 act (introduced by Roy Jenkins) had made it possible for publishers to escape conviction if they could show that a work was of literary merit. One of the objections was to the frequent use of the word “f**k” and and its derivatives.

Various academic critics, including E. M. Forster, Helen Gardner, Richard Hoggart and Raymond Williams, Norman St John-Stevas were called as witnesses, and the verdict, delivered on 2 November 1960, was not guilty. This resulted in a far greater degree of freedom for publishing explicit material in the United Kingdom. The prosecution was ridiculed for being out of touch with changing social norms when the chief prosecutor, Mervyn Griffith-Jones, asked if it were the kind of book “you would wish your wife or servants to read”.

The Penguin second edition, published in 1961, contained a publisher's dedication, which read: “For having published this book, Penguin Books were prosecuted under the Obscene Publications Act, 1959, at the Old Bailey in London from 20 October to 2 November 1960. This edition is therefore dedicated to the twelve jurors, three women and nine men, who returned a verdict of 'Not Guilty', and thus made D. H. Lawrence's last novel available for the first time to the public in the United Kingdom.”

The story concerns a young married woman, Constance (Lady Chatterley), whose upper-class husband, Clifford Chatterley, has been paralysed and rendered impotent. Her sexual frustration leads her into an affair with the gamekeeper, Oliver Mellors. This novel is about Constance's realization that she cannot live with the mind alone, but must also be alive physically.

As the relationship between Lady Chatterley and Mellors develops, they learn more about the interrelation of the mind and the body; she learns that sex is more than a shameful and disappointing act and he learns about the spiritual challenges that come from physical love.

Perhaps the idea of a woman being a sexual being and actually becoming sexually frustrated is what freaks people out. What silly fools.

Now I want to read it!

Thank you for your recent comment, I'm glad you can see my light shine, I appreciate that.

Well done. You get the feeling that this case and the publication was the snowball that began rolling down the hill of the 60s and all the changes.....

read lcl at about the same time, but got my copy from buffalo, ny

i did i find it 'obscene', rather enlightening, informative, and for lawrence, well written

nor did i think it promoted adultery, rather that it has continued, likely since time immemorial, and will continue, regardless of my thoughts on the matter

Thanks, Barbara. I must read it again.

I enjoyed reading the book in college very much, and on literary merit alone, the writing was exceptional. Lady Chatterley's torturous internal conflict in committing adultery is a point seldom made when the book is discussed.

Thanks for this reminder that some published works go through real struggles to see the light of day in a bookstore or a library.

Never read this, although I've intended to. I have a copy.

Suzie, that was only part of it. Women in 1918, in the United Kingdom, were allowed to vote providing they were 30 years old, had property, or were married to man allowed to vote, or were affiliated with a university who had electoral rights.

Very few other countries allowed women to vote. It set a standard of obedience.

Gary, yes, many changes have occurred over the years to the benefit of humans' lives. There are still other countries who need to provide humanitarian rights to their citizens.

Tony, the book had been written in a period where women, no matter their rank in society, had little control in their lives. In essence, they were chattels. It would be a difficult choice for a woman of status to commit adultery with a commoner. If she were found out, her livelihood would be ruined: her husband would cast her out amid the scandal of her peers. Under the circumstances, it was a risk Lady Chatterly decided upon in the heat of the moment, where she submitted to her primal urges. In a class of status, women and men were expected to control themselves; while those lower down the scale were seen to have less control.

Certainly adultery still occurs, but there are circles, moral and legal, where it is frowned upon.

Patti, a reread when older provides new insight into the conditions of the time, and a deeper understanding of human behaviour.

Bernard, she took a horrible risk despite Oliver's urgings for her to go away with him. She realized she would be unable to give up her luxurious life for him.

Men of the time, in similar circumstances, had the option of having their fling with nothing said provided they kept it discreet. Often the lover was sent away to another district to avoid scandal. If they could not send the woman away, or there was wide spread scandal, it was not uncommon for men to commit suicide.

I have been meaning to read the book and it is on my stack of "must reads". I did think the 2006 film version was beautiful. Interesting post, Barbara.

Terrie, yes, even today there are books about certain topics from WWII which are still unavailable in Canada, even though they are published in the United Kingdom.

Charles, perhaps you should.

In the late 60's in Australia it was off the banned list. As there was so much hoo-har about it at the time, I read it when I was around 18 and wondered what all the fuss was about. I thought it was well written.I also loved Lawrence's Sons and Lovers, and decided that those two books were among my favourites, and that he was a perceptive author, who had a handle on the complexity of human relationships.

Ha, I also want to read it now!

It is so hard to imagine that I was already born when a book like this was brought before court and deemed obscene!
I was 3 years old in 1960!
In the first half of the 1970ies our awareness of life, our attitudes were so different (but not our parents'), we wrote essays in high school about gender roles, about green themes and society, about democracy, totalitarianism or socialism! Some weeks ago I read Alexandre Dumas's 'La Dame aux Camélias' (publ. 1848). Again: what a different world!
Although, there are, of course, places on earth (or even in ones own country) where women's lib and free sexuality is not so self-evident as one might assume.
How many muslim girls are still killed by their brothers when they act against their strict moral codes!
And when I think of my own family ,how upset they all were when I divorced from a husband after 5 years of marriage, not even having children with him...
OK.
Thank you for this interesting post!

Pam, when I did read the unabridged version I found a few places which made more sense than during the first read. It seems when the offending passages were removed, whole paragraphs went with them, thus changing the flow of the story.

I found that in some other abridged books I read while in high school, college and university the flow of ideas and their meanings were non-existent. Then when reading the unabridged version certain areas made sense.

Willow, now you can look forward to reading it with a bit more insight.

Maria, we could think that men over the centuries have feared us to place us into this role of unequality. Thus, placing strict social norms in every community to control us. What are men afraid of?

What are men afraid of, that's a good question. I don't know. Maybe they are afraid of losing us? For making us leave them more difficult?

Maria, I had read articles about Atlantis where women held the power over all. Perhaps this is where it stems from.