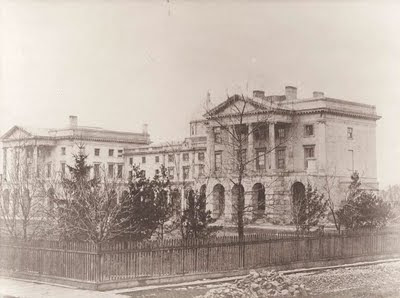 Osgoode Hall, now a National Historic Site of Canada, occupies six acres that had been acquired by the Law Society of Upper Canada in 1829. The name Osgoode Hall honours William Osgoode, the first Chief Justice of the province. Osgoode Hall has withstood more than ten major restorations. 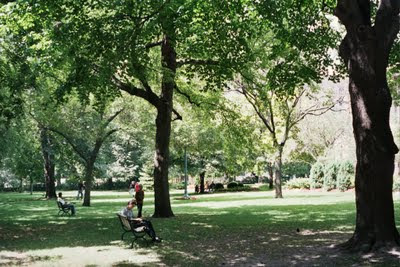 
The front facade kept its original 1860 design although the original building had been built in 1832. The final expansion was completed in 1891. [4] East side of Osgoode Hall showing addition and older section to the rear. 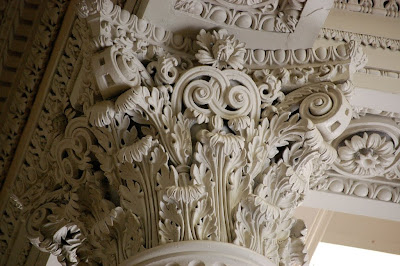 [6] Ceiling of the main reading room in the Great Library


The interior of Osgoode Hall reflects 19th century architecture. Convocation Hall has various stained glass windows detailing the history of law. The Great Library has detailed plastering in the ceiling and cork floors. The rotunda has inlaid tiling on the floor with arched pillars. On the walls hang oil paintings of former Chief Justices of the Province.

In 1842, the city's northern limit was Dundas Street with the west boundary at Bathurst Street. In 1851 Osgoode Hall had streets surrounding it rather than farm fields. In 1858 there was an addition of an iron fence surrounding the landscaped grounds to keep cattle off the grounds. In 1855 the court system was expanding, requiring more space. The firm of Cumberland & Storm were selected as they had designed such notable buildings: University College, St. James Cathedral, the 7th Post Office, several county courthouses, schools, and private homes in Ontario.

The Prince of Wales, the future Edward VII, opened the new addition on September 8, 1860. [8]
The Rotunda features 19th century paintings, a skylight, a tile floor installed in the late 1850s. In the centre stands a statue to commemorate World War II.

Courtrooms #2, 3, & 4
The Courtrooms were designed between 1856 and 1860. Rosettes, cornices and figures are carved into the woodwork in Courtroom 3. The recent restoration of Courtroom 4 included extensive research of archival documents, photographs and site testing, such as paint sampling. The room is now believed to resemble its 1860s appearance quite closely. The American Room was built in 1895 and features a stunning cast iron spiral staircase. The area was designed to provide as much wall space as possible and features a second level. [10] The library holds nearly 17,000 books. The electrical fixtures in the room are the original design. Within the Great Library is the Main Reading Room which houses the largest private law library in Canada with about 125,000 volumes. Some date back to the 16th century. Designed in 1857-1860, it features original etched glass windows, distinctive craftsmanship of the era, and a marble statute as a memorial of World War I, at the east end of the library . See photo No. 12. My Town Monday is the brain child of Travis Erwin. You can find his link on the sidebar on the right.

What a wonderful tour and my feet don't even hurt! I know I would love Canada.Time always seems an issue when travelling.Doing it this way is delightful. Can't thank you enough for your fascinating posts and historic insights.

Pam, after finding the photos and information on Osgoode Hall I want to go back inside, although previous visits have been on lawyers' errands. In the rotunda it seems as if you can feel the antiquity of the place: old and solid.

I enjoyed the show, Barbara. The grounds are almost as spectacular as the ornate courtrooms.

Just gorgeous. I am definitely getting geared up for a trip to Toronto that includes some of the places you've written about.

What a fabulous building and it has such a long and interesting history.

Stunning. That place is gorgeous and I'd love to visit someday.

The library? I want it. In my house with all the books. I just salivated over the pictures of the library. I always said if we became millionaires the first room to be built in my dream home would be a library. :D

Thanks for the tour Barbara.

Wow! What an amazing photo tour...

Cork flooring has proven it can stand the test of time and has also covered the Library of Congress for decades.

For more info on cork floors and how Wicanders cork oak floors represent a generations-old balance between environmental conservation, creation of wealth, and social development that benefits millions of people worldwide, please visit our blog: http://www.wicanderscorkoakblog.com

I don't why why but the great architecture you've shown us here and before really surprised me.

Bernard, Patti, Terrie: The park outside is lovely in the summer, with park benches to sit and enjoy the oasis in the downtown core.

Pretzel and Steve: The library is a favourite of mine, too. It is rather grand. The covers on the books from the 16th century still have their gold lettering on the spines.

Travis, then you'll be surprised some more when I do posts on the historical buildings in Montreal and Quebec City.

I did find, while browing Flickr for photos, an interesting array of the architecture on houses in Waxahachie, Texas. Perhaps you'd like to do some research on the houses and their gingerbread trim.

I am always in awe of the craftsmanship that went into our old government buildings. What magnificent workmanship! Thank you for posting about this beautiful place.

Wow, what a ornate building and beautiful grounds. Like others have mentioned, the library really jumps out. It reminds me a little bit of the John Adams library in Quincy, MA but on a slightly smaller scale and minus the fantastic spiral staircase.

Parts of Osgoode Hall remind me of some of the interior of St Peter's Basilica. It is just simply mindblowing. Seriously.

The Library, the Library! I love that Library, look at the books, they would find my deceased and decayed remains in there, curled up around one of those precious books.

You know I knew of some of the most beautiful country and natural sights of Canada, I never realised the buildings were so incredible too.

I came over to tell you something and I've forgotten what I was to tell you.

Everything is just so big over there, the mountains, the falls, the winter, the bears! and the buildings.

I'm thinking a new slogan for Canada, "big and beautiful."

The trees are Eucalyptus, there about 700 species, the ones that look smaller around our area, (which ironically is called the Mallee), are Mallee Eucalypts, but there are many others too, all commonly called; "gumtrees".

Down south in the cooler parts they are huge, majestic and breathtaking trees, on the Murray River, the same, huge big river redgums, there can be small shrubby types, especially up around the desert climate area, the Millewa...and some of the ghost gums seem to have a skin! I will try and find my trees with skin and put up their photo.

I plant flowering red ironbarks around here, they have a lovely red (or white) flower, and are Eucalypts too.

Debra, David, Sienna: it seems the methods the old stone masons and arbitects did is vanishing. Although the plans for Osgoode Hall have survived, and are to be found on the Ontario Archives website.

For readers information about Sienna's second comment, I had asked about the trees alongside a lane in a photo on her Australian blog.

What a magnificent old building. The interiors are gorgeous and I love the wrought iron gates.

Barbara - What a fabulous building , absolutely amzing !!
Thank you for your kind comments on my Blog x

I love the interior of the Hall. In fact I enjoyed the entire tour. I wish it was nice and sunny like that today in NZ. I'm sheltering from the rain in a cafe!

Linda, only today I learned that in WWI when the country was gathering iron works and pieces for the war effort, Osgoode Hall refused to donate their iron fence.

Debbielou and Shelley, there was quite a bit of information about Osgoode Hall and I tried to concentrate on bits to give an overall view. For more information check out the referenced sites.

Wonderful images! Wood-panelled libraries and wrought-iron gates are two of my favourite things.

Mary, with the older buildings in Toronto there is a character in the architecture not found anywhere else.