Travis Erwin posted today about his three favourite places to relax and recharge his energy.

First and foremost, my favourite places begin with Banff National Park. The photo below shows Mt Rundle set behind the Vermilion Lakes. My next visit there will be to attend a writers workshop at the Banff School of Fine Arts. 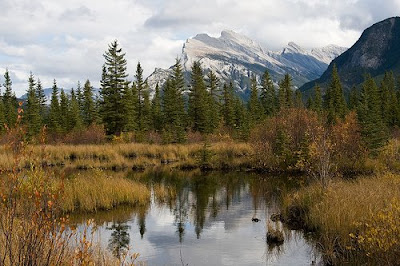 My second favourite place is the National Art Gallery in London, England where I spent two Sunday afternoons per month when I worked overseas almost ten years ago. It was a good place to view the masterpiece works of art, see the special exhibits that came from Europe which included the Dutch impressionists, and sit on benches near a portrait or a scene of any particular piece. They were all wonderful.

The National Gallery, located on the north side of Trafalgar Square, has over 2,300 paintings, most on permanent display. The collection ranges from early works by cimabue, in the 13th-century, to 19th-century Impressionists, but its particular strengths are in Dutch, early Renaissance Italian, and 17th -century Spanish painting.

The gallery has flourished to international reknown since its inception in the early 19th-century. In 1824 George IV persauded a reluctant government to buy 38 major paintings, including works by Raphael and Rembrandt, and these became the start of a national collction. The collection grew over the years as rich benefactors contributed works and money.

One of my favourite painters is George Stubbs and this painting of Whistlejacket was on exhibit while I was in England. The National Art Gallery rotates their paintings for display as they have more paintings than available space. 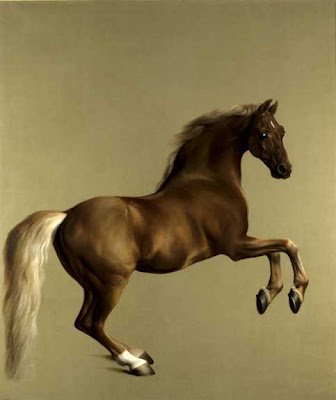 A third favourite place I go for relaxation is the Bruce Trail System which runs along the Niagara Escarpment. 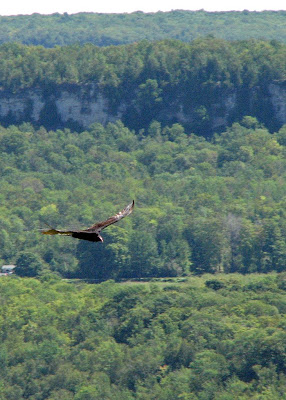 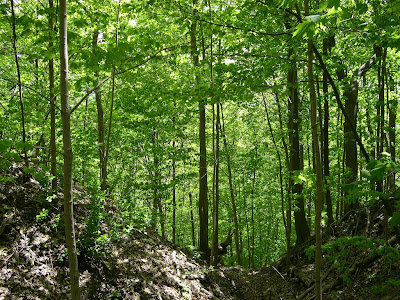 [6-Bruce Trail on the Niagara Escarpment]

These photos are taken on the Bruce Trail near the Town of Campbellville (northwest of Toronto).

The Bruce Trail System is the longest public trail system in Ontario from Queenston to Wiarton of 845 km of main trail. My favourite hiking spot is from Milton to Beamsville where the trail hugs the ancient shoreline of Lake Iroquoia, an area famous for waterfalls.

I'd like to go to a writer's retreat there. Wow.

Charles, there is a course "Writing with Style" in September this year which I am considering going to. The admission fee is: $330. The Banff School has reasonable accommodation rates and a meal package that makes it easier to work on your projects. It's a good, long walk into town down Tunnel Mountain, or a short drive, if you rent a car. The instructors are well known in their fields.

I like your choice of trails. Any trail with waterfalls is a real treat.

great pics, barbara, i have been in banff and surrounds

i think the appalachian trail is longer, being some 2175 miles in the states [georgia to maine] and another 1,100 km from new brunswick to the gaspe

Bernard, waterfalls are great places to stop and rest. Listening to water roar or trickle is an enjoyable activity.

Laughingwolf, certainly those trails you mentioned are quite long. I don't know if I would have enough energy to even begin such a long hike.

Travis, the Banff Centre which I have linked on the sidebar, offers other interesting workshops in the arts: media, sound, photography, film, ballet and theatre. The place is geared for the serious minded creator. When thinking of a workshop it is important to register early as the spots get snapped up.

Just think, you could get in some fishing too at Canmore just outside the park gates.

I have fond memories of the Bruce Trail, myself, but that photo of Banff Nat'l Park is absolutely stunning!

Steve, yes, the photo of Mt. Rundle with the Vermilion Lakes fits in with other famous shots of the Rockies: Lake Louise, Moraine Lake and the Athabasca Glacier. My other favourite scene is of the Banff Springs Hotel (now named the Fairmont, but to me it will always be one of the best CPR hotels).

For me, it would be thrilling to walk trails like this in another country. I have not been to your part of the world(only the U.S) but I would love to go even as far as Alaska.As an Australian, My memorable walks have been in Wales and Scotland, and locally, Tasmania. New Zealand is next on the agenda and Canada and Nova Scotia would be right up there on my wish list.For now, I will just dream away with yur wonderful postings.The workshops, by the way, sound great.

I've not been to any of these lovely places! My husband took a trip to Banff and brought back a camera full of all sorts of beautiful pictures. I've been wanting to go ever since.

Pam, glad you could drop by. I find that photos can take you away to another place for a brief moment where you savour the emotions drawn out. They are also very good at producing plot bits for my work in progress projects.

Alyssa, then you will just have to make those arrangements. Maybe even sign up for one of those workshops.

I agree with Bernard; I favor trails that have waterfalls. We've got one nearby called The Grey's Mare's Tail, and it is beautiful.

Gorgeous photos, esp. the first one of the mountain. Beautiful countryside in your part of the world.

Lana, I find it necessary to go out into nature to relax, get some exercise and then the creativity that was lacking returns in a rush!

Mary Witzl, then I will post photos of waterfalls when I find them on my walks.

Sphinx ink, welcome and enjoy your stay. Come back anytime to browse, the door is always open.

Mary, I can imagine the spooks he sees behind bushes and trees, the prancing and the jet propulsion he obviously has in the hindquarters. Might put a Quarter Horse to shame.

I love chestnut horses with flaxen manes and tails, though.

I forgot to mention in my previous comment, I have placed a link to the Bruce Trail system along the Niagara Escarpment for those who are interested in the upper sidebar section under CONSERVATION OR NATURE CONNECTIONS.