One prolific type of park inhabitant are squirrels found in Canada's urban communities, woods and parks. This is a photo of the Red Squirrel in Eurasia. This species of squirrel is on the near threatened list and is protected in most of Europe. The red squirrel used to be widely hunted for its pelt, and in Finland squirrel pelts were used as currency in ancient times, before the introduction of coinage. 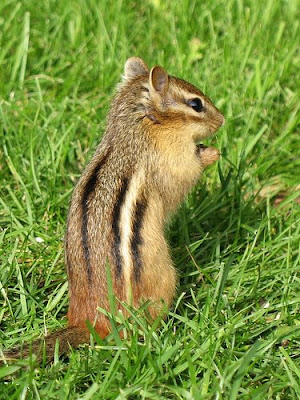 My early associations with squirrels and chipmunks came during childhood trips to neighbouring woods or government parks. A trip to the Rockies always meant feeding peanuts to the chipmunks found in the wood piles near picnic sites.

Chipmunks have 25 species in North America and one in Europe. Although I looked, I did not find any material on a chipmunk I saw near Barrie, Ontario one summer. The striped markings on the back were the same as other chipmunks, but this one had white dots between the lines on its back.

Squirrels are common in Toronto, adapting well to urban neighbourhoods and parks. One species I have seen frequently in High Park and mistook for a red squirrel is the Fox Squirrel. The Fox Squirrel is the largest species of tree squirrels native to North America with their natural range extending throughout the eastern United States, excluding New England, the southern prairie provinces of Canada and introduced to southwestern Ontario, west to the Dakotas, Colorado and Texas. They thrive best among trees such as oak, hickory, walnut and pine that produce winter-storable foods, nuts. 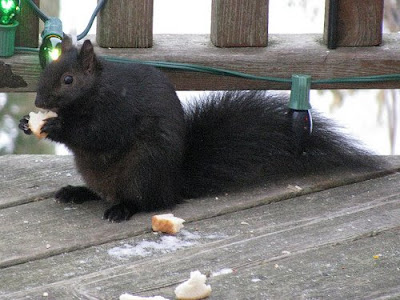 Black squirrels are a melanistic phase of the Eastern Grey Squirrel, and are commonly found in Toronto’s urban areas and parks. 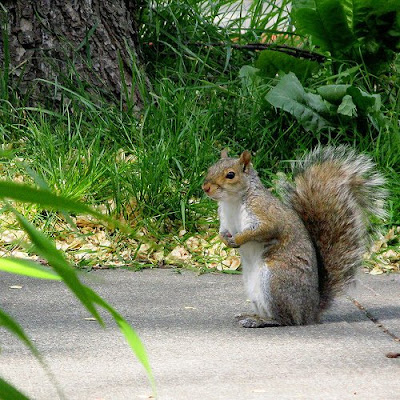 Canada’s Eastern Grey Squirrel was introduced into Great Britain and are now being culled in order that the Red Squirrels may increase their population. An important factor with feeding squirrels peanuts was revealed in Wikipedia:

“Urban squirrels have learned to get a great deal of food from over-generous humans. One of the more common and inexpensive foods fed to squirrels is peanuts. Recent studies however have shown that raw peanuts contain a trypsin inhibitor that prevents the absorption of protein in the intestines, therefore offering peanuts that have been roasted is the better option. However, wildlife rehabilitators in the field have noted that neither raw and roasted peanuts or sunflower seeds are good for squirrels, since they are deficient in several essential nutrients. This type of deficiency has been found to cause Metabolic Bone Disease, a somewhat common ailment found in malnourished squirrels.”

For feeding my neighbourhood birds and squirrels I tend to use the collected remains of the discarded seed my lovebirds and senegals leave. Often it is only a bite or a few nibbles from a peanut, walnut, almond or the complete feed pellets; and after being spread upon the ground outside it is often gone by the next day.

I've seen a lot of squirrels in my travels in the woods, but never a black one.

I'm quite fond of squirrels, actually. Pity we don't have them here in NZ...

thx barbara, had forgotten a lot of this... always had a fondness for chipmunks, but was never a huge squirrel fan, though they can be comical

of course, my alltime fave are the always goofy: chip and dale ;) lol

most birds, on the other hand, are great to see/hear....

Travis, the squirrels that I have seen in Toronto are predominantly black. The grey squirrels are outnumbered 10:1 although they are considered dominant.

Lots of squirrels here in Calif., though I don't think I've ever seen a black one, but not too many chipmunks. They're so cute. :) Enjoyed the post and the photos.

I've never seen black squirrels either! Here in this part of Scotland, there are actually some red squirrels left and people are always very excited to see them. The grey ones kill them off, and if just one more person tells me -- with a certain tone -- that the grey ones were imported from America, I may scream.

Mary, I read Scotland is working at culling the grey squirrels just like the Brits.

Well, North America became over run with House (English) Sparrows when they were introduced in the mid-19th century. They've flourished so much its believed there are 150 million in North America.

The gray squirrels have become so thick they are actually pests down here, and they keep the red squirrels populations down. They breed like squirrels for sure.

Charles, then it must be time for some grey squirrel pie and gloves. Or a bounty enforced. Before any animal activist starts up, deer, moose, etc. have quotas in their respective areas where a certain amount are licensed for hunters. This is to avoid over population so those in the area don't starve over the winter.

When I was last in Alberta there was still a bounty on gophers' tails: $2.00.

In just the past few years, black squirrels have moved into our area - and they are BULLIES!

Bernard, I'd never seen a black squirrel either until I moved to Toronto.

The grey and fox squirrels are extremely similar. Growing up in Montreal, I didn't see a black squirrel until I moved to Toronto. I prefer the grey squirrels - much nicer looking with fluffier tails. Ottawa has predominantly black squirrels.

Black squirrels are common here in Eastern Ontario - at least in my back yard.There are some black walnut trees nearby.
We had for a while a blonde squirrel as well as a black one with a red tail.

Bernita, it's interesting when nature changes its inhabitants through genetic mutations.

Is it possible that squirrel you couldn't identify...the one with the spots between the stripes on its back...was a juvenile of a familiar species? Maybe squirrels, like deer, have spots on them when they're babies?

Patti, welcome and thanks for visiting. You could be right, I'd never thought of that. Or, it's one of those 25 species of chipmunks.