[1] Shelley Munro and her husband are going on their holidays to the US and taking a special side trip to Campbell River, B.C., to see a grizzly bear tour. Shelley commented that they don't have scary animals in New Zealand. Are they in for a treat!

Their tour guides will take excellent care of them, providing instructions on what to do and what not to do. [2] The grizzly bear (Brown Bear) has the reputation of being the most ferocious and dangerous mammal in North America. Grizzlies vary widely in body shape, colour and in the shape of their heads. The tundra grizzly is often creamy yellow on the back with brownish legs and underparts. In the Rocky Mountains, the "silver-tip" phase is dominant. Adults weigh from 136 to 526 kg and are prodigiously strong. 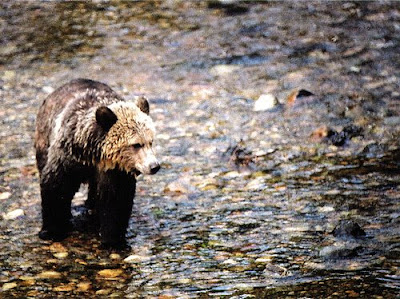 [3 - Campbell River fishing]
Grizzlies when irritated will sometimes shift their weight back and forth on their front legs before "roaring" (which is very loud) in the hopes of scaring off the intruder. Or they will get up on their hind legs to see better over the terrain. They have an excellent ability of scent detection.

Although grizzlies will, for the most part, avoid contact with humans, they are sometimes unpredictable and should be given plenty of room. They move with a slow shambling walk, the low-slung head swinging from side to side. They can move very quickly, however, and even horses find it difficult to evade a rushing grizzly. [4] This powerful animal once inhabited almost all of western North America but, with the advent of the Europeans, their numbers were reduced until now they are restricted mainly to the Canadian Rockies and Alaska, and in reserves in Montana, Idaho, Wyoming and Washington, USA. The grizzly's preferred habitats are deserted rivers, wild mountains, thick and dense forests, open meadows, and large valleys. Its favorite food is fish, so the grizzlies are mainly found by deserted rivers. [6] Grizzly bears are very strong and large animals. Their size and weight are variable depending on the availability of food, and the climatic conditions. The adult bears stand approximately 100 cm tall on all four legs. Their body length is just over 200 cm, and their weight varies from 330 to 825 pounds. Grizzly bears have heavy stout bodies with strong muscular legs. [7] They have a big head, short tail, small rounded feet and ears, and hind feet with five toes each. The grizzlies have a distinctive muscular shoulder hump, and the claws on the front paws are large, strong and slightly curved. The claws are brown and are used mainly to dig food, ground squirrels and mice. The length of the front claws are often 9 cm long. The grizzlies are covered with heavy shaggy fur. There are many different color phases including black cinnamon, red, blond or a mixture of these colors. The name “Grizzly” comes from the silver tipped grizzly hair that the bears develop when they are older. Grizzly bears are usually peaceful animals. They try to avoid a fight and run from danger, but they are short tempered and get angry easily and quickly. They are fierce fighters and will attack anything that seems to threaten them or their cubs, food or home. The grizzly is a very protective animal. They will become violent if their cubs are attacked. If it is cornered or attacked, it can be very dangerous. 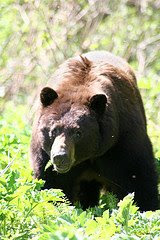 [9] The grizzly bears’ diet consists of vegetable matter: berries, flowers, grasses, sedges, herbs, tubers, nuts of all kinds; animal carcass, fish, small marine animals, ants and other insects, honey, elk, moose, calves, and other small animals such as ground squirrels and marmots. Berries are the food that is responsible for a bear to attain the fat deposits necessary for survival during the denning period. The berries of choice are: buffalo berries, blueberries, huckleberries, cranberries, saskatoons, and crowberries. Because of their large size, grizzly bears regularly have a high caloric intake of food in order to maintain their size; they will eat up to 36 to 41 kilograms (80 to 90 pounds) of food per day. They are able to gain 11 to 23 kilograms (3 to 6 pounds) per day.

The breeding season for grizzlies usually occurs in June and July when the bears reach maturity around 5 years of age. The male chooses his mate and spends a month mating with her, then leaves to continue his solitary life. The female then finds or digs a den, where she will sleep through the winter. This is especially important for the pregnant female, whose cubs will be born during the winter. She will give birth to her cubs in January, February, or March (gestation takes 4 or 5 months). Average litter size is 2, but 4 is not uncommon. Weighing less than a pound, a newborn cub gains weight quickly from the rich mother's milk containing 33% fat. As they grow up, the cubs may increase their weight as much as 1,000 pounds. A deep bond unites a mother with her cubs, and she fiercely protects them from adult males and other predators, until they are 2 years old. Bears have a lifespan of 15 to more than 30 years in the wild.

Grizzly bears have few enemies except other bears and humans, when they go wandering into camp grounds. Grizzlies are hunted primarily as game animals throughout Western Canada in spring and fall. They are illegally hunted by both the landowners seeing the bears as a threat to their livestock, and poachers interested in their hides, teeth, claws and internal organs for the Asian medical market. For many years across North America, there has been voiced concern about the illegal killing of grizzlies, but there is a growing world medical market for bear parts, especially gall bladders; some poachers even film the death of the bear to show that the gall bladders are real.

In 1985, estimated populations of the grizzly were 1,200 in Alberta, 6,500 in British Columbia, and 4,000 to 5,000 in the Northwest Territories. The grizzly's population is gradually shrinking. The B.C. government estimates that hunting, poaching, and other human related activities are responsible for the deaths of 6,335 grizzlies every year. The natural life span of grizzly bears can be 25 years or more. Unfortunately, 95% of the grizzly bears who live past age 2 in North America die at the hands of humans from gunshots. People are the biggest threat to grizzlies not only because of hunters, but also because of the increasing human population and the resulting erosion of grizzly habitat.

That was very interesting Barbara. I didn't know how endangered Grizzlies were but I knew there were dangerous and could be very mean if cornered. (Of course, most animals will.) And, like humans, they are very protective of their loved ones.

Thank you, Barbara. Your post is wonderful! I loved the photos. Hopefully we will end up with some good photos by the end of our trip. It's very sad when animals are killed for the medicine trade. I have a real passion for tigers and their numbers are dwindling rapidly for the same reasons.

I hope to make it to Grizzly country for a bit of fishing dometime in the next few years.

Very interesting. They are powerful animals.

Your bear posts are wonderful. Thanks for taking the time to do them.

A great primer on Grizzlies. I love that pic of the bunch of them in the water. Very cool.

PretZel, Shelley, Travis, Linda, Bernard, Charles: I have always liked all species of the bear family, probably because they are distant relatives of man's faithful pal, the dog. A later post will be done on the Kodiak bear.

With the way our planet is shrinking in terms of human habitation, we have to ensure the other flora and fauna are taken care of for future generations.

Bears are the wild animal I fear the most.

Bernita: any of the carnivores in the wild hold my respect, as do elk, moose, deer, as they have very sharp hooves.

When I was young, an incident occurred at Johnson's Canyon campground where a woman had fed an elk something and then went to touch it; only to be killed by a blow to the head with the animal's forefoot.