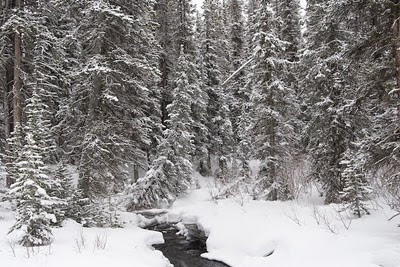 This photo was taken near Mt. Shark Creek in Kananaskis Provincial Park in Alberta.

The past few days have been mild for Toronto, and on Sunday afternoon freezing rain had been forecasted which resulted in me staying indoors.

For me winter is meant to have copious amounts of drifted snow, similar to that depicted in the photo, including frigid temperatures that require bundling up in downfill coats, toques, mittens/gloves, scarves, and boots with good tread on the bottom (preferably with warm woolen socks inside). I like it best at about -5F (-23C), as the snow will crunch underfoot and if the nose is exposed to the air acquires a numb feeling in a matter of minutes. Another feature at this temperature is the telephone and electrical lines hum.

Cold temperatures tend to keep influenza and cold bugs at a minimum, whereas warmer more temperate days produce a multitude of different ailments to afflict humans.

It looks so beautiful (and keeping influenza and cold bugs at bay is a plus) but I will admire from a distance. I grew up in New York and find I prefer the warmer climates these days. But still, what a Rockwellian landscape.

Love the typical winter pic. Meanwhile, it sounds like you miss the winter's here.

I love the sound of wires humming. We don't get to hear it often in California. Beautiful photo.

David, eastern winters tend to be damp while western winters are much drier. Thus aches do not appear often with weather changes.

Leah, that I do. Toronto needs a good long cold snap with deep snow. I expect some of the natives here would think otherwise.

Ronda, sometimes the wires hum in Toronto in the summer when the useage is up.

I love looking at all the snow, but my bad knees don't like the cold.

the humidity in southern ontario, mostly year round, forced me to leave

First, the photos are stunning as always, Barbara, but I loved your mention of the humming phone and electrical wires. You are such an observant person that it's no wonder you're a good writer, too!

Teresa, since I started having Reiki treatments my knees no longer ache in the cold.

Tony, I prefer a drier cold, too. Ontario's weather will become past tense for me in the next year or so.

Lana, winter for me isn't the same without snow and cold. Toronto still needs a good cold snap for the residents to appreciate their summers more.

I much prefer the cold and crispness of snowy weather than the wet and miserable winters we experience in South Australia. Only our eastern states experience snow and then it is on for one and all as the great exodus begins from every other state to the ski resorts.Wherever he taught in secondary schools, my husband was always in charge of the annual skiing school trips, travelling by bus from South Australia to Victoria, even from semi-arid country towns. Big responsibility for him, and a first glimpse of snow for many students. Your photo is stunning, and I'd just like to add that I think Reiki is wonderful.

Kia ora Barbara,
As I site here in the humid heat sweating, I gaze upon that photo, your words, and I think of my youth in Wisconsin winters, the snow crunching beneath my feet. Thank you.
Aroha,
Robb