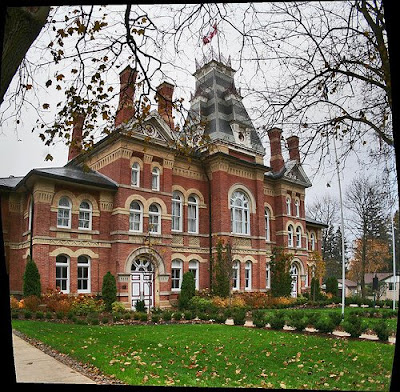 The Dufferin County Court House is located in Orangeville, north-west of Toronto.

According to the Ontario Heritage Foundation construction of this imposing brick court house was begun in the spring of 1880. Designed by C.J. Soule, a Guelph architect, it was built by the contracting firm of Dobbie and Grierson. Although the first provisional county council meeting was held here on November 24, 1880, the two-storey rectangular building was constructed to house the judicial and administrative offices of the newly created county of Dufferin was not completed until early 1881. Its impressive exterior is distinguished by a prominent central tower, projecting gable ends, irregular roof treatment and decorative white brick. Except for the additional of a new wing in 1973, the building remains largely unaltered, and still serves as the centre for the administration of justice in the county.

My Town Monday is the brainchild of Travis Erwin who lives in Texas. In early January he lost his home and household possessions in a fire. If you would like to offer support for Travis' family, go to Habitat For Travis. For the interim to see other members of the group to learn about their area of the planet go to see Chris here or Junosmom here.
Posted by Barbara Martin at 21:10

Hi Barbara - have caught up with your posts, and as always, learnt much.Tiffany Falls seems a "special" place, a bit mystical. The court house in this posting is very much like the buildings in Bendigo and Ballarat,in Victoria, built with the money from gold found in those Australian towns in the mid 1800's.I did a bit of research on these towns lately, and had fun doing so, as I do reading about your wonderful buildings and history. It's a delight to visit here.

I have you up. Thanks again for your perspective the other day.

Pam, you should join MTM once in awhile to show us bits of your country 'down under'.

Chris, you're quite welcome.

I love old buildings like that. They have so much more character than most of the modern ones. Thanks for the peek. :)

That would make a great puzzle picture.

what a wonderful building. Thanks for sharing.

Barbara, What a spectacular building! I love old brick buildings.

Yep, I agree this a really spectacular building love the brickwork thanks for sharing.Again this blog is fantastic (very informative)please keep it up
Philip.

Great building. I always learn something new from your blog.

An imposing building. It must cost a fortune to keep up, but looks like it is worth it.

Hi, saw your comment on Reader Wil's blog and the picture of that beautiful horse lead me to yours.
I'm a fellow horselover, so....
Is it a picture of your horse?

Your blog looks very interesting. Great pictures. And I used to love the Avengers too. Found it very scary sometimes. Think I used to watch from behind the couch. Seeing a re-run not too long ago, I wondered why ;-)

This is again a very informative post. Thanks for sharing and showing the facts of this grand old building.

This is a beautiful building,
Barbara. I always admire the craftsmanship of those fine old buildings.

I love that style. Me and the missus were wandering around Cornell the other day, looking at these brick, slate, stone buildings with the little doodads and were thinking it must a sort of late Victorian Gothic style or something....

http://en.wikipedia.org/wiki/index.html?curid=5473137
see what I mean? they're cousins alright!

That's a nice post and a even nicer gesture

The Court House looks great.
You know the most prestigious high school in my town looks similar, made of bricks and in function from 1899 :)
(http://en.wikipedia.org/wiki/File:Roman_colegiul_roman_voda.jpg)

This reminds me of buildings in Stratford. Must be from a similar time.

Gorgeous photograph, and interesting history. It's a great cause too.

Frank, this is the reason I post about the old buildings, to remind others of the architecture before it is lost.

Mary, thanks for dropping by.

Teresa, Ontario has tried to keep the old brick and stone buildings by listing them as heritage buildings, like this one.

Philip, nice of you to stop by. I hope you are doing well with your photography.

Barrie, are these photos giving you twangs inside...do you miss Ontario?

RuneE, I believe inside has had its updating over the years, and now that its listed on the Ontario Heritage Foundation the provincial government sees that the building is kept up.

Carolina, welcome and thanks for stopping by.

The horse photo is of a Quarter Horse I owned some time ago, and he's gone on to horse heaven now. He had an illustrious career from halter champion, western riding points, three-day eventing and dressage. He was one of those horses that only comes once in a lifetime.

Carolina, I think you have just experienced synchronicity.

Gary, I will look the architecture up and do another post so everyone will know.

Thomas, thank you and helping is necessary when the need is there.

Mihai, I notice a similarity in the windows. The stone masons may have learned from the same master or master masons who studied together elsewhere.

Patti, most of the stone and brick buildings in Ontario made between 1880 and 1905 have similar styling. As was the Old City Hall in Toronto I posted about previously.

I would enjoy living there.

What a great building. They certainly don't give the attention to detail like that anymore.

What a lovely building! Thanks for sharing. :)

David, Orangeville is a very nice town well away from Toronto (no smog).

L.A., the old century houses in rural towns of Ontario have gingerbread trim and were built about the same time as the court houses. I'll see if I can locate some photos.

I ran across this from the My Town Monday Blog List. What a beautiful building!

Lana, thanks for stopping by.

Lauren, welcome and thanks for stopping by. I hope you enjoy your visit, browse to your heart's content and come back for coffee or tea anytime.

Barbara, I love old architecture and am always glad to hear that buildings have been designated historic so they will be preserved.

Y'all have some great architecture.

Travis, the brick and masonry work is vastly superior to the glass and steel monsters found these days.