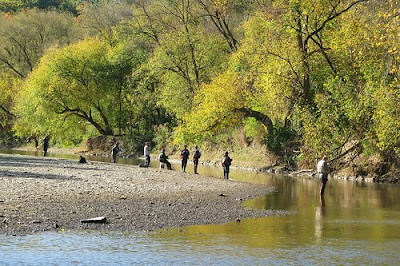 For fishing enthusiasts the Humber River is known for its salmon, small mouth bass and the presence of Brook Trout in the headwaters of the Humber. The high quality aquatic habitat in the Humber supports more than 50 species of fish.

The Humber River is one of two major rivers on either side of Toronto, Ontario, Canada, the other being the Don River to the east. The Humber River was designated a Canadian Heritage River on September 24, 1999. The Humber collects from about 750 creeks and tributaries in a fan-shaped area north of the city. One main branch runs for about 100 km from the Niagara Escarpment to the northwest, while the other major branch starts in the Lake St. George in the Oak Ridges Moraine near Aurora, Ontario to the northeast. They join north of Toronto and then flow in a generally southeasterly direction into Lake Ontario at what was once the far western portions of the city. 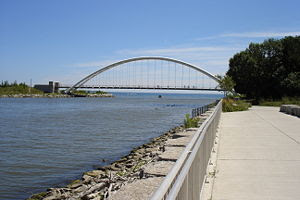 [2] This bridge is over the Humber River as it exits into Lake Ontario and is flanked by by Sir Casimir Gzowski Park and Humber Bay Park East. The bridge carries a cycling path over the river. Some weekends when I feel like taking a longer walk by Lake Ontario I come here.

The Humber has a long history of human settlement along its banks. Native settlement of the area is well documented archaeologically and occurred in three waves. The first settlers were the Palaeo-Indians who lived in the area from 10,000 to 7000 BC. The second wave, people of the Archaic period, settled the area between 7000 and 1000 BC and began to adopt seasonal migration patterns to take advantage of available plants, fish, and game. The third wave of native settlement was the Woodland period, which saw the introduction of the bow and arrow and the growing of crops which allowed for larger, more permanent villages. The Woodland period was also characterized by movement of native groups along what is known today as the Toronto Carrying-Place Trail, running from Lake Ontario up the Humber to Lake Simcoe and eventually to the northern Great Lakes. 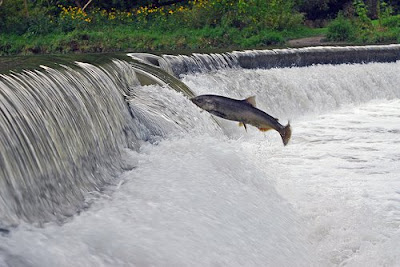 Étienne Brûlé was the first European to encounter the Humber while travelling the Toronto Carrying-Place Trail. Brûlé passed through the watershed in 1615 on a mission from Samuel de Champlain to build alliances with native peoples. The Trail became a convenient shortcut to the upper Great Lakes for traders, explorers, and missionaries. A major landmark on the northern end of the trail in Lake Simcoe was used to describe the trail as a whole, and eventually the southern end became known simply as "Toronto" to the Europeans. 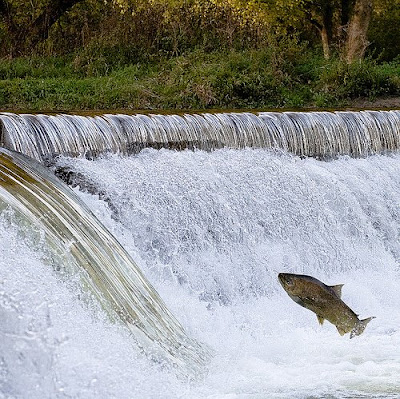 A fort was constructed about 1 km inland from the mouth of the Humber to protect the Trail. During the 1660s this was the site of Teiaiagon, a permanent settlement of the Seneca used for trading with the Europeans. Popple's map of 1733 shows a prominent river beside "Tejajagon" which we can only assume was the Humber. Its name is given as the Tanaovate River. French missionaries used the area for many years, including Jean de Brébeuf and Joseph Chaumonot in 1641, Louis Hennepin in 1678, and Rene-Robert Cavelier de La Salle in 1680.

However, no permanent European settlement occurred until the arrival of Jean-Baptiste Rousseau (not the famous author) in the late 1700s. Rousseau piloted John Graves Simcoe's ship into Toronto Bay to officially begin the British era of control in 1793. Most of the British attention was focussed to the east of the Humber, around the protected Toronto Bay closer to the Don River. Settlement was scattered until after the War of 1812 when many loyalists moved to the area, who were joined by immigrants from Ireland and Scotland who chose to remain in British lands.

By the 1840s, agriculture had developed suffiently to support a grist mill and a sawmill, both built by Joseph Rowntree.

As the Toronto area grew, the lands around the Humber became important farming areas and were extensively deforested; in addition, some areas of the river's flood plain were developed as residential. This led to serious runoff problems in the 1940s, which the Humber Valley Conservation Authority was established to address. But in 1954, Hurricane Hazel raised the river to devastating flood levels, destroying buildings and bridges; on one street, Raymore Drive, 60 homes were destroyed and 32 people killed.

Since Hurricane Hazel showed the land to be unsuitable for housing, it has been largely developed or redeveloped as parkland, with the extensive and important wetlands on its southern end remaining unmolested.

Today the majority of the Toronto portion of the Humber is parkland, with paved trails running from the lakeshore all the way to the northern border of the city some 30 km away. Trails following the various branches of the river form some 50 km of bicycling trails, much of which are excellent. Similar trails on the Don tend to be narrower and in somewhat worse condition, but the complete set of trails is connected along the lakeshore, for some 100 km of off-road paved trails.

There's nothing nicer than to walk by water.

a heron! we have one in the river behind us right now...and I am pleased to hear that your river is parkland, gorgeous!

it's been 'forever' since i visited these sites, barbara... thx for the memories

How lovely. An informative post, and the photographs are beautiful.

Sure makes me want to fish there.

This is an incredible post... I absorbed every single word and the photos are beautiful. How I wish I could wet my lines out there! Amazing area!
~Michele~

Bernita, yes, it gives a sense of peace to everything unless there's a strong wind and then the waves break onto shore just like at the ocean.

Gary, it's a great place for bird-watchers.

Tony, sometimes I forget there are nice places to see inside Toronto.

Charles, then my message for fishing Tuesdays is working.

Travis, you can imagine being at Old Mill with the sun overhead and listen to the water move along.

Michele, every place has its unique charms.