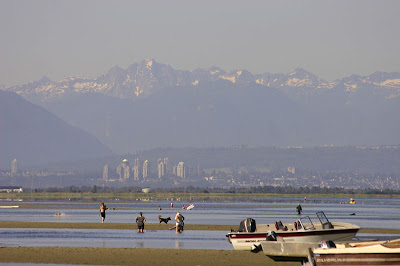 This photograph reminded me of a tragic occurrence during a visit to Maple Beach at Pt. Roberts, Washington in 1993 to see my brother. Taking my dog, Dwight, a Doberman Pinscher, for a leashed walk onto the beach at low tide I saw a couple allowing their German Shepherd puppy loose to run in the sand. Although I warned them about eagles in the vicinity they scoffed at my warning that a 3-month old puppy was about the size of a lamb could be swept away in moments with them unable to do anything.

Three days later it was in the local news, and the awful thing was the bald eagle that took the puppy had a nest atop the Douglas Fir in my brother's backyard. At first my brother was puzzled why Dwight refused to go outside onto the back deck, then it became apparent why. Even weeks later Dwight would look up at the tree to see if the eagle was there before going out. If the bird was there Dwight went back inside.

I spent a wonderful, relaxing three months at Pt. Roberts in 1993, and the photo reveals the beauty of the area.

I'd heard Eagles would do that but never knew anyone who had a reliable report on it. Wow.

Oh my goodness Barbara. I had no idea this sort of thing happened.I had some catching up to do with your posts, and was very interested in what you wrote a few posts back about British Columbia's central and north west coasts, Queen Charlotte Islands and Vancouver Island.One of my blog links, has a dreamboard going, where she has encouraged us to make up a board and think big. Your posting is my think big.More than anywhere, I would love to have the opportunity to visit the places you talked about on the August 12th post.

Charles, people forget that Bald Eagles are opportunists. Their preferred diet is fish; but they do eat other birds, rodents, squirrels, gophers, marmots or anything they can swoop down and kill or carry away. The photographer came upon the eagle feeding on the coyote quite by accident, not knowing whether or not the eagle had killed it.

Pam, it pays to keep a sharp eye out whenever one is near or in a wilderness area. Eagles do not attack humans that I know of. As for visiting the B.C. coast your dream may be closer than you think. Positive thinking while focusing on your intent may very well manifest it in some form.

while the ol fishhawk is a neat bird, my fave is still the golden... one must always beware with pets where eagles roam

I've seen owls on my area snatch a good size at without nay effort whatsoever.

Birds of prey are not to trifled with.

Tony, Travis: all too true with any predator, be it bird or animal.

Sorry i do not want to comment the predator, but I only want to tell you that the scenery is simply beautiful - fascinating! The beach, the city, the mountains - great!

Maria, that view over Boundary Bay is particularly nice. Although there is smog over Vancouver, every morning into mid-morning there can be a hazy fog that rolls in from the Pacific Ocean.

Welcom to my blog, enjoy your stay and browse as much as you like.