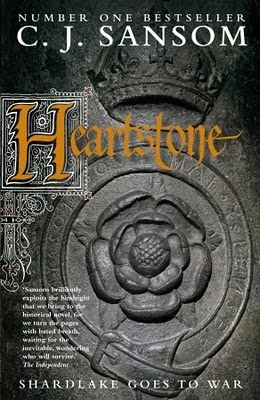 From inside cover flap:

“England is at war. Henry VIII's invasion of France has gone badly wrong, and a massive French fleet is preparing to sail across the Channel. As the English fleet gathers at Portsmouth, the country raises the largest militia army it has ever seen. The King has debased the currency to pay for the war, and England is in the grip of soaring inflation and economic crisis.

“Meanwhile Matthew Shardlake is given an intriguing legal case by an old servant of Queen Catherine Parr, which will lead him into the corrupt labyrinth of the King’s Court of Wards. Asked to investigate claims of ‘monstrous wrongs’ committed against his young ward Hugh Curteys by Sir Nicholas Hobbey, a Hampshire landowner, which have already involved one mysterious death, Shardlake and his assistant, Barak, journey to Portsmouth. Shardlake has taken the case, despite the imminent threat of invasion, as it also gives him the opportunity to investigate the mysterious past of Ellen Fettiplace, a young woman incarcerated in the Bedlam whom he has befriended and whose family once lived nearby.

“Arrived in Portsmouth, Shardlake and Barak find themselves in a city preparing to become a battle zone. The mysteries surrounding the seemingly normal Hobbey family nineteen years before, involved Shardlake in reunions both with an old friend and an old enemy close to the throne. Events will converge on board one of the king’s great warships, gathered in Portsmouth harbour, waiting to sail out and confront the approaching French fleet…”


This is C.J. Sansom’s fifth novel in the Shardlake series, two of which I have already read: Dissolution and Dark Fire I have the fourth: Revelation, waiting in the bookcase. What is nice about each of the books in this series is they are completely stand alone stories with little portions carried over from the previous ones. True to nature, Shardlake continues to have sympathy towards orphans and widows in poor circumstances. A stalwart defender of defenseless women: young or old; and the poor.

There is detailed historical fact woven to provide a rich tapestry behind the major plot and several subplots. The author goes into splendid descriptions of the countryside enroute to Portsmouth, the conditions of the soldiers preparing for battle with the French, the warships Great Harry and Mary Rose engaged in battle, the relationship Shardlake has with Queen Catherine Parr, including the politics of 1545.

There are secondary characters carried over from the previous novels: Jack Barak, Shardlake’s clerk, who helps with investigations of the legal cases taken on. To add domesticity, Barak’s wife, Tasamin, is expecting; and Guy, a foreign physician. New secondary characters, William Coldiron, Shardlake’s steward, with an interesting past; his daughter, Josephine; provide a look into the difficulties of having servants.

Bits of short recollections from previous books to keep the storyline cohesive are provided, such as a mention of Shardlake visiting “…Hampton Court, to see Archbishop Cranmer after having been falsely imprisoned in the Tower.” Each of these provides a link within to other characters who tend to have nefarious motives. Such as Sir Richard Rich, and defense lawyer, Vincent Dyrick.

While at Hoyland Priory investigating the allegations about Nicholas Hobbey’s ward, Hugh Curteys, Shardlake and Barak participate in a staged hunt in a deer park. An exciting thread with a stand off by a ten-point stag (though I wished the stag had done a bit more damage to the hunters before his demise).

Apart from the deer hunt, bodies start turning up resulting in new questions to be answered. With new investigating to be done, Shardlake lands in inevitable trouble, of one sort or another. He follows the twists and turns, coming up with a few red herrings, but all the questions are resolved with a satisfactory conclusion.

I thoroughly enjoyed this superb book though it took some time to get through the 600 plus pages as I tend to read slowly while savouring the moods the wording presents. I look forward to another in this splendid series.

C. J. SANSOM was educated at Birmingham University, where he took a BA and then a Ph.D. in history. After working in a variety of jobs, he retrained as a solicitor and practised in Sussex, until becoming a full-time writer. C. J. Sansom also wrote the bestselling novel Winter in Madrid. He lives in Sussex.

Amazon.com
Posted by Barbara Martin at 12:32

thx barbara, will look for it...

I've not read anything by him but it sounds interesting. GLad to hear the series stories can stand alone.

I have read a couple of the Matthew Shardlake books. This sounds like one for summer fun reading! Thanks for the review.

Barbara - just wanted to let you know we moved our blog after being hacked. We're at: www.synchrosecrets.com/synchrosecrets

Tony, you won't be disappointed. There are some surprises that should delight any reader.

Charles, I like this series for the historical detail, especially the weapons and ships.

Teresa, I'm sure you will like it. The detail within this story surpasses the others in richness.

Trish, thank you. It stands as a reminder to those internet users of the inherent dangers. I look forward to seeing you at your new site.

I do like the fact that each book is a stand-alone.