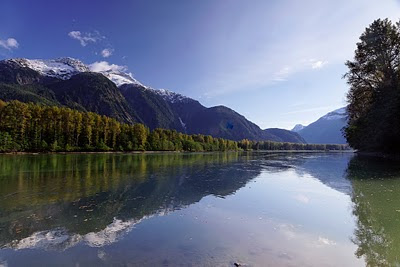 The Skeena River belongs to the Skeena Watershed in northwestern central British Columbia and has long been known as the “River of Mists”. From 1864 to 1912 it was used as a major waterway for steamboats.

The Skeena is well known for sport-fishing, particularly salmon of very large size such as a world record Chinook salmon of 92 and one-half pounds, a record Coho salmon weighing 25 and one-half pounds and a 36-pound steelhead. The types of pacific salmon that can be found in this river are: Chinook, Chum, Coho, Pink, Sockeye and Steelhead.

I'd like to do some sport fishing about now. Somewhere a long ways away from oil spills.

This river looks so peaceful. I'd like to go canoeing on it.

I'd love to take a steamship along the river.

Lovely for sure. Canada is blessed with scenes like this one.

As the environment suffers more pollution the crystal clarity of The Skeena is wonderful, reassuring and refreshing. Such a beautiful photograph Barbara.

Charles, this river is a long way from the Gulf.

Teresa, the Skeena River is the second longest river in B.C. The first being the Fraser River.

Leah, perhaps some tourist company might do so one day.

Patti, there are indeed.

Viola, this scene made me feel so much cooler in the current heat wave Toronto is experiencing.

Lisa, welcome. This part of B.C. is remote wilderness, a reminder of what the remainder of Canada once was before the European settlers came.

Pam, these places are also polluted though not quite to extent that more populated areas are.

It's such a beautiful the water must be very clean. reflection! If salmon lives in this river. Wonderful place for a fisherman.

I see that you have a lot of heat. We don't, but I would still have loved to be part of that scene.

Wil, fish adapt to pollution the same as humans.

RuneE, the humidex has been a killer since last week. There were a couple of nights of cooler temperatures but it's gone back up today. Yuck. With respiratory problems I am unable to go outside for very long due to the pollution. Now I have bronchitis from the humidity and the heat. My dehumidifier is working well though.

Seeing all your posts has really made me want to go visit Canada! Every picture looks more beautiful than the one before!