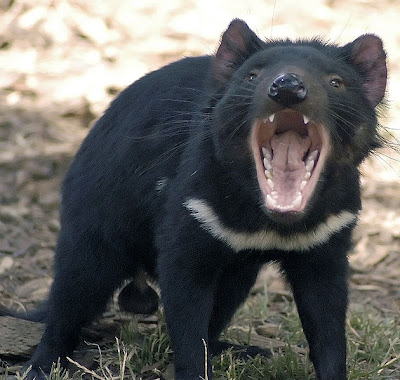 The Tasmanian Devil, at one time, covered all of Australia. The size of a small dog, but stocky and muscular, the Tasmanian Devil is now the largest carnivorous marsupial in the world after the extinction of the Thylacine in 1936. It is characterized by its black fur, offensive odour when stressed, extremely loud and disturbing screech, and ferocity when feeding. It is known to both hunt prey and scavenge carrion and although it is usually solitary, it sometimes eats with other devils. Now the animal is limited to the southwest of Tasmania in an endangered status because the farmers saw it as a threat to their livestock and poultry. It was exterminated in Australia from the bounty placed upon it by farmers, being hit by cars, and dingos competing for food.

Tasmanian Devils are widespread and fairly common throughout Tasmania. Found in all habitats on the island, including the outskirts of urban areas, they particularly like dry sclerophyll forests and coastal woodlands. The Tasmanian Devil is a nocturnal and crepuscular hunter, spending the days in dense bush or in a hole. Young devils can climb trees, but this becomes more difficult as they grow larger. Devils can also swim. They are predominantly solitary animals and do not form packs. They occupy territories of 8–20 km², which can overlap considerably amongst different animals.

Tasmanian Devils can take prey up to the size of a small wallaby, but in practice they are opportunistic, and eat carrion more often than they hunt live prey. Although the devil favours wombats, it will eat all small native mammals, domestic mammals (including sheep), birds, fish, insects, frogs and reptiles. Their diet is largely varied and depends on the food available. On average, they eat about 15% of their body weight each day; however, they can eat up to 40% of their body weight in 30 minutes if the opportunity arises. Tasmanian Devils eliminate all traces of a carcass, devouring the bones and fur in addition to the meat and internal organs. In this respect, the devil has earned the gratitude of Tasmanian farmers, as the speed at which they clean a carcass helps prevent the spread of insects that might otherwise harm livestock.

Eating is a social event for the Tasmanian Devil. Much of the noise attributed to the animal is a result of raucous communal eating, at which up to 12 individuals can gather, and can often be heard several kilometers away. A study of feeding devils identified 20 physical postures, including their characteristic vicious yawn, and the 11 different vocal sounds that devils use to communicate as they feed. They usually establish dominance by sound and physical posturing, although fighting does occur. Adult males are the most aggressive, and scarring is common from fighting over food and mates.

Because they were seen as a threat to livestock in Tasmania, devils were hunted until 1941, when they became officially protected. Since the late 1990s Devil Facial Tumour Disease has reduced the Devil population significantly and now threatens the survival of the species, which in May 2008 was declared to be endangered. Programs are currently being undertaken by the Tasmanian government to reduce the impact of the disease.

Some Tasmanian Devils are kept in zoos so humans and other animals cannot kill or hurt them. Now zoos are trying to keep the captive animals safe from the spread of Devil Facial Tumour Disease which produces tumorous growths on the face and muzzle. The disease spreads through biting—a common practice in Devils as they are natural fighters, battling tooth and claw for every morsel of food.

It is so sad when species go to extinction. This are unrecoverable losses :(

Barbara, these little devils in Tasmania are adorables, in fact it does everything to make that species continues.
Thank you for this interesting post.
François

Did catch me by surprise though seeing that it's a bit off the usual Canadian theme!

The Fairy Creek Falls you introduced in your previous post looks as if it were quite a strenuous walk to reach the top, but worth every effort. Thank you for letting us know about this treasure! :-)

Dark Wolf, I feel for the animals of our planet. From what I have read about the Devils is the cancer that is running rampant may be caused by their inbreeding due to limited numbers.

François, they may be cute, but they are quite vicious, preferring to fight.

J.L., I'm posting about these wee cleanup artists because they are close to becoming extinct. There may be a slight chance of saving them from this dreaded cancer that spreads quickly.

Merisi, one only looks at Fairy Creek Falls from a distance. This latter part of the hike is relatively easy compared to the previous climbs earlier on in the series.

I like this particular hike because of the campsites within close proximity of each other where you could choose to take it slow if desired.

They are certainly cute, but I don't think I'd try to pet one. I hope they don't go extinct. Marsupials typically just don't do well against natal species. the Possum is an exception.

So much wonderful information here about a topic I knew so little about. Thank you, Barbara :)

Interesting post, Barbara. I'm afraid I was only familiar with the cartoon variety. ;^)

These are amazing animals. We visited a sanctuary in Tasmania a few years ago. We were surprised at how noisy they were, and yes, they did smell! It was fascinating watching them. The owners of the sanctuary went around collecting roadkill every day to feed them.

Charles, for their size, the mouthful of teeth would put me off, too.

L.A., after learning about the Tasmanian Devil in grade school, I never thought much about them until this news report.

Willow, now you know the story behind the cartoon.

wonder if they're related, in some small way, to our wolverine?

He is so cute! It's really tragic to see how many species are threatened right now. I just did a paper for a class, on biodiversity loss and human impact. We are causing the largest mass extinction now, and unless something changes on a large scale, this can't be averted. It's so sad. Good post.

Shelley, they remind me a little of piaranhas.

Tony, I do too. The white slash marking on their chests reminded me instantly of wolverines. Perhaps they are a cousin.

bindu, welcome, thanks for stopping by.

Humans worldwide seem not to understand that we will be on the way out too.

Great pictures of the Devil, and as usual a very informative article.