Day 3 can be a rest day or used for hiking trails in the surrounding area. If one elects to stay for a few days at the Mt. Assiniboine Lodge, there will be a guide for different levels of hiking trips and returning at night. A plus in staying even two nights are home cooked gourmet meals and hot showers to invigorate a hiker on the next part of their journey; as well as having a guide for the more advanced hiking areas that are listed below. A link to Mt. Assiniboine Lodge is on the sidebar under CONSERVATION and NATURE. 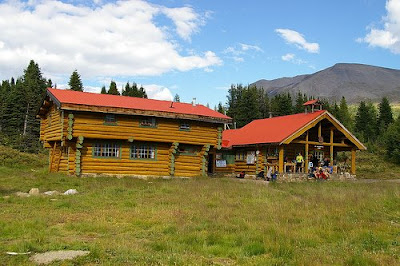 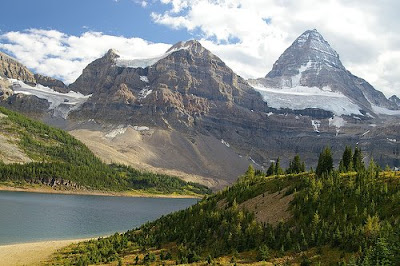 The mountain was named in 1885 by George Dawson who first saw it from Copper Mountin on the south side of the Bow Valley west of Banff. According to Ken Jones, the first warden at Mount Assiniboine Provincial Park, when Dr. Dawson first saw the peak from Copper Mountain there was, as is often the case, a plume of cloud trailing from the summit. This reminded him of the plumes of smoke that he had seen from the teepees of the Assiniboine Indians and this led to his choice of the name Mount Assiniboine. 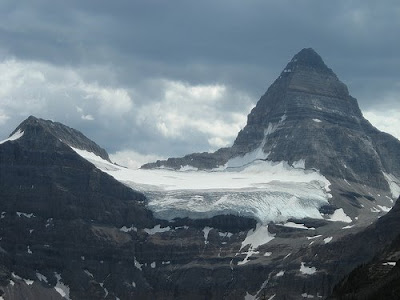 In 1893 Tom Wilson led the first group to the base of Mount Assiniboine. Robert L. Barrett was the client and he undoubtedly was hoping to make the first ascent but no attempt was made to climb the mountain probably because the trip was undertaken late in the season. In a letter to Tom Wilson some years later after visiting the Himalayas, Barrett wrote, “K2 at 28,000 feet didn’t look as high and imposing and terrible as Assiniboine….”

In 1895 Barrett returned to the Mount Assiniboine area with Walter Wilcox, J.F. Porter, and guide Bill Peyto. Wilcox wrote that, “Great interest had aroused tourists in the summer of 1895 by reports of a remarkable peak south of Banff named Mt. Assiniboine. According to current accounts it was the highest mountain so far discovered between the international boundary and the regions of Mount Brown and Mount Hooker. Besides its great altitude, it was said to be exceedingly steep on all sides, and surrounded by charming valleys dotted with beautiful lakes.” After reaching the base of the mountain, they decided to circumnavigate the immense mountain in order to view its hidden southern slopes. According to Wilcox, the trip was “attended by considerable hardship,” as it became a 46 hour, 51 mile struggle involving travelling over downed timber, at times ten feet off the ground, through burned out forests that turned them, “black as coal heavers,” and a 500 foot slope that, “appeared nearly vertical.”


There is a campground located at the north end of Og Lake, approximately 5 km from Lake Magog. This campground is equipped with 7 tent pads, an outhouse, and a central cooking area with food storage lockers and a grey water pit. A fee of $5 per person per night is charged. Water is available from Og Lake.


There are three informal day-hike "routes" heading out from the core area of the park that have evolved over the years. For the most part, these routes are without trails, but they do offer tremendous opportunities to view the park. It is recommended that only hikers with good bushwacking and compass-reading skills attempt these hikes. 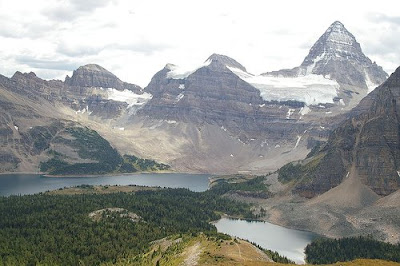 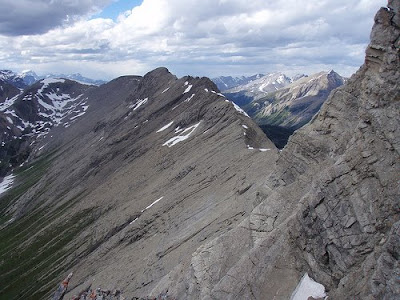 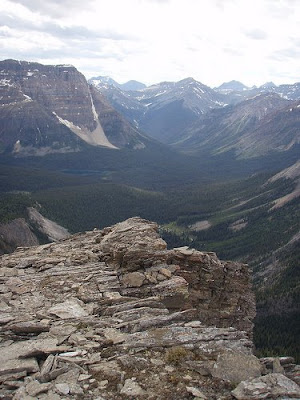 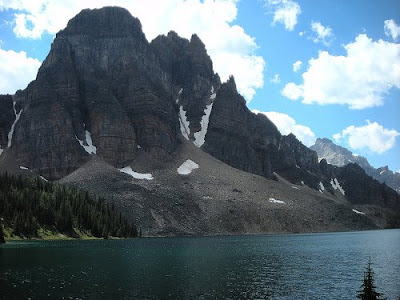 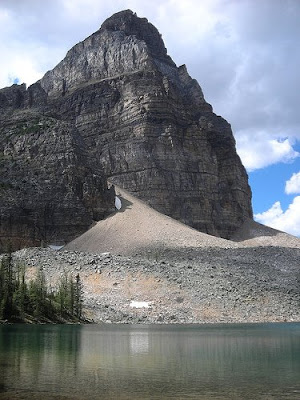 Og Valley (East): Follow the trail to Og Pass and then continue along the trail to Windy Ridge, descending from the ridge via the smooth rock slope to the north end of Og Lake, then following the trail back to your starting point. 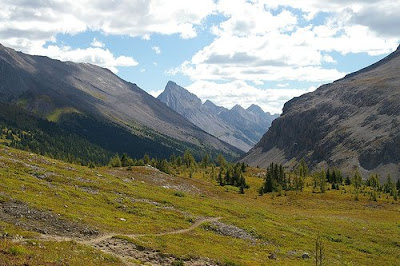 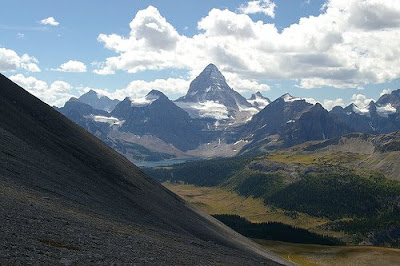 [10-Windy Ridge has sheer drops on both sides]

The hiker will descend from Windy Ridge down a hanging valley to a halfway hut.

Og Valley (West): Follow the trail to Og Lake, branch off and head for either: 1} the pass between Jones Hill and Nub, or 2} the ridge at the eastern toe of Jones Hill. Either route brings you out into Nub Basin. From here pick a route down through to the main valley. 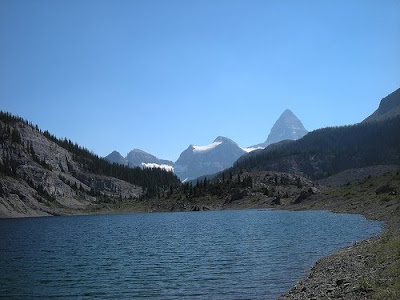 came here from the Golden Puppy - Reya's lovely site.
These landscapes are mind blowing! mountains are so powerful.
thank you - Canada calls!

Charles, more hikers and climbers are now posting their photos where the viewer has a sense of height and magnificence of the mountains. I have seen a few where the sensation of looking down a drop actually causes my stomach to sink. The photos posted of Windy Ridge is a place I would not be due to the exposed location and the sheer drops on both sides. My preference is tidy paths up to the treeline.

that Og Pass Trail shot of the valley, WOW

Love it when you do this. Mountains are my favorite. Right now they better be since Kabul is at 6000 feet and surrounded by mountains.

I always look forward to your next installment.

love it all, barbara

just heard on the radio this morning there are some spectacular views in the cape breton 'mountains', and the mabou area, too

again, places i've not been yet...

After all this beauty, I am tagging you with a meme tomorrow. Don't feel obliged to do it but the woman who tagged me is a nice one. Six quirky things about yourself. You can see the whole thing on my blog tomorrow.

Val, thank you for your kind comments. Your own site "Curlew Beach Lodge" is wonderful in its own right as a sanctuary for African animals. I have inserted it into my Conservation link on the sidebar. A very worthy cause.

Sekhar, I am hoping to be able to visit there next spring or summer and enjoy the refreshing brisk mountain air.

Gary, that trail certainly holds the same appeal to me.

J.L., thank you for your kind comments.

Tony, if they are hiking trails in Cape Breton, and I am certain there are, I will do a post laced with history.

François, very nice of you to visit.

Patti, it was bound to happen to me. Quirky things related to me...jmmm...well, the name Barbara means "the stranger"; but I'm quite certain I will be able to come up with six other quirky things.

there hiking trails indeed, some accessible by suv only, so that may deter many folk....

Ok, I admit those mountains are bigger than the ones in the Harz National Park. But some of the paths don't look any better than pic 6. :)

I wish I could take photos that show the fall of a cliff, but I don't like to bow over the edge that far. Damn fear of heights - it makes me wonder I do mountain hikes in the first place, but overall I'm enjoying them.

Gabriele, you might try an angle from below or above if the trail has switchbacks.

Many hiking paths in the Rockies are animal paths first, human second. But hiking is good for the soul, and the photos you take of the castles are superb.