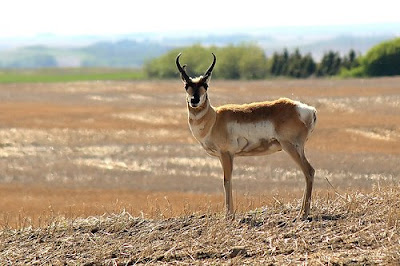 
Once on a business trip to Medicine Hat, Alberta, I had hoped to see these antelope, and despite searching the brown and slightly green fields long the highway saw nothing. When another driver cut me off after passing I honked my displeasure, and out of the side vision of my eye something jumped. Glancing over I saw a leaping, bounding shape of tan that blended in with the tall dry grass stalks with the telltale black markings on the head and horns. Several others followed, although I slowed and moved over onto the shoulder to watch them bound across the flat prairie. They seemed to be matching the speed of the vehicle ahead so I resumed driving on the highway, and to my surprise they were running slightly over 60 mph while keeping up for some time before veering off to head cross-country in a different direction.

In Canada and the United States, the conservation status of the Pronghorn Antelope is of lower risk or least concern; with the exception of northern Baja California Sur where it is listed as Critically Endangered. The wild population there is estimated at 200.

The pronghorn antelope (Antilocapra americana), is native to interior western North America. Males weigh 40-60 kg (88-132 lb), while the females are slightly less at 40-50 kg (88-110 lb). The horns of the male are well developed, while the females tend to be small, misshapen or absent. The horns grow from the frontal bones of the skull, are shed and regrown on an annual basis. The horn sheaths are branched, each with a forward pointing tine.

Cougars, wolves, coyotes and bobcats are the major predators. Golden eagles have been reported to prey on fawns. 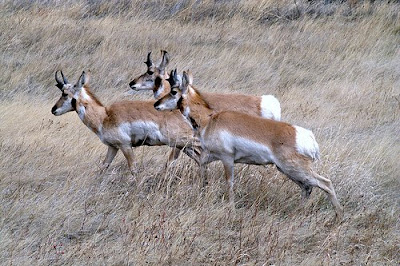 
As usual Wikipedia provided information I was unaware of, such as:

• Second fastest land animal, only to the cheetah, sustaining high speeds longer than the cheetah.

• It is variously cited as speeds up to 70 km/h (according to a study in Texas), 72 km/h (Smithsonian Institute, North American Mammals), or 86 km/h (AnAge).

• The pronghorn probably evolved its running ability to escape from the extinct American cheetah determined to be closely related to the Puma (cougar), since its speed greatly exceeds that of extant North American predators. The pronghorn’s ability for speed is much more than needed to outrun living American predators such as cougars and gray wolves.

• The pronghorn is a very poor jumper. Their ranges are often affected by sheep ranchers' fences. However, they can be seen going under fences, sometimes at high speed. For this reason the Arizona Antelope Foundation and others are in the process of removing the bottom barbed wire from the fences, and/or installing a barbless bottom wire.

• They were brought to scientific notice by the Lewis and Clark Expedition, when found in what is now South Dakota, USA. Their range extends from southern Saskatchewan and Alberta in Canada south through the United States (southwestern Minnesota and central Texas, west to northeastern California), to Sonora and San Luis Potosi in northern Mexico, with a small disjunct population in northern Baja California Sur.

• By 1908, hunting pressure had reduced the pronghorn population to about 20,000. Protection of habitat and hunting restrictions have allowed their numbers to recover to 500,000. There has been some recent decline, possibly due to overgrazing by sheep; pronghorn populations cannot maintain themselves successfully where sheep numbers are kept high.

• Pronghorns are now numerous enough that they exceed the human population in all of Wyoming and parts of northern Colorado. It is widely hunted in western states for purposes of population control and food, as the meat is rich and lean.

I have hunted thee fine animals before but probably will never do so again as the taste of the meat was poor. Didn't even make decent jerky, but I shot it so I choked it down.

those guys are absolutely beautful

Travis, you must have shot an older antelope, as a friend said the meat she had was tender and tasty. Perhaps they are like bear, the flavour had to do with whatever they ate. Bears taste gross if they have been eating meat, but not bad if they eat mostly plants and berries.

Gary, I like the set of prongs on the first antelope; standing there quite arrogant and watchful.

I did hear about Antelope. But Pronghorn Antelope is new to me.
Thanks for this nice piece of info.

they are tiny, but man can the move!

Sekhar, there are some animals in the world who are fleet of foot have dark facial or body markings in various sized stripes.

Tony, they are definitely fast movers.

Charles, my friend said pronghorn tasted like venison with the texture of goat. Pronghorns are closely related to goats, and I eat goat meat on a regular basis.

Thank you for your input on 11:11. I have been very intrigued since I am seeing it at least once, if not twice a day. What is your source for this info, may I ask?

Thanks for all your kind comments on my blog. I am adding you to my blogroll, so I can remember to visit you more often. :^)

Willow, your recipes are divine!

I've never seen a Pronghorn Antelope in the wild, but I certainly would like to -- especially if I had a camera handy. I had no idea they were so fast. Thanks for an interesting post.

We saw a lot of pronghorn during our travels.

Bobbie, they are very shy and will bolt in a moment.

Shelley, you vacationed right in their home territory.