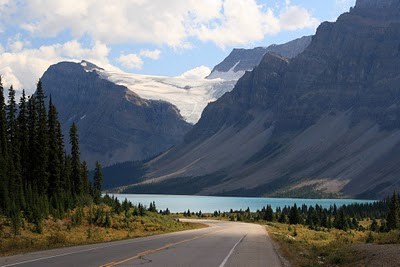 This hike is located in Banff National Park just off the Icefields Parkway. Please consider there is the possibility of rapid weather changes and take rain gear along as sudden showers are likely in and around the many icefields present in this area.

Distance: 4.6km one way, takes about 2 hours for one way
Elevation Gain: 155m
Trailhead: 36km north of the Lake Louise Junction on the Icefields Parkway. Turn off at the Num-Ti-Jah Lodge Access Road on the west side of the highway. The trailhead kiosk is 400m down this access road. 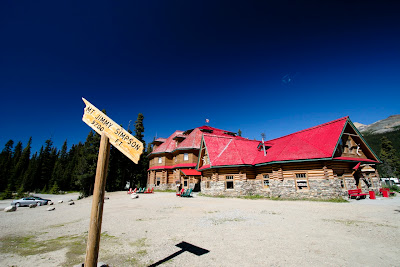 The mountain behind the lodge is Mount Jimmy Simpson 2966m (9730 ft) named after an early well respected outfitter who arrived from England in 1896, built the Lodge Num-Ti-Jah for his patrons. Jimmy Simpson died in 1972 at the age of 95. Simpson commented about the area: "There is absolutely nothing in the city to give us the same feeling as the great, mysterious things of nature even though they be stone and ice. It is only among them that we feel the utter helplessness and insignificance of ourselves."* 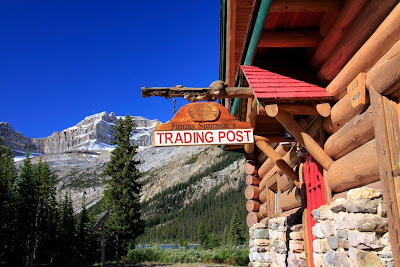 For those interested in staying at the Num-Ti-Jah Lodge I have provided the link. Though a bit pricey I think a full package with breakfast, packed lunch and dinner would be the ticket for a glorious stay of a night or two. 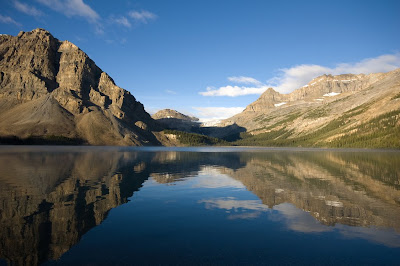 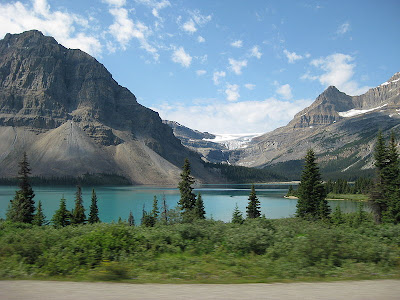 The pointed bump to the right of Bow Glacier is Portal Peak, 2911m (9550 ft) was named by Charles s. Thompson in 1916. This is in the direction the hike destination to Bow Glacier Falls.

The trail follows the northern edge of Bow Lake. 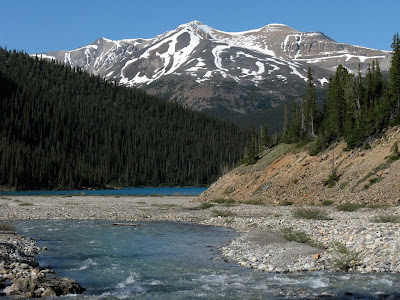 There are several bridges that cross streams. 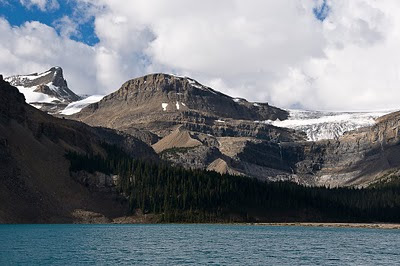 At the lake outlet there are gravel bars and a plain with the falls visible in the distance. 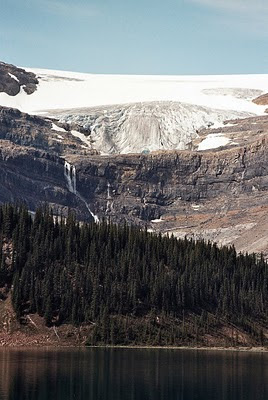 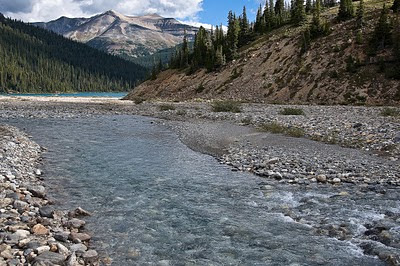 
At the end of the plain are a set of stairs needed to reach the falls. There are about 65 steps to the top, set in an irregular fashion. 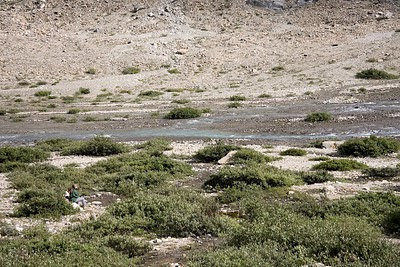 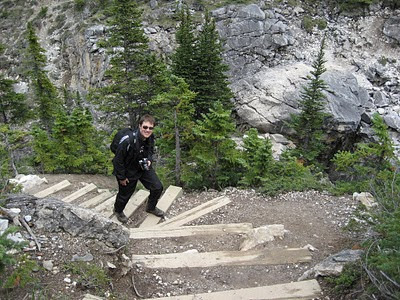 As the hiker ascends the stairs various views of the Bow River gorge can be seen. 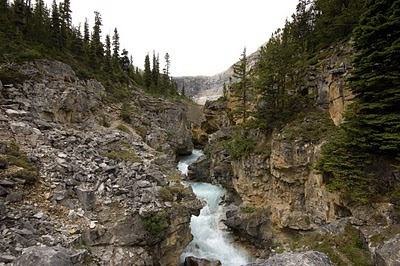 
It is near here, before the top of the stairs are reached , where a branch off trail to the left goes to the Bow Hut (run by the Alpine Club of Canada. or those considering this route there is a daunting bridge of a large limestone boulder that crosses the gorge.

Above the stairs the trail reaches a crest on a glacial moraine where there is a 45 minute hike to the falls. 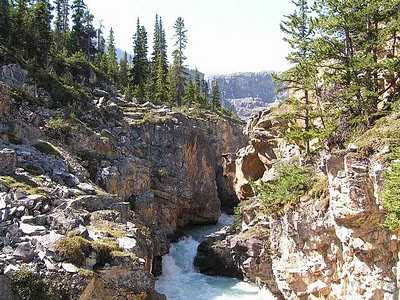 The falls originate from a fair sized lake below Bow Glacier which is unseen from below lying in a basin below the toe of the receding glacier. 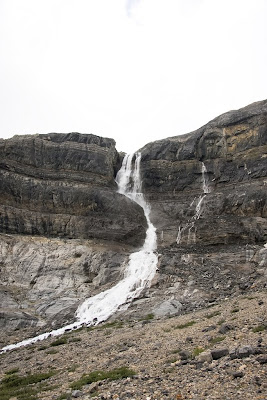 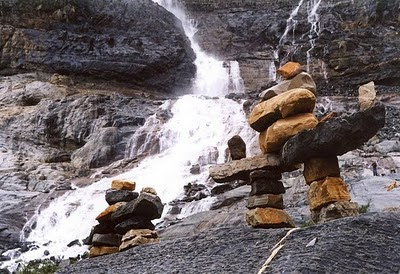 Bow Glacier Falls are the headwater of the Bow River. 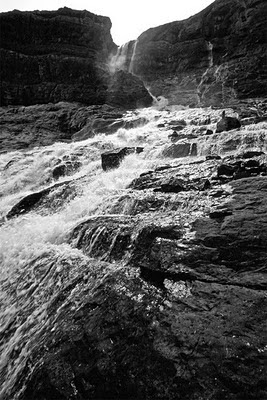 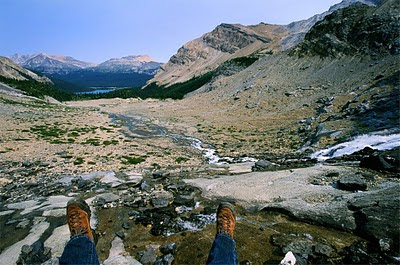 [17]- View from sitting near base of Bow Glacier Falls looking down to Bow Lake.

For those intrepid hikers who happened to carry along proper equipment and ropes a scramble up the rocks to the glacial lake at the toe of the Bow Glacier will reveal an awesome sight. 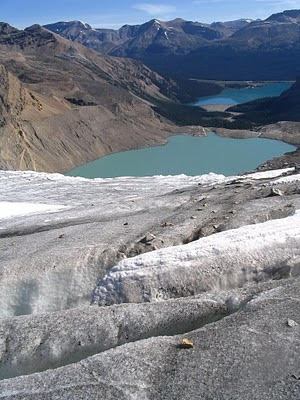 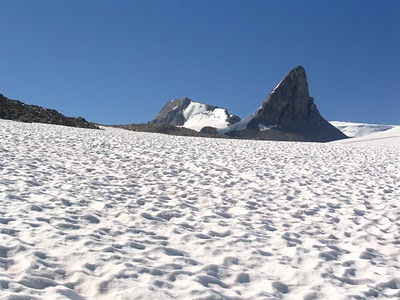 I love the patterns of snow you can see in the distant mountains!

These hikes always look so welcoming!

What stunning photos and dramatic scenery!

Thanks for posting these gorgeous pictures, Barbara. They are so refreshing after all the chaos in the news.

Gorgeous. I might give this one a try this summer.

Raph, I try to post the hikes that are easier to do, as there are some with trails that require a little more nerve as well as being difficult. Path finding is not one of my stengths. I like a well marked trail.

Trish and Rob, it's waiting for you should you desire to meander up from your warm place in the sun.

Teresa, glad to have you on the hike. This is my favourite place in the world, the Canadian Rockies.

Leah, the views are truly outstanding. The photos don't really do the area justice.

Charles, to think that Bow Glacier was on the flats at the turn of the last century. What a sight for visitors! But still, the view is incredible.

You're quite the photographer. You manage to capture the scenic beauty of the place and still chill me to the bone because it looks frigid, cold, and inhospitable.

Well, Michael, mostly I just choose my photos from other photographers to illustrate the posts. All the photo credits are listed below each post as to where I get them from.

However, snow and ice does provide a feeling of 'cold' even on a hot summer day. By the time one reaches the falls herein, cold water and a breeze over the ice cap above can do wonders in refreshing the tiredness within.

This is quite an interesting hike. Do you do these hikes regularly? You must be a real sportswoman!

You're taking my breath out of me!! =O I'm getting hot after seeing all these beautiful pictures!! (it's true!)

Stunning and gorgeous pictures and mountains!!!! =)

Wil, I don't hike as much as I would like to. I'm hoping to get out this summer.

Viola, there's nothing quite like mountains and icefields to get me excited. Except perhaps rolling foothills with snow capped crags behind.

Love these, makes you stop at each one to make sure you have missed nothing, thank you for posting ...