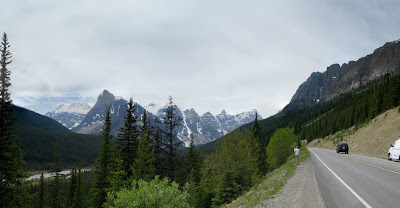 The closest town to Moraine Lake and the Consolation Lakes is Lake Louise in Banff National Park. 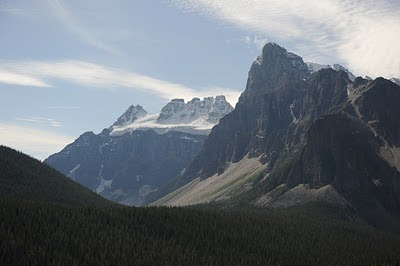 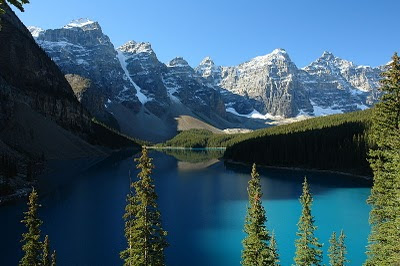 Moraine Lake is nestled in what is known as the Valley of the Ten Peaks. These are known as the Wenkchemna Peaks which are 3,000m (10,000 ft) high. 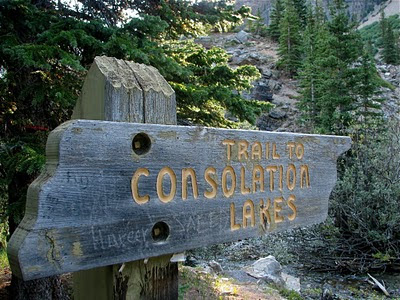 
This hike is considered easy to moderate.

This area is prime bear country and hikers are required to travel in groups of 6. A good recommendation would be to wear proper walking shoes or hiking boots as the terrain will be rough in spots and there is crossing of scree and bouider strewn areas.

The trail begins by crossing Moraine Creek at the southern outlet of the lake. 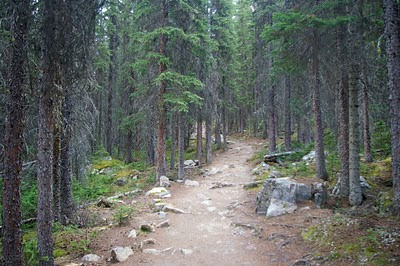 
The trail proceeds around the rockpile.

There is another trail here that leads up to the top for a nice view of Moraine Lake. 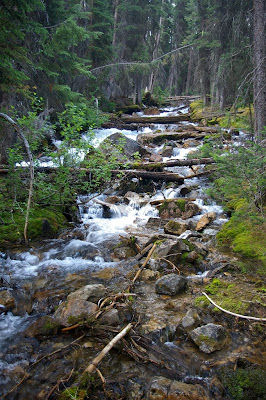 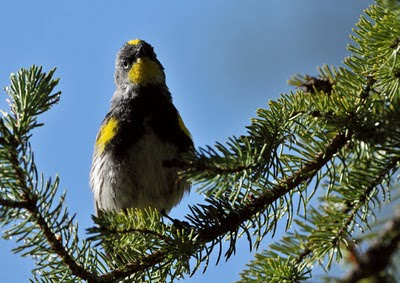 This bird was previously known as the Myrtle Warbler in the east, and Audubon’s Warbler in the west. In the summer these birds can be found across the top of the continent and they migrate to Central America in the fall. Its diet consists of bayberries, wax myrtle berries, insects, spiders, and fruit. During the breeding season it builds nests in confiers, laying 4 to 5 white eggs with brown and gray spots. The eggs are incubated for 12 to 13 days with the hatchlings leaving the nest in 10 to 12 days. Size 5 ½ inches.


The trail moves through subalpine forest of Engelmann spruce and fir.


Just before the Lower Consolation Lake the trail opens into a large lush meadow. 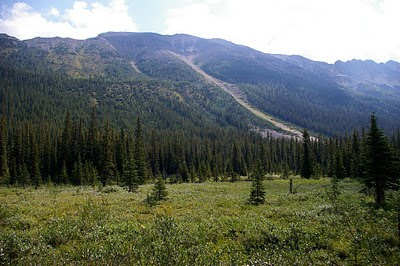 [8 - Meadow and Panorama Ridge to the east in the background]

Lower Consolation Lake is contained by a large rockslide from the Tower of Babel. 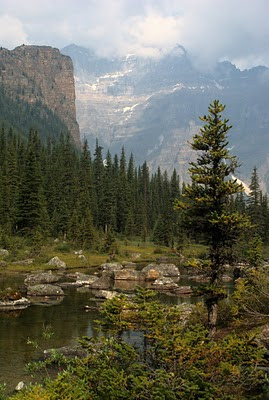 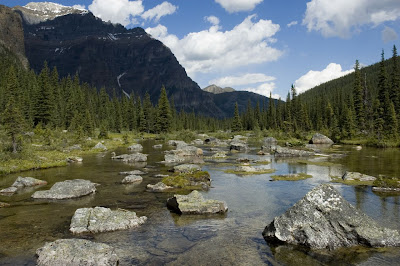 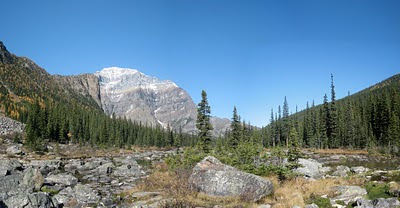 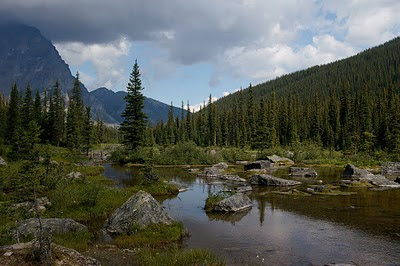 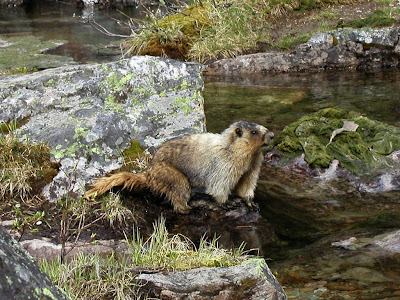 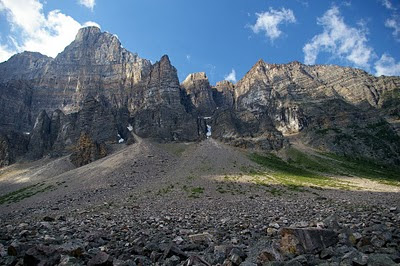 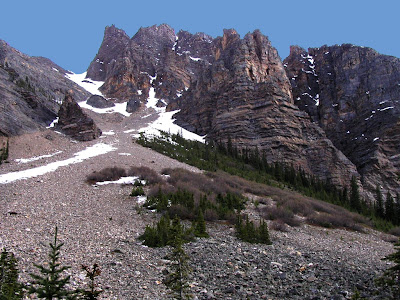 
Continue to Upper Consolation Lake by crossing Babel Creek where the trail follows a rather wet trail along the eastern shoreline and areas of scree that can pose a hazard to the unwary hiker. 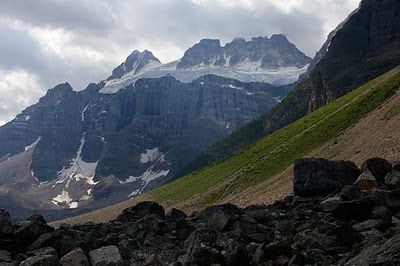 
The summits of Bident Mountain and the four peaks of Quadra Mountain rise from a spectacular glacier lying above steep cliffs at the southern end of the valley containing Consolation Lakes. 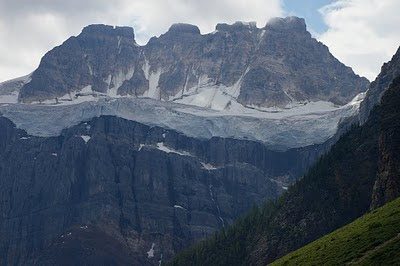 
Sources: ParksCanada, A Field Guide to the Birds of North America by Michael Vanner, Paragon, 2006, p.211.

What a wonderful hike. Thanks. I've missed your posts, Barbara. It's good to have you back.

No consolation "Prize" there. These are gorgeous.

A belated holiday's to you to my friend, as per usual your updates/blog look amazing and make me long for travel and adventure. I hope this new year is treating you well :)

This trail might even be suitable for me - except for the bears perhaps. Excellent area for photography!

(I'm enjoying the book, Barbara. Much thanks.)

Leah, this hike isn't too taxing on one's strength or ability to navigate slightly rough trails. The distance allows one to take in all the different views available.

Charles, have you decided on your vacation plan yet?

Josh, even if you are unable to get away please feel free to return for more inspiration.

RuneE, the bears tend to congregate here in late summer for the berries. The black bears are less unpredictable than their larger cousins: the grizzly. If the group makes enough noise the bears will often keep their distance, even moving away to avoid humans.

David, the birds are quite small and easy to miss. When I saw my first Cardinal I was urprised to see how small they were as I had thought they were Robin sized. By listening for birdsong or movement caught out of the corner of your eye, by cautious observation you will be able to see the smaller varieties of birds.

The Case of the Missing Servant should keep you chuckling throughout. I'm glad you're liking it.

I'm so glad you're back with your beautiful hiking posts and glorious pictures of mountains and forests and wild animals. I have missed the "beauty breaks."

Kia ora Barbara,
What an awesome tramp! I too have missed these virtual and rugged ventures into such beautiful country. It always brings a smile to my heart and whets my appetite for the mountains. Kia kaha e hoa.
Aroha,
Robb

Wonderful photos Barbara - I love clicking on them and enlarging the scenic vistas for effect. I always enjoy your posts.Thank you for sharing this beautiful part of the world.

Teresa, I hope to be able to continue as I search for good photos for other hikes. Banff and Jasper National Parks are favourite locations, mostly stemming from multiple trips during my youth.

Robb, then I'll have to find some more fascinating hikes.

Pam, I'm all for summer hikes as I'm caught in winter's grip with -22C overnight lows complete with windchill. Though I shouldn't complain after being raised on the prairies.

I'm sitting here, speechless.. how wonderful mountains and the lake!!
Thanks so much for sharing those photos! :)

Cloudia, I'll see what other photos I have with snow!

Viola, I have a few more new hiking trails to put together with new research that I'm certain you will enjoy.