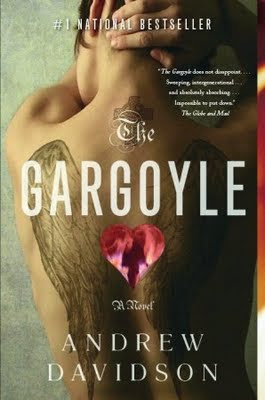 This is the first sentence to begin a compelling story of one man’s journey from hell to love.

The Gargoyle is a book of multiple genres: contemporary, historical romance, paranormal, spiritual and fantasy; containing layered messages with symbolism and mysticism. The main character is the narrator, an unnamed individual, telling the story of his redemption after a horrific car accident in which he is broiled alive.

Through the efforts of his kindly doctor Nan Edwards, therapist Gregor, and Sayuri, a cheery Japanese physio-therapist they begin to bring him back from the edge. Then a mysterious young woman, Marianne Engel, appears, whispering “Engelthal” and tells him this is the third time he’s been burned.

Despite his initial concerns that the woman is a lunatic, he learns from her that she had lived in the 14th century as a nun at the Engelthal Monastery in Germany, employed as a scribe. She also knows the origin of the scar over his heart, and is acquainted with him during several reincarnations.

He soon forgets his suicide plans, waiting for Marianne’s visits and her stories of their previous lifetimes together and other love stories from Germany, Japan, Italy and Iceland. Each of these is well written and researched with compelling, fascinating descriptions of locations and historical components.

It is about relationships that change, through art, love and inner soul growth: situations that determine who people are. The narrative weaves Dante’s Inferno with the love stories from the past into the present where the narrator finally understands Marianne’s compulsive obsession of sculpting gargoyles from cement blocks, finding comfort and strength to overcome his limitations.

I liked this book with its intense scenes, funny moments, and concepts that are thought provoking. It is best read slowly, to savour the information as it is revealed.

Barbara, thanks for the review. I saw the book at the bookstore and wondered if I'd like it. Now I think I might. It sounds fascinating.

Thanks for the run down on this book. All the things I am truly interested in appear to be in this story.

I think for me, a book like this would come down to the style of the language... Thanks for the review!

I too had seen this at the store and wondered about it. It sounds fascinating but perhaps too gruesome for my enjoyment. But maybe I'll take a chance on it given your review.

Gary, when I read about the chiseling of the cement I thought about your pottery craftsmanship.

Leah, it's an interesting book to read and take notes on how to put a story together with multiple POVs.

Linda, this complex book had many layers to keep me interested through to the end.

Ronda, Mr. Davidson did an excellent job with his research to provide rich detail with the backstory.

Patti, it has an excellent community aspect to it.

Shauna, though the injuries the narrator sustained and the medical procedures are well detailed leaving nothing to the imagination provides a promise that the narrative in the is equally descriptive and thought provoking.

Also, Mr. Davidson provides a bibliography on his research.

This book was in my TBR pile. Then I loaned it to my sister. Who just returned it when she was down here for a visit. And now it's back in my TBR pile!

Raph, I liked The Gargoyule because my interest never flagged, as it does in some books.

Barrie, you won't regret reading it. The love inside will make your heart sing.